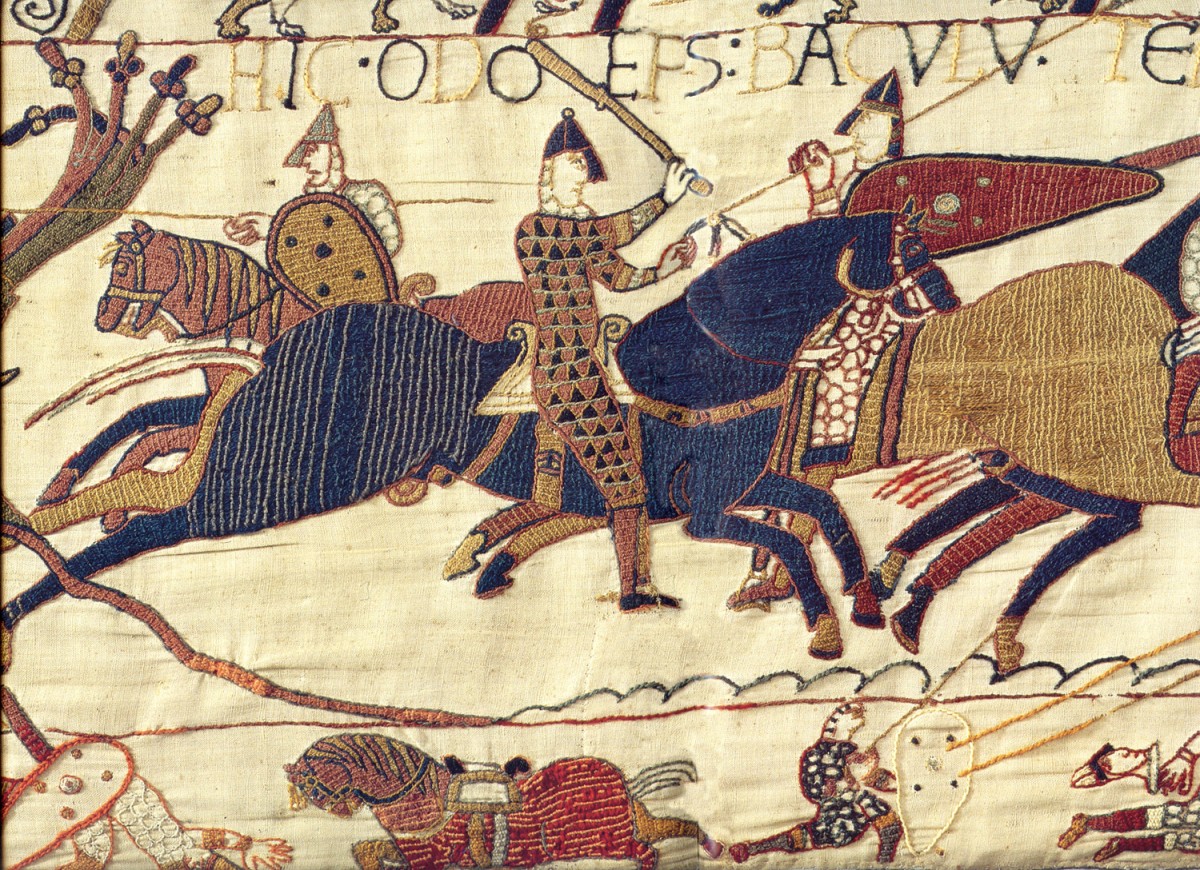 Designer of the Bayeux Tapestry identified

Was that Scolland, the abbot of St. Augustine's monastery in Canterbury, UK?

New research has identified the man who designed the Bayeux Tapestry, one of the most important artworks of the Middle Ages. According to historian Howard B. Clarke believes that this was Scolland, the abbot of St.Augustine’s monastery in Canterbury, and that it was made around the year 1075.

Clarke, professor emeritus at University College, Dublin, first presented his ideas at the 2012 Battle Conference, which was held at the French town of Bayeux, and now published in the journal Anglo-Norman Studies.

The Bayeux Tapestry depicts the Norman Conquest of England in 1066, when Duke William of Normandy defeated the English king Harold Godwinson at the Battle of Hastings. The tapestry is considered to be a major artistic source for these events, although its origins remain a hotly debated mystery.

The key to the discovery of the designer lies in scene 17 of the tapestry, which depicts Duke William and Harold, on campaign against Brittany, crossing the River Couesnon near the abbey of Mont St. Michel. The abbey, which is located on an island just off the Norman coast, is depicted in this scene, along with an individual in the top border who is seated and pointing. Sometimes medieval artists depict themselves as miniatures, and Clarke suggests that this is also the case here. The wording on the tapestry that accompanies this image suggests that this person is saying he had watched this very scene himself.

If this interpretation is accurate, this would make the designer to be someone associated with Mont St. Michel, and Clarke believes that this person was Scolland:

Back in 1064, the year usually assigned to the Breton campaign, Scolland had been a senior monk at Mont Saint-Michel, acting both as treasurer and head of the scriptorium. After the Norman victory at Hastings he, along with others from the same monastery, went over to England and was effectively appointed by King William as head of England’s senior Benedictine house [of St.Augustine’s in Canterbury] in 1070.

Clarke adds that there are several pieces of evidence which further link the Bayeux Tapestry with Abbot Scolland, including:

1) Scolland was the head of Mont Saint-Michel’s scriptorium, which oversaw the creation and illumination of manuscripts. The years 1040–75 are considered to be a ‘golden-age’ for manuscript illumination at the Norman abbey, which would have given Scolland a great amount of artistic experience.

2) It would explain why several of the early scenes in the tapestry focus on the Breton campaign, which isn’t considered part of the main narrative of the Norman Conquest, but would have been memorable to the monks of Mont St. Michel.

3) Two individuals who are depicted and named in the Bayeux Tapestry, Wadard and Vital, had links with monks of St Augustine’s and Scolland.

4) It has been suggested that the Tapestry’s frieze-like format and method of continuous narration may have been inspired by a triumphal monument like Trajan’s Column. It just happens that Scolland visited Rome in 1071-2, giving him the opportunity to have viewed Trajan’s Column.

Clarke believes that after returning from Rome to England, Scolland began the Bayeux Tapestry project, perhaps being commissioned by Odo, Bishop of Bayeux, who was a patron of the monks of St. Augustine’s. Over the next several months the monks and nuns of the abbey would have worked on the tapestry. Clarke writes:

“Assuming that the pieces were worked on simultaneously, the designer would have had overall supervision. We have to envisage either one large workshop or a number of adjoining rooms. An assistant may have had charge of each individual wooden frame holding a section while the work proceeded. This may account for some of the artistic and inscriptional variations that have been noticed. In that entirely practical sense, the Bayeux Tapestry is best understood as what we might call a team effort, but there must nevertheless have been someone in charge of the whole operation”.

The paper given by Clarke at the Battle Conference got favourable impressions from the scholars who attended the meeting. His paper, ‘The Identity of the Designer of the Bayeux Tapestry’ appears in Anglo-Norman Studies, Vol. 35 (2013), which is published by Boydell and Brewer.