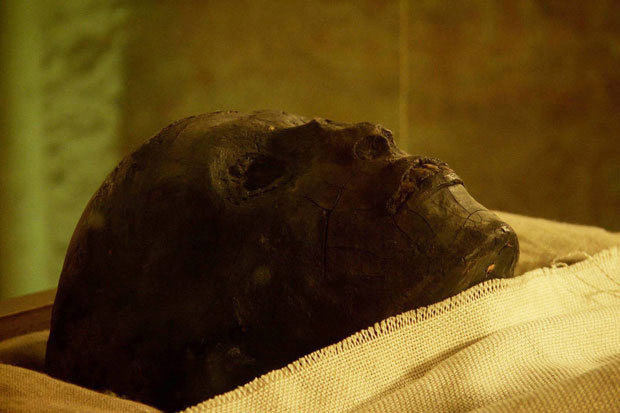 The mystery of King Tutankhamun's death

“Solved: The mystery of King Tutankhamun’s death. Crash injuries suggest he was the first of the boy racers”.

With the above title, newspaper The Independent is publishing an approach on the death of Tutankhamun. Far from new -its history dates from the ’80’s- the theory suggests that the pharaoh was killed in a chariot crash, followed essentially (according to researchers) by botched mummification that caused his body to get posthumous burning injuries.

As The Independent reports, Dr Chris Naunton, director of the Egypt Exploration Society, was intrigued when he came across references in Howard Carter’s records of the boy king’s body having been burnt. A clue came from Dr Robert Connolly, an anthropologist at Liverpool University, who was part of the team that X-rayed Tutankhamun’s remains in 1968. Among the bones in his office he recently found a piece of the pharaoh’s flesh – the only known sample outside Egypt.

Working with forensic archaeologist Dr Matthew Ponting, Dr Connolly used a scanning electron microscope to determine that the flesh had been burnt. Subsequent chemical tests confirmed that Tutankhamun’s body was burnt while sealed inside his coffin. Researchers discovered that embalming oils combined with oxygen and linen caused a chemical reaction which “cooked” the king’s body at temperatures of more than 200C.

Dr Chris Naunton said: “The charring and possibility that a botched mummification led the body spontaneously combusting shortly after burial was entirely unexpected, something of a revelation.”

Working with scientists from the Cranfield Forensic Institute, researchers performed a “virtual autopsy” which revealed a pattern of injuries down one side of his body. Their investigation also explains why King Tut’s mummy was the only pharaoh to be missing its heart: it had been damaged beyond repair.

The pharaoh’s injuries have been matched to a specific scenario – with car-crash investigators creating computer simulations of chariot accidents. The results suggest a chariot smashed into him while he was on his knees – shattering his ribs and pelvis and crushing his heart.

Whether a plausible scenario or just another piece of good media material, the new findings are to be shown on TV for the first time in UK’s Channel 4 documentary ”Tutankhamun: The Mystery of the Burnt Mummy’, on Sunday 10/11 at 8pm.