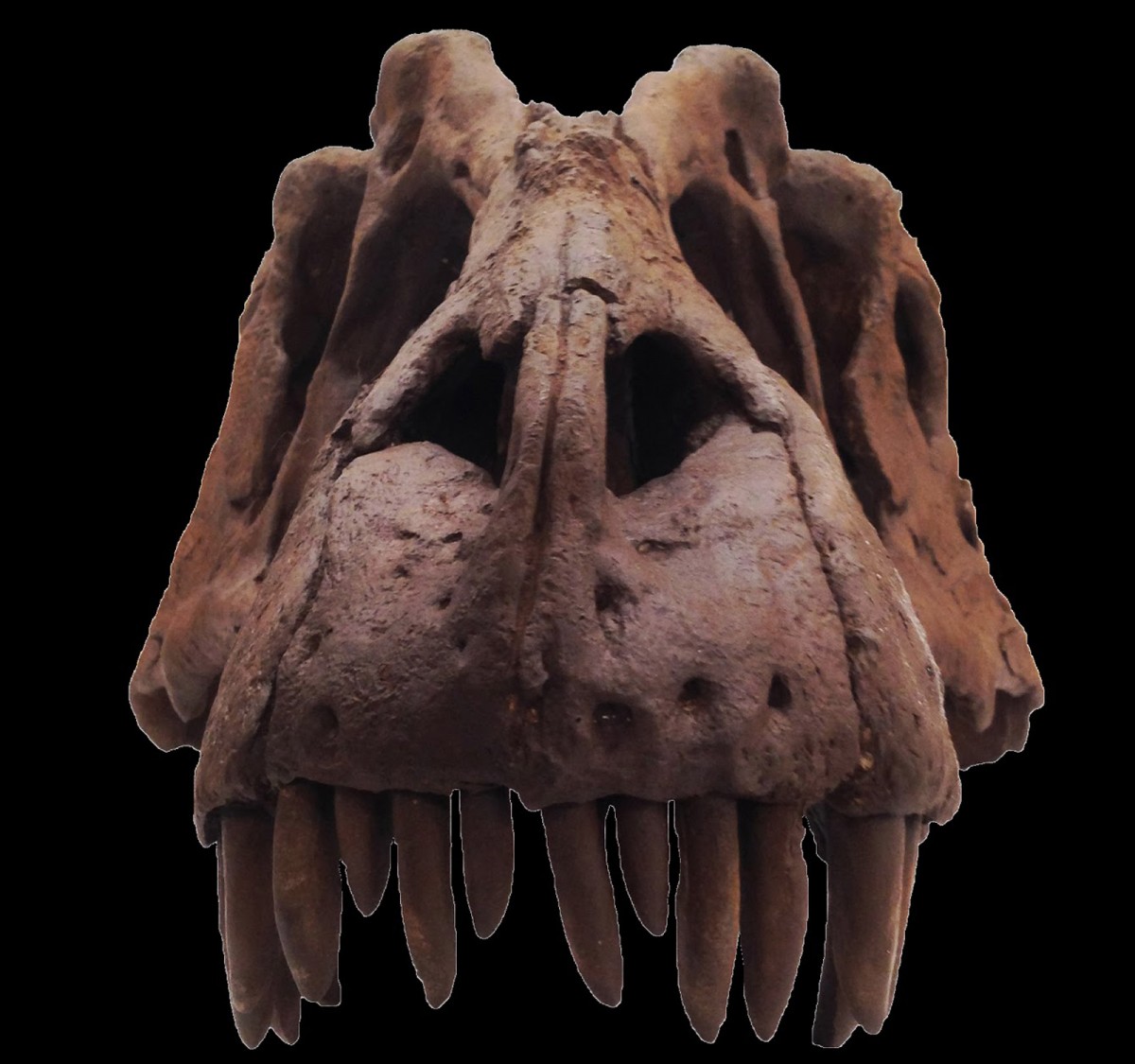 A remarkable new species of tyrannosaur that belonged to the same evolutionary branch as the famous Tyrannosaurus rex, has been unearthed in Grand Staircase-Escalante National Monument (GSENM), southern Utah, US.

The huge carnivore inhabited Laramidia, a landmass formed on the western coast of a shallow sea that flooded the central region of North America, isolating western and eastern portions of the continent for millions of years during the Late Cretaceous Period, between 95-70 million years ago. The discovery was announced today in the open-access scientific journal PLOS ONE and unveiled on exhibit in the Past Worlds Gallery at the Natural History Museum of Utah at the Rio Tinto Center in Salt Lake City, Utah.

The study, funded in large part by the Bureau of Land Management and the National Science Foundation, was led by Dr. Mark Loewen, research associate at the Natural History Museum of Utah, and adjunct assistant professor in the Department of Geology and Geophysics at the University of Utah. Additional collaborative authors include Dr. Randall Irmis (Natural History Museum of Utah and Dept. of Geology and Geophysics, University of Utah), Dr. Joseph Sertich (Denver Museum of Nature & Science), Dr. Philip Currie (University of Alberta), and Dr. Scott Sampson (Denver Museum of Nature & Science). The skeleton was discovered by BLM employee Scott Richardson, and excavated by a joint NHMU-GSENM team.

Among tyrannosaurs, the newly discovered species, Lythronax (transl. “king of gore”) argestes, possesses several unique features, a short narrow snout with a wide back of the skull with forward-oriented eyes. Previously, paleontologists thought this type of wide-skulled tyrannosaurid only appeared 70 million years ago, whereas the study of Lythronax shows it had evolved at least 10 million years earlier.

The new study also indicates that tyrannosaurid dinosaurs (the group of tyrannosaurs that includes T. rex) likely evolved in isolation on Laramidia. Lythronax stands out from its contemporaries in having a much wider skull at the eyes and a narrow short snout, similar to its relative T. rex, which lived 10-12 million years later.

Dr. Mark Loewen, the study’s lead author, noted, “The width of the back of the skull of Lythronax allowed it to see with an overlapping field of view -giving it the binocular vision- very useful for a predator and a condition we associate with T. rex.” Previously, paleontologists thought this type of wide-skulled tyrannosaurid only appeared ~70 million years ago, whereas Lythronax shows it had evolved at least 10 million years earlier.

Dr. Joseph Sertich stated that, “Lythronax may demonstrate that tyrannosaurs followed a pattern similar to what we see in other dinosaurs from this age, with different species living in the north and south at the same time.”

These patterns of dinosaur distribution across Laramidia lead the researchers to ask what might have caused the divisions between the north and south, given that an enterprising dinosaur could have walked from Alaska to Mexico if given enough time. Dr. Randall Irmis explained that by analyzing the evolutionary relationships, geologic age, and geographic distribution of tyrannosaurid dinosaurs, the team determined that “Lythronax and other tyrannosaurids diversified between 95-80 million years ago, during a time when North America’s interior sea was at its widest extent. The incursion of the seaway onto large parts of low-lying Laramidia would have separated small areas of land from each other, allowing different species of dinosaurs to evolve in isolation on different parts of the landmass.”

As the seaway gradually retreated after 80 million years ago, these differences in dinosaur species may have been reinforced by climate variations, differences in food sources (different prey and plants), and other factors. This hypothesis explains why the iconic Late Cretaceous dinosaurs of western North America are so different from those of the same age on other continents.

A Treasure Trove of Dinosaurs on the Lost Continent of Laramidia

Lythronax was discovered in Grand Staircase -Escalante National Monument (GSENM), which encompasses 1.9 million acres of high desert terrain in south-central Utah. This vast and rugged region, part of the National Landscape Conservation System administered by the Bureau of Land Management (BLM), was the last major area in the lower 48 states to be formally mapped by cartographers. Today GSENM is the largest national monument in the United States. Dr. Scott Sampson proclaimed that, “Grand Staircase-Escalante National Monument is the last great, largely unexplored dinosaur boneyard in the lower 48 states.”

During the past fourteen years, crews from the Natural History Museum of Utah, GSENM, the Denver Museum of Nature & Science, and several other partner institutions (for example, the Raymond Alf Museum of Paleontology and Utah Geological Survey) have unearthed a new assemblage of more than a dozen species dinosaurs in GSENM.

In addition to Lythronax, the collection includes a variety of other plant-eating dinosaurs — among them duck-billed hadrosaurs, armored ankylosaurs, dome-headed pachycephalosaurs, and two other horned dinosaurs, Utahceratops and Kosmoceratops -together with carnivorous dinosaurs great and small, from “raptor-like” predators such as Talos, to another large tyrannosaur named Teratophoneus.

Amongst the other fossil discoveries are fossil plants, insect traces, snails, clams, fishes, amphibians, lizards, turtles, crocodiles, and mammals. Together, this diverse bounty of fossils is offering one of the most comprehensive glimpses into a Mesozoic ecosystem. Remarkably, virtually all of the identifiable dinosaur remains found in GSENM belong to new species.