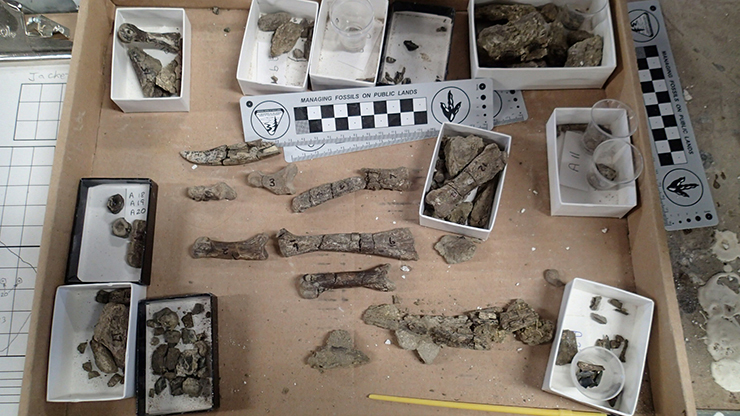 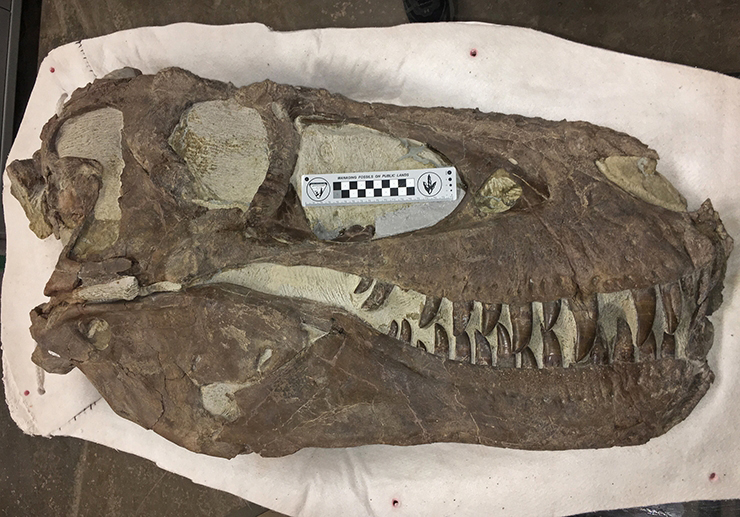 The fearsome tyrannosaur dinosaurs that ruled the northern hemisphere during the Late Cretaceous period (66-100 million years ago) may not have been solitary predators as popularly envisioned, but social carnivores similar to wolves, according to a new study.

The finding, based on research at a unique fossil bone site inside Utah’s Grand Staircase-Escalante National Monument containing the remains of several dinosaurs of the same species, was made by a team of scientists including Celina Suarez, U of A associate professor of geosciences.

“This supports our hypothesis that these tyrannosaurs died in this site and were all fossilized together; they all died together, and this information is key to our interpretation that the animals were likely gregarious in their behavior,” Suarez said.

The research team also included scientists from the U.S. Bureau of Land Management, Denver Museum of Nature and Science, Colby College of Maine and James Cook University in Australia. The study examines a unique fossil bone site inside Grand Staircase-Escalante National Monument called the “Rainbows and Unicorns Quarry” that they say exceeded the expectations raised even from the site’s lofty nickname.

“Localities [like Rainbows and Unicorns Quarry] that produce insights into the possible behavior of extinct animals are especially rare and difficult to interpret,” said tyrannosaur expert Philip Currie in a press release from the Bureau of Land Management. “Traditional excavation techniques, supplemented by the analysis of rare earth elements, stable isotopes and charcoal concentrations convincingly show a synchronous death event at the Rainbows site of four or five tyrannosaurids. Undoubtedly, this group died together, which adds to a growing body of evidence that tyrannosaurids were capable of interacting as gregarious packs.”

In 2014, BLM paleontologist Alan Titus discovered the Rainbows and Unicorns Quarry site in Grand Staircase-Escalante National Monument and led the subsequent research on the site, which is the first tyrannosaur mass death site found in the southern United States. Researchers ran a battery of tests and analyses on the vestiges of the original site, now preserved as small rock fragments and fossils in their final resting place, and sandbar deposits from the ancient river.

“We realized right away this site could potentially be used to test the social tyrannosaur idea. Unfortunately, the site’s ancient history is complicated,” Titus said. “With bones appearing to have been exhumed and reburied by the action of a river, the original context within which they lay has been destroyed. However, all has not been lost.” As the details of the site’s history emerged, the research team concluded that the tyrannosaurs died together during a seasonal flooding event that washed their carcasses into a lake, where they sat, largely undisturbed until the river later churned its way through the bone bed.

“We used a truly multidisciplinary approach (physical and chemical evidence) to piece the history of the site together, with the end result being that the tyrannosaurs died together during a seasonal flooding event,” Suarez said.

Using analysis of stable carbon and oxygen isotopes and concentrations of rare earth elements within the bones and rock, Suarez and her then-doctoral student, Daigo Yamamura, were able to provide a chemical fingerprint of the site. Based on the geochemical work, they were able to conclusively determine that the remains from the site all fossilized in the same environment and were not the result of an attritional assemblage of fossils washed in from a variety of areas.

Excavation of the quarry site has been ongoing since its discovery in 2014, and due to the size of the site and volume of bones found there, the excavation will probably continue into the foreseeable future. In addition to tyrannosaurs, the site has also yielded seven species of turtles, multiple fish and ray species, two other kinds of dinosaurs, and a nearly complete skeleton of a juvenile (12-foot-long) Deinosuchus alligator, although they do not appear to have all died together like the tyrannosaurs.

“The new Utah site adds to the growing body of evidence showing that tyrannosaurs were complex, large predators capable of social behaviors common in many of their living relatives, the birds,” said project contributor, Joe Sertich, curator of dinosaurs at the Denver Museum of Nature & Science. “This discovery should be the tipping point for reconsidering how these top carnivores behaved and hunted across the northern hemisphere during the Cretaceous.”

Future research plans for the Rainbows and Unicorns Quarry fossils include additional trace element and isotopic analysis of the tyrannosaur bones, which paleontologists hope will determine with a greater degree of certainty the mystery of Teratophoneus’ social behavior.

In stark contrast to the social interaction between humans and among many species of animals, paleontologists have long debated whether tyrannosaurs lived and hunted alone or in groups.

Based on findings at a site in Alberta, Canada, with over 12 individuals, the idea that tyrannosaurs were social with complex hunting strategies was first formulated by Philip Currie over 20 years ago. This idea has been widely debated, with many scientists doubting the giant killing machines had the brainpower to organize into anything more complex than what is observed in modern crocodiles. Because the Canadian site appeared to be an isolated case, skeptics claimed it represented unusual circumstances that did not reflect normal tyrannosaur behavior. Discovery of a second tyrannosaur mass death site in Montana again raised the possibility of social tyrannosaurs, but this site was still not widely accepted by the scientific community as evidence for social behavior. The researcher’s findings at the Unicorns and Rainbows Quarry provides even more compelling evidence that tyrannosaurs may have habitually lived in groups.