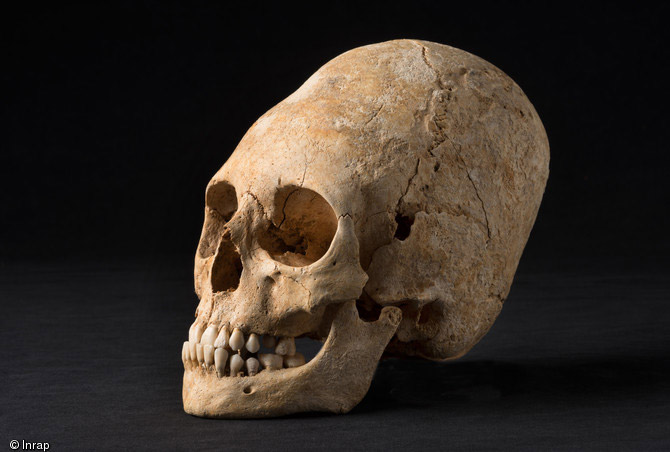 The skeleton of a woman whose head was warped into a deformed, pointy shape has been unearthed in a necropolis in France.

The necropolis, found in the Alsace region of France, contains 38 tombs that span more than 4,000 years, from the Stone Age to the Dark Ages.

The Obernai region where the remains were found contains a river and rich, fertile soil, which has attracted people for thousands of years, Philippe Lefranc, an archaeologist who excavated the Stone Age burials, wrote in an email.

Archaeologists first found the tombs in 2011 while doing a preliminary excavation of the area prior to the start of a big industrial building project. This year, Lefranc and his colleagues went back to do a more in-depth excavation.

They found that the tombs were well preserved by the limestone rock in which they were buried. One of the burials contained 20 tombs of men, women and children. The tombs, which date to between 4900 B.C. and 4750 B.C., also contained a few stone vases and tools, along with ornaments such as mother-of-pearl elbow bracelets and collars. The small group may have been a family from a Neolithic farming and animal-herding culture that lived in long houses and buried their dead in cemeteries, Lefranc said.

“The corpses are lying on their backs, with outstretched legs and heads turned westwards,” Lefranc said.

In the second burial, which was in a separate area, they found 18 tombs from either the late Roman period or the early Dark Ages, about 1,650 years ago. One of the tombs held a woman, likely an aristocrat, who had a deformed, flattened forehead.

“The deformation of the skull with the help of bandages (narrow strips of cloth) and small boards is a practice coming from central Asia,” Lefranc states. “It was popularized by the Huns and adopted by many German people.”

In those times, the deformed, alienlike skull, which was acquired after a procedure individuals had to undergo from the time they were infants,  was a privilege reserved for the aristocracy. “In France, Germany and eastern Europe, these deformed skulls appear in tombs rich in objects,” Lefranc said.

The wealthy lady’s tomb also contained gold pins, belts known as chatelaines, pearls, a comb made of a stag antler, and a bronze mirror that likely came from the Caucasus region or central Asia, he said.

The team speculates that the 1,650-year-old graves held mercenary soldiers from the East and their families, who were employed by the Roman Army during the waning days of the Roman empire.