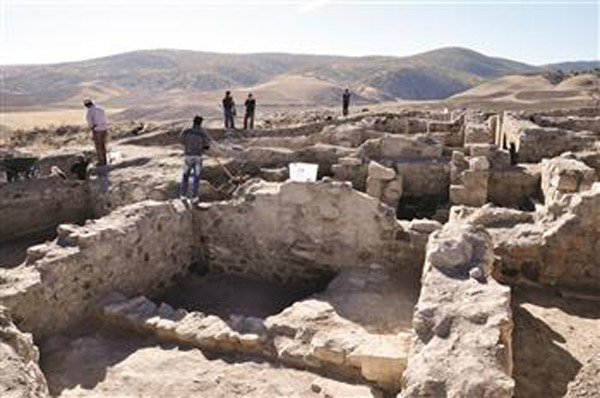 A bath which was later converted to a church was revealed

Kırşehir Museum, Director Adnan Güçlü said that excavations started last year in April, adding that they would continue the excavations for two more months this year.

Speaking about how the ancient city was unearthed, Güçlü said, that with the notification of law-enforcement officers and the village headman Eyüb Baran, the authorities came to the village and made examinations. Τhey entered the trench opened by treasure hunters and obtained information about the size of the site. Then they discovered that this place was a significant settlement, where a bath from the Roman era was preserved. “The furnace of the bath was the first place we examined. It was still strong”, he says.

These works took six months and during this process the team unearthed an 800-square-meter area, a big part of the structure.

Güçlü said that following the excavations, the lost Roman city, which is estimated to date back to the 2nd century B.C., was registered as a first degree archaeological site. He said that they also thought that the bath had been turned into a church.

“Those who donated the church were buried underground it. We found 21 male graves in this place and worked there, too. In Orthodox Christianity, there was a tradition that the men, who donate to a church, were buried there,” he said.

Güçlü said that works had still been continuing and it was not possible to excavate and unearth the complex structures within a short time. “It will take too much to reveal the whole ancient city,” he said.

The headman of Büyük Teflek village, Baran, said that they notified the commandership, district governorate and he Kırşehir Museum Directorate about the illegal excavations. “Museum officials came to the village and launched this area as an archaeological site,” he said, adding that they asked to open up the area to tourism.

He noted that excavations also provided employment for villagers. “This year 17 people from the village are working in the excavations.”