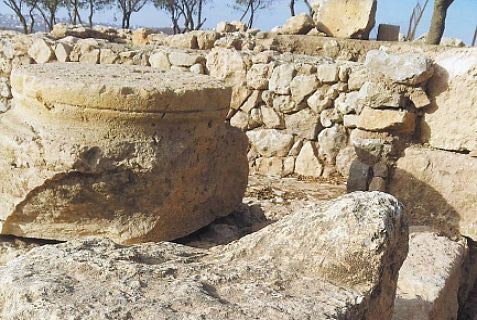 Indicated by a sacrificial stone from the Iron Age.

Shiloh, in Samaria, was the site of the first Tabernacle in Israel. Archaeologists now have found evidence that after Shilo was destroyed and Jews returned, they sacrificed even during the First Temple period.

A discovery at the ancient site of Shiloh (near Samaria), home of the Tabernacle, provides the first–ever evidence that it continued to be a religious center after it was destroyed by the Philistines. The altar is thought to have been used to offer sacrifices even after the First Temple was built in Jerusalem.

The stone from the Iron Age, coinciding with the period of the first kings of Israel, was found in a wall built later in the Byzantine period. Archaeologists think that Byzantines took the stone altar from its original site, which might have been in the same location as the Tabernacle.

There are two conflicting theories on its location, one stating it is on the northern side of ancient Shiloh and the other placing it on the southern side. According to Avital Faleh, administrator of the Tel Shiloh site, the wall was on the southern side and that it is more reasonable that the Byzantines carried the altar from nearby rather than several hundred yards, which would be the case if the Tabernacle were located on the northern side. The stone was measured at two feet by two feet and almost 16 inches high.

Other altars used for sacrificial worship during the First Temple era have been discovered in Be’er Sheva and near Arad in the south and in Tel Dan and near Shiloh in the north. Faleh explained that the stone altar is almost identical with others that have been discovered. The revelation on Tuesday of the discovery at Shiloh is the first evidence of post-Tabernacle sacrificial worship at the same site where the Bible states the first Tabernacle was erected after the Jews entered Israel following the Exodus from Egypt and the 40 years of living in the Sinai. Joshua 18:1 states, “The whole congregation of the children of Israel assembled together at Shiloh and erected there the Tent of Assembly, and the land was conquered before them.”

The Tabernacle remained at Shiloh for 369 years, according to the Talmud. The Philistines went to war against the Jews, destroyed the city, and captured the Holy Ark. The Tabernacle probably had been removed before the end of the war but was not used when sacrificial offerings were later offered at two other places, Nov and Gideon, until King Solomon built the First Temple. However, it took years before Jewish communities, especially Shiloh that was the home of the first sacrifices Israel, adjusted to the cultural and religious change.

In July, archaeologists said they believed they discovered the remains of the Biblical tabernacle site, after finding holes carved into the rock and which may have been used to hold beams for the Tabernacle. The Jewish Press reported here in January, that the discovery of an uncovered broken clay pitcher, embedded in a layer of reddish ashes, is from the time of the devastation of Shiloh, offering detailed evidence of the destruction. Shiloh was the most significant religious center for Israel before the Philistines destroyed it. The Jewish people offered mandatory sacrifices, and it was there that lots were cast for tribal areas and the cities of the Levites.

Deuteronomy 12:4-7, states, “You should not do any [act of sacrificial worship] to God, your God, other than at the site which God, your God will choose, to place His Name there, from amongst all your tribes. You should seek out His dwelling [place in the Tabernacle at Shiloh] and come there. You should bring there your burnt offerings, and your [obligatory peace] offerings, your tithes, [first fruits] lifted from your hand [by the priests]—your vows, your pledges, and the firstborn of your cattle and of your sheep [which are to be given to the priests]. [It is] there that you should eat [your sacrifices] before God your God. Then you and your households will rejoice in all the work of your hands. [You should bring offerings according to the means with] which God, your God, blesses you.”