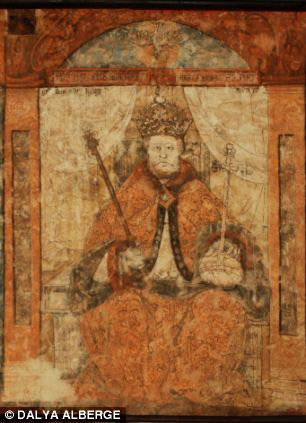 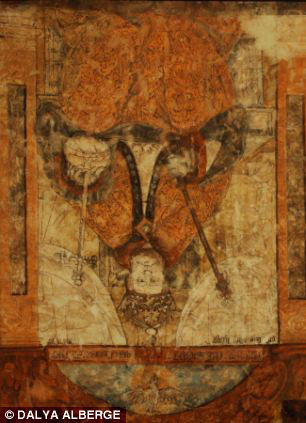 16th c. Henry VIII mural showing the Devil if viewed upside down has been revealed in Milverton

When British couple Angie and Rhodri Powell discovered a concealed, almost lifesize mural of Henry VIII while redecorating their 16th-century Milverton (Somerset) home a couple of years ago, they could not have been more excited, particularly when an expert spoke of its historical importance. When the portrait of Henry on his throne is viewed upside-down his features transform into the devil, with horns and goats’ eyes. The devil appears too when the mural is viewed through a glass.

The couple discovered the mural’s hidden message by chance when a postcard of the mural -which they had printed- had fallen on the floor upside-down – revealing the portrait’s sinister side. As they peered more closely, they realised how skilfully the dangerous image had been concealed. The king’s narrow shoulders become the devil’s pointed chin and oddly-shaped sleeve-cuffs were satanic eye-sockets. The painting is unsigned.

Dating from around 1530-1540, the six-foot-high and 20-foot-wide mural is in the couple’s drawing-room, the former Great Hall of the summer residence of 16th-century archdeacons of Taunton, including Thomas Cranmer, Henry’s loyal right-hand man and fierce advocate of monarchical absolutism and Protestantism.

While Henry’s portrait would have been an expression of loyalty, the hidden message suggests it was commissioned by someone with quite another view of a monarch who established himself as head of the Church in England in place of the Pope. Dr Kathryn Davies, a wall paintings specialist with English Heritage who is researching the mural, said: ‘It does look quite evil… Hold a glass up to it, it’s bizarre. You get quite an eerie picture.’

Professor Diarmaid MacCulloch, a specialist in the history of the church at Oxford University and Cranmer biographer, said that there was tremendous interest in optical illusion at the time, as shown by the distorted perspectives in Holbein’s famous painting of The Ambassadors and William Scrots’s portrait of Edward VI. “So there’s no reason why it shouldn’t be true,” he said.

He noted that one of the then archdeacons felt ‘very equivocally’ about Henry VIII’s Reformation: ‘It’s just possible that, for a private joke, he put it in because you could only see it through an optic. I imagine that, in the privacy of his own dining-room… it could be enjoyable.’

Conservator Ann Ballantyne, who is working on the mural, noted that it was painted at a time when the king was behaving ‘excruciatingly badly’. But as the old proverb goes: ‘The devil is not so black as he is painted.’