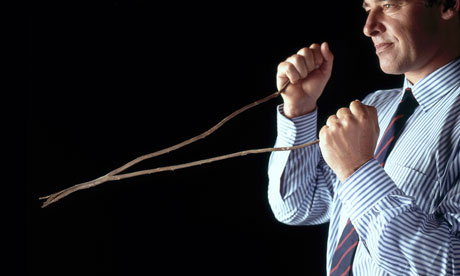 Mention the word dowsing and most people will think of a chap in muddy wellies trudging around a farm with a stick, looking for a good place to sink a borehole, or a fey type in a tie-dye T-shirt wafting about looking for mystical ley lines.

For centuries there have been believers in dowsing, a form of divination traditionally used to locate groundwater sources, and argument rages in the archaeological community about whether dowsers, armed with no more than a bit of bent copper wire and the power of faith, can also locate long-vanished Roman roads, Bronze Age barrows or prehistoric rock carvings.

However, even believers in the muddy wellies type of dowsing often have grave doubts about map dowsers, who claim to be able to locate such features just by holding a pendulum over a Google Earth satellite view taken from miles above a site. The debate has rumbled on through many archaeology forums, with believers and sceptics equally passionately engaged.

A website dedicated to prehistoric archaeology called the Megalithic Portal is now launching a competition to try and resolve the question, with would-be psychics and scoffers invited to join a hunt for archaeological remains from the comfort of their own armchairs.

Andy Burnham, founder of the website, says dowsing has consistently sparked “more discussion and discord” than any other subject on the site. “We always end up with the same stalemate. Dowsers claim they can find anything and non-dowsers doubt that because there is no documented proof.”

While dowsing often involves scrambling through nettles, bogs or up brambly slopes, Burnham’s competition is a kind of prehistoric spot the ball, requiring nothing more arduous than printing out his maps. He has removed all identifying features, but the maps do show real places, and there are real objects concealed in them: a newly identified piece of rock art, not yet listed on any database, and a buried quartz boulder near an ancient site.

Megalithic Portal recently reported the possible discovery of a stone circle in Somerset, where archaeologists used scientific geophysical techniques that suggest there are buried stones, but admit their research was sparked by a dowser’s efforts. Their claimed circle and his are close but not in exactly the same place.

Hobby dowsers frequently assemble small armouries of expensive kit, including copper or crystal pendulums and specially made copper dowsing rods, but the traditional tool was a forked hazel twig, and results have been reported with a plumb bob or bent coat hangers.

Burnham invites both believers and agnostics to enter the competition, either by dowsing using their equipment of choice, or by pure guesswork, and to rate their own level of scepticism so the results can be graded.

He is offering prizes of 2012 calendars with alluring views of prehistoric sites – which believers could then presumably dowse in the hope of finding more hidden treasures.

For details of how to enter the competition go to The Megalithic Portal website. The deadline for entries is the end of Sunday 20 November 2011.