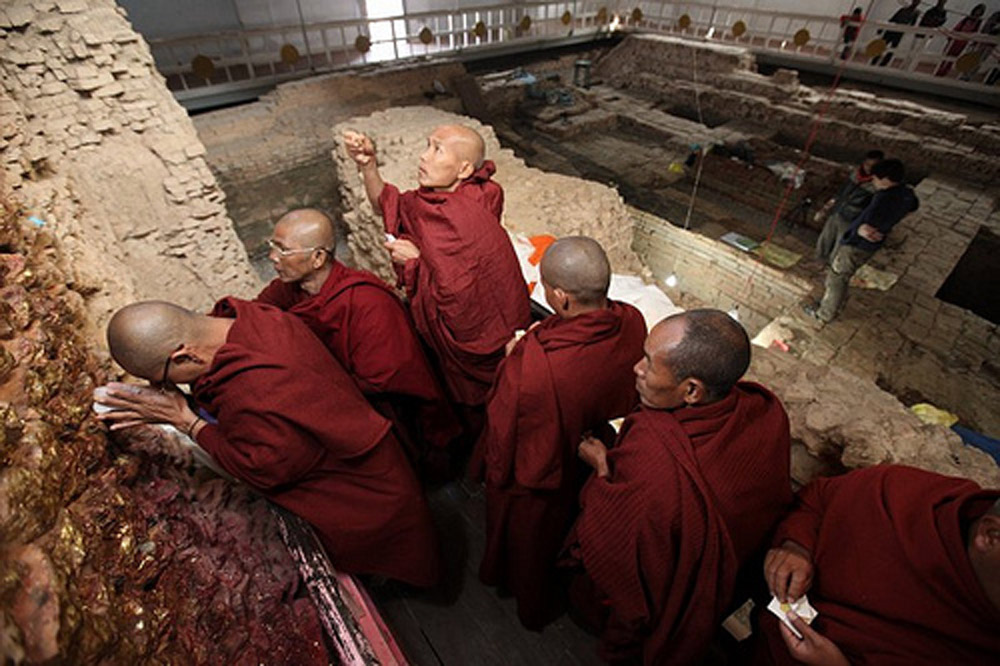 Finds point to the 6th century BC

Scientists excavating within the UNESCO World Heritage site of the Maya Devi Temple in Lumbini, Nepal, have unearthed a timber structure that they date to the 6th c. BC. It is situated within and underlies a temple that is considered sacred to many as the birthplace of Siddhārtha Gautama, or Buddha.

Working amidst meditating monks, visiting pilgrims and nuns, the international team of archaeologists, led by Coningham along with Kosh Prasad Acharya of the Pashupati Area Development Trust in Nepal, discovered the timber structure remains while excavating under an overlying series of successive brick temples.

To determine the dating of the timber structure, including a previously unknown first brick structure superimposed above it, charcoal and sand grain samples removed from the relevant layers of the early timber structure were tested using radiocarbon and optically stimulated luminescence techniques. Interestingly, geoarchaeological research also revealed evidence of ancient tree roots within the timber structure’s central space. According to Buddhist tradition, Queen Maya Devi, the mother of Buddha, gave birth to him while grasping a branch of a tree -and the tree rooots can be associated with that tradition. Coningham and his colleagues suggest that the open central space from which the charcoal and sand samples were removed was large enough to accommodate the sacred tree. Thus, concludes Coningham, “we have very clear evidence that this [timber] shrine was focused around the tree.” The later brick temples built over the timber structure, which was built around the open central space, were also arranged around this central space. Moreover, the results of their investigation indicated that the central space had “never been covered by a roof,” suggesting the significance of a space that clearly required special or unique treatment.

The Life of Buddha

Until now, there has been no archaeological evidence supporting a date any earlier than the 3rd c. BC for Buddha’s life. Some historians have suggested the death of Buddha took place sometime in the late 4th century or early 3rd century BC, although there are a number of traditions with varying dates.

“Very little is known about the life of the Buddha, except through textual sources and oral tradition. We thought ‘why not go back to archaeology to try to answer some of the questions about his birth?’ Now, for the first time, we have an archaeological sequence at Lumbini that shows a building there as early as the 6th century B.C.”, says Conigham.

Long lost and hidden by jungle overgrowth, ancient Lumbini was rediscovered in 1896 and, because of an inscription on a sandstone pillar discovered at the site, was identified as the birthplace of the Buddha. The inscription bears record of a historic visit by 3rd century India’s Emperor Ashoka to the site of the Buddha’s birth. The inscription also included the site’s name as Lumbini. Under Ashoka’s patronage, Buddhism spread from present-day Afghanistan across India, up to Bangladesh.

Other key historic sites related to Buddhism are Bodh Gaya, where Gautama became the Buddha; Sarnath, where he began his preaching; and Kusinagara, where he died.