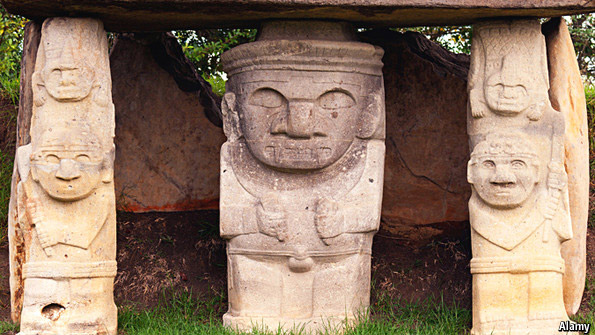 An Exhibition of Mistrust

A village's war over a museum regarding cultural heritage

20 statues which have been key to the site of San Agustín, Colombia, will be absent from   an exhibition commemorating 100 years since its discovery due to the site’s local inhabitants’ refusal to let them travel to the exhibitions’ venue in the capital, Bogotá.

The inhabitants have been protested agains the statues’ move ever since the announcement that the excibition organizers were willing to use them in the commemorative event held in Colombia’s National Museum. The reason for protesting? Strong collective memmory and an alternative sense of what the statues represent, at least in comparizon to the sense shared by archaeologists and heritage specialists.

The story goes as follows: The site was first located -from the European point of view- by Konrad Preuss, a German anthropologist who led the first European excavations there, shipped 35 statues that he found to a museum in Berlin, where they remain since 1919. Now, that Colombia is called to commemorate Preuss’ deeds, the locals worry that the objects that would go to Bogotá would not return to San Agustín, or would be swapped for replicas. Furthermore, they claim that moving them would upset their spiritual energy.

Aware of the sensitivity of removing the statues even temporarily, anthropologists from the Colombian Institute of Anthropology and History held town meetings to explain the importance of allowing them to be seen by a wider public. But they were never heard.  As the date for the exhibition neared, the locals began making demands, such as asking for a new drinking-water system for the town in exchange for letting the statues go. No deal was agreed. On the day last month when the sculptures, carefully wrapped and crated, were to travel to Bogotá, locals backed by outside agitators blockaded the road and prevented workers from loading the trucks. The anthropologists backed off.

In response, the Museum has adopted its own form of protest. As reported by The Economist, the exhibition opened, minus statues, on November 28th. “We wanted the public in Bogotá to perceive the absence,” says María Victoria De Robayo, director of the National Museum. So light is projected where the statues would have been; guides use a virtual-reality program and tablet computers to show visitors a 3D image of what was meant to be there. This is unlikely to draw the crowds, but the affair has sparked a debate about Colombia’s cultural heritage.

The museum has taken a robust position: the opening display invites visitors to consider “the emptiness and silence that emerge when a few people claim exclusive right over our heritage, trampling the cultural liberties of all Colombians.”. But is this the case? Or when it comes for a living part of culture, local is stronger than global?