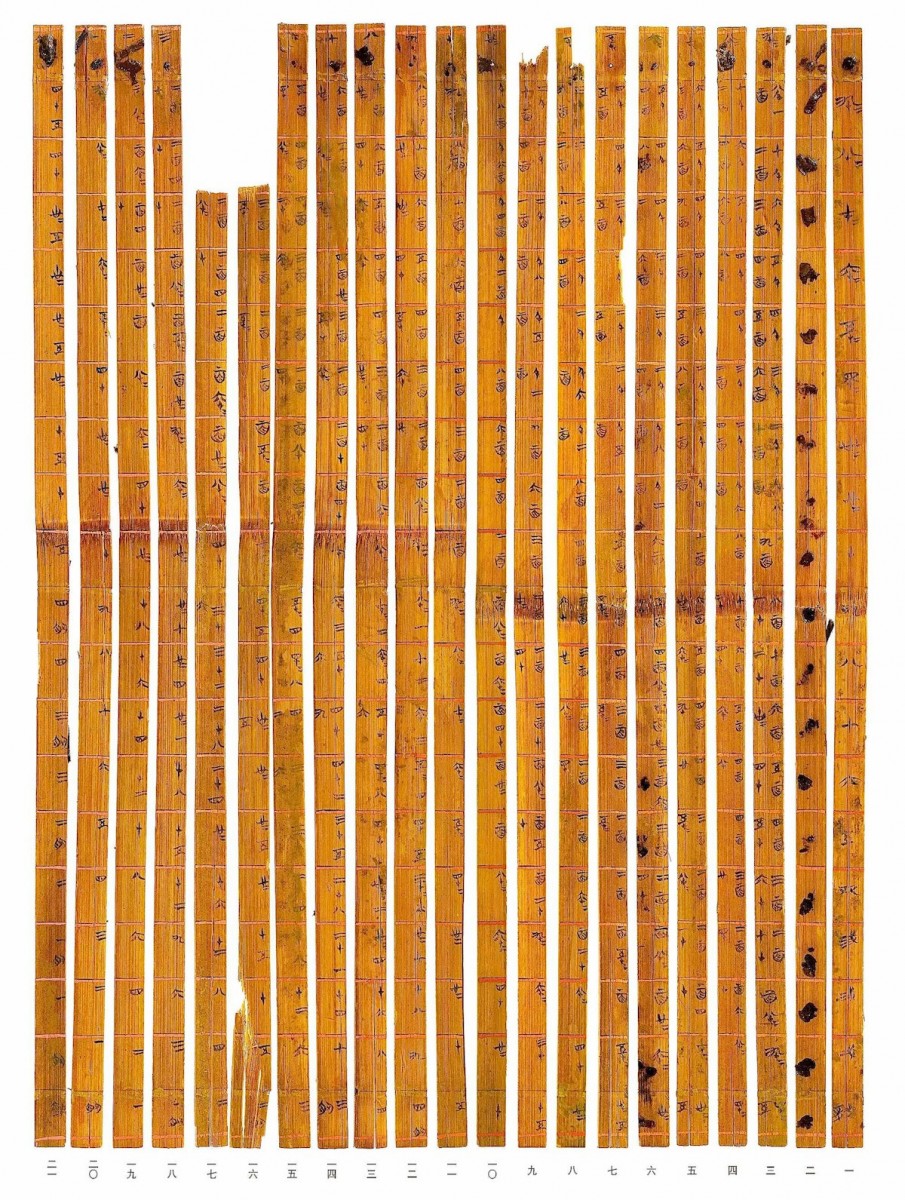 A matrix representing what is said to be the world’s older example of a multiplication table has been discovered by Chinese scientists after they pieced together a series of 21 inscribed bamboo strips kept at Tsinghua University in Beijing.

Dating from around 305 BC, the bamboo strips belong to a group of 2,500 similar strips, inscribed with Chinese calligraphy, presumably coming from a looted tomb. The group was primarily purchased in a Hong Kong market by a collector, who donated it to the University back in 2009. Reserachers managed to rearrange them in groups and attach them back together, so that they can reconstruct writing surfaces in the form of scrolls, in a way the strips had been used in antiquity. After these arrangements, it was revealed thatthe bamboo pieces constituted 65 ancient texts!

“The strips were all mixed up because the strings that used to tie each manuscript together to form a scroll had long decayed,” says Li Junming, a historian and palaeographer at Tsinghua. Some pieces were broken, others missing, he adds: to decipher the texts was “like putting together a jigsaw puzzle”.

But “21 bamboo strips stand out from the rest as they contain only numbers, written in the style of ancient Chinese”, says Feng Lisheng, a historian of mathematics at Tsinghua. Arranging these strips properly, scholars managed to reconstruct a matrix structure.The top row and the rightmost column contain, arranged from right to left and from top to bottom respectively, the same 19 numbers: 0.5; the integers from 1 to 9; and multiples of 10 from 10 to 90.

Feng adds: “We can even use the matrix to do divisions and square roots. But we can’t be sure that such complicated tasks were performed at the time […]. Such an elaborate multiplication matrix is absolutely unique in Chinese history”.

“It’s the earliest artefact of a decimal multiplication table in the world […]. (which) certainly shows that a highly sophisticated arithmetic had been established for both theoretical and commercial purposes by the Warring States period in ancient China”, says math historian Joseph Dauben.

It is also important to add that the charts might represent a case of lost knowledge. They date just before Qin Shi Huang, China’s first emperor, who famously ordered book burnings and banned private libraries in an attempt to reshape the country’s intellectual tradition.