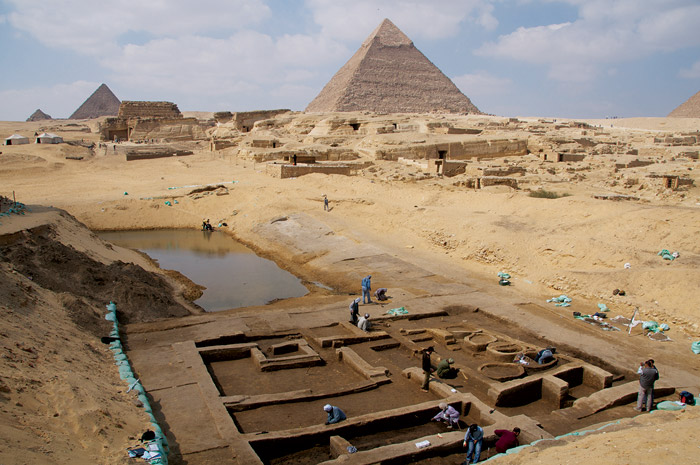 More Than A Necropolis: New Finds from Giza

How soldiers and priests lived in ancient Giza

A basin that was likely part of an ancient harbour, a building complex connected to ancient royal cult and other new finds shed more light to the character of the Giza Plateau.

According to Live Science, archaeologists working at the Giza Pyramids have revealed a number of more or less impressive architectural elements which help us to define yet unknown elements of what Giza Plateau might have represented during Antiquity.

Among them is a basin, which was found full of groundwater and is located about 0.6 miles (1 km) from the nearest channel of the Nile River. According to Mark Lehner, the director of Ancient Egypt Research Associates, the basin may be an extension of a harbor or waterfrontthat might had kept Giza supplied with goods, including wood from the eastern Mediterranean and granite from Aswan on Egypt’s southern border.

A corridor running to the north of the basin connects the harbor with a town to the west and a newly excavated building-complex to the east, just 400 meters (1,312 feet) south of the Sphinx. Archaeologists uncovered a house and nearby mound containing the hind limbs of young cattle alongside the seals of high-ranking officials and leopard teeth (but no leopard).

The house, containing at least 21 rooms, dates mainly to the time when the pyramid of Menkaure (the last of the Giza Pyramids) was being built. The officials’ administrative titles ( “the scribe of the royal box” and “the scribe of the royal school,”) connected with the leopard teeth (likely coming from the head of leopard skins -a usual attire for a certain category of priests connected to royal cult) and the bones sugges that the complex was occupied by royal cult priests. Dubbed “the silo-building complex”, the building included grain silos and bakeries. This royal cult performance was probably in the name of pharaoh Khafre, whose name survives on a seal found on the site.

The archaeologists have also been excavating a series of long, 23-feet high (7 meters), structures now called the “galleries”,  likely used to hold troops performing guard duties for important people while at Giza. The finding of charcoal remains of cedar (a wood from abroad) in the interior,  suggests that soldier inhabitants of the galleries can be linked to the eastern Mediterranean.