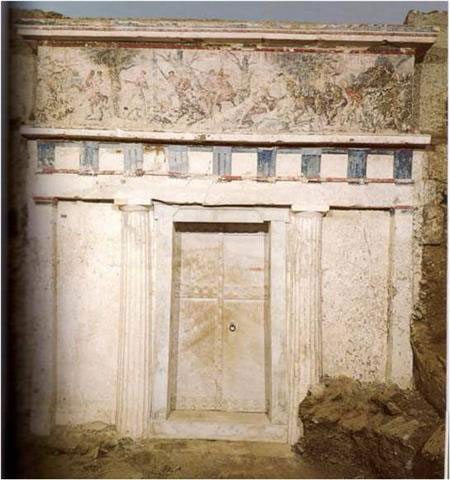 The Tomb of Philip in Vergina: Which Pihlip?

On February 12, 2014, Olga Palagia (Professor of Classical Archaeology, National & Kapodistrian University of Athens) will give a lecture entitled “The Tomb of Philip in Vergina: Which Philip?” at the Swedish Institute.

As Professor Palagia explains in the abstract of her lecture: “The village of Vergina in Macedonia became internationally famous in 1977, when the Greek archaeologist Manolis Andronikos excavated the Great Tumulus which covered four royal Macedonian tombs (Tombs I-IV) containing fabulous wall-paintings and incredible treasures in gold and silver.He immediately announced that Tomb II, which contained the most astonishing treasures, belonged to Philip II, King of Macedonia and father of Alexander the Great. He based his conclusion on the assumption that Philip II was a great king, his tomb must therefore have contained the richest grave goods. This view was quickly challenged, and Tomb II was attributed to Philip II’s son, Philip III, who became king after the death of Alexander the Great. This other view is based on the argument that the treasures of the Tomb and the lion hunt painted on its façade, suggest that the burial postdates the conquest of Persia by Alexander the Great.”