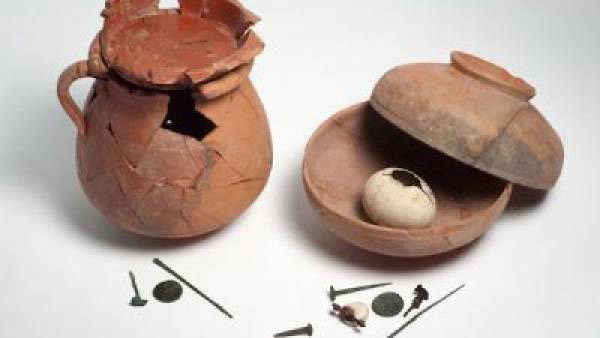 Looking at the origins and meaning of ritual deposits from Sardis

Archaeologists digging at Sardis, capital of the ancient Kingdom of Lydia and home to the legendary King Croesus have found themselves in front of a 2,000-year-old enigma after the finding of two ritual deposits, each one containing a pot with lid, a coin, a group of metal implemets and an egg!

The depisits, dating from the Roman era of Sardis, about AD 70 or 80 had some kind of of ritualistic nature. The discovery took place last summer, by the archaeological team of the University of Wisconsin-Madison (US), which digs Sardis for decades, under the supervision of Art History professor Nicholas Cahill.

The impressive find was located in the filling covering the space between two floors of different date, in a Roman residence.  It formed part of an assemblage of mostly unbroken pottery. “It looked like we were reaching a more intact deposit instead of fill,” explains site excavator Will Bruce who uncovered the find.

As stated in the find’s presentation through the University’s webpage, within that assemblage, Bruce began to carefully uncover an inverted bowl, which turned out to be sitting on top of another bowl. The bowls, still filled with dirt, were carefully removed and immediately turned over to conservators who cleaned and dissembled them to find a set of small pointed instruments, a coin with a lion and portrait of Nero, and the intact egg.

“The ritual offerings were dug into pits in the floor, after the room was constructed. We know they were renovating the room periodically, because in another part of the space there was a dump of painted wall plaster buried under the floor, presumably in a renovation.”, says project director Prof. Cahill.

It is a fact that such groups of bowls alongside eggs and coins are well known to archaeologists digging Sardis, and, as it happens with the newly found ones, they are interpreted as votive deposits buried under floors or within walls according to a fairly common practice. However, scholars have not managed to define crucial details regarding the ritual performance these groups are related with. Roman literary sources suggest eggs were used in particular rituals, while burying votive artefacts under a floor are regarded as part of a ritual to protect the house. “The meaning of these deposits is still quite open to interpretation,” notes Prof. Cahill.

Still, the really unique find in the framework of this discovery is the coin accompanying the group. While the front is engraved with a portrait of Nero, the original reverse was hammered flat and the image of a lion-an emblem of local goddess Cybele- engraved in its place. According to the report on the find, expert numismatists have never seen anything like it, hinting that Sardis still remains a rich and highly unexplored site, hiding many secrets for future archaeologists to reveal.