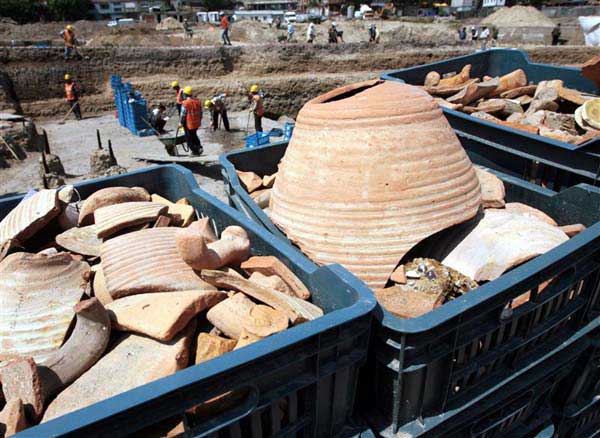 ANKARA. Turkey’s ability to manage its vast cultural heritage may be at crisis point, experts warn. The recent decision to transfer the excavation permits from three well-known classical sites from non-Turkish to Turkish universities—a practice almost unheard of in the protocol-laden world of archaeology—is a cracking of the whip over foreign scholars regarded as not working fast enough to transform the country’s extensive array of antiquities into tourist attractions.

“The threats are direct and indirect and the atmosphere is just that much more difficult,” says Stephen Mitchell, the honorary secretary of the British Institute in Ankara. “Getting a permit is now a process of negotiation and academic concerns are not always the first priority,” he says.

A recent broadside published by one of the country’s most eminent archaeologists describes policies more concerned with policing scholarship than confronting the wholesale erosion of Turkey’s vast heritage. The 235-page critique, which translates as “Archaeological Excavation: Scholarly Endeavour or Shovelling Earth?”, will find a sympathetic audience among non-Turkish archaeologists who find themselves increasingly stranded in a maze of regulation and museum politics. The author, Mehmet Ozdogan, professor emeritus in the pre-history department of Istanbul University, describes the system for granting and renewing research permits as having degenerated into an unseemly process of “favouritism, threats and personal jealousies”.

At stake is the material record of one and a half million years scattered in every corner of a country three times the size of the UK. There are more than 200 active projects (half of them surveys rather than full-blooded excavations). On one hand is the little visited central Anatolian site of Boncuklu, 1,000 years older than nearby Catalhöyük and a “missing link” between hunter-gatherers and sedentary peoples. By contrast, the Österreichisches Archäologisches Institut received a permit to work on the classical city of Ephesus in 1898, which now resembles a Cecil B. DeMille film set and attracts some two million tourists every year.

The variety and appeal of Turkey’s past, as much as its sandy beaches, is a pillar of a tourism industry valued at more than $21bn this year. If anything, that figure is set to rise as Turkey seeks to provide an alternative for visitors avoiding Egypt and Tunisia.

In recent years the Turkish government has made developing its tourist industry a top priority and it has become one of the most important sectors of the Turkish economy. According to a report compiled in March by the market research company RNCOS, the country has surpassed China and Russia to become the fastest growing tourist destination. The ministry of culture and tourism has set a target of 30 million visitors for 2011. The country is also investing in religious or faith tourism. The ministry is working to restore Muslim, Jewish and Christian sites with the aim of attracting more than three million religious tourists by 2012—1.7 million more than in 2010.

Culture and tourism share the same ministry in Turkey and it is not always clear which is the master and which the servant. Directors of digs are being asked to extend their work beyond the two-month university summer break and to devote a greater portion of their resources to restoration—particularly now the revenue from many sites has been turned over for collection to the Association of Turkish Travel Agencies (Tursab).

While most archaeologists understand, at least in principle, the need for public outreach, “cultural site management is a field in its own right and not always what academics do best”, says Nora Seni, the head of the Istanbul-based Institut Français d’Etudes Anatoliennes. The French academy is smarting after having permits cancelled for two major classical sites, Letoon and Xanthos.

There are now close to 30 archaeology departments in Turkish universities, many of them in new private “red bricks”, which have opened in the past ten years. This has produced a better trained generation of Turkish scholars as well as an academic cadre eager to advance their careers.

The once mighty Deutsches Archäologisches Institut (DAI), responsible for some of the most important sites in Turkey, has in particular seen its sails trimmed. In 2010, Ankara refused to renew any of its permissions until the very last minute as part of a campaign to force the return of a Hittite sphinx that once guarded the gate of Hattusa and was shipped for repairs to Berlin in the 1930s (The Art Newspaper, July/August). It has now been returned. However, the institute, along with Freiburg University, was stripped of its permit for Aizanoi, famous for its Temple of Zeus, where work had been grinding to a halt.

Despite this painfully public slap on the wrist, most believe that German archaeology was secretly grateful for this forced economy on a site whose results were no longer cutting edge. “Modern archaeology is about context and the discovery of transitions, not the recovery of beautiful objects,” says Elif Denel, the Ankara director of the American Research Institute in Turkey. “In some cases you can answer big questions with a single season’s survey and without lifting a spade,” says Felix Pirson, the director of the DAI in Istanbul.

The danger is that energies will be diverted into producing Disney-style attractions. Yet tourism may be the most benign of the economic pressures facing Turkish archaeology.

Always on the horizon is urbanisation and an economy developing at a prodigious rate. Allianoi, a Roman spa in the west of Turkey, and the garrison town of Zeugma in the east are already submerged under dammed rivers. The medieval Arab city of Hasankeyf faces becoming a similar watery grave.

Many of the country’s most important projects race against the clock to rescue major sites while an army of bulldozers waits with engines running. Work on an interchange station for the Istanbul metro system uncovered an old Byzantine harbour and 32 buried ships: commuters are still waiting as the emergency dig finishes its seventh year. There are clear signs that government patience has finally worn thin. New legislation removes responsibility from the ministry of culture and tourism. Instead protection is now the responsibility of the ministry for the environment, which has a dismal record of standing up against wholesale development.

Tayyip Erdogan, the Turkish prime minister, in a speech in February expressed his annoyance with “bits of old potsherds” that were getting in the way of ¬major infrastructure projects. “People have to come first,” Erdogan said, while announcing the creation of what is effectively a new city on Istanbul’s remaining green belt along the Black Sea, a new Bosphorus bridge, and a Panama-style canal that would cut the Thracian peninsula in two. While time may be its subject, it may not be a luxury Turkish archaeology enjoys.