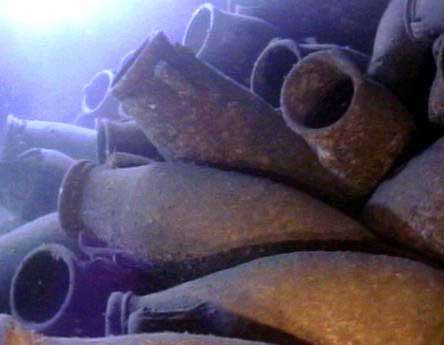 Cargoes of amphorae and marble intact

Two ancient Roman shipwrecks, complete with their cargo, have been discovered by Italian archaeologists off the coast of Turkey near the the ancient Roman city of Elaiussa Sebaste.

The ships, one dating from the Roman Imperial period and the other from about the sixth century AD, have been found with cargoes of amphorae and marble, say researchers from the Italian Archaeological Mission of Rome’s University La Sapienza.

Both ships were discovered near Elaiussa Sebaste, on the Aegean coast of Turkey near Mersin, according to a statement issued by the Italian embassy in Ankara.

Officials say the discoveries – led by Italian archaeologist Eugenia Equini Schneider – confirm the important role Elaiussa Sebaste played within the main sea routes between Syria, Egypt, and the Anatolian peninsula from the days of Augustus until the early Byzantine period. Elaiussa, meaning olive, was founded in the 2nd century BC on a tiny island attached to the mainland by a narrow isthmus in the Mediterranean Sea.

Schneider has been leading the excavations since 1995. Last month there were other finds (not underwater) at the site of Elaissua Sebaste. The most striking of them was an ancient Roman bath about 50 square meters.