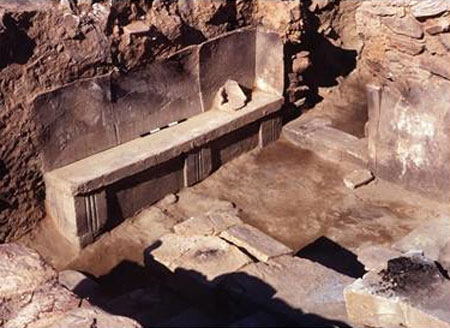 Special seminar on the occasion of the 10th anniversary of the Minoan Seminar series will be held on Thursday, March 13th, 2014 at 6.30 p.m., at the Archaeological Society (Panepistimiou 22, Athens).

The event will be chaired by Efi Sapouna-Sakellaraki and addressed by Vasileios Petrakos, Erik Hallager and Maria Andreadaki-Vlazaki. A seminar will follow by  Gerald Cadogan titled “Myrtos-Pyrgos: Minoan monuments and memories by the Libyan Sea?” (The seminar will be given in english).

As written in the abstract of the lecture: “This paper summarises the progress of study for publication of the excavations at the long-lived Minoan settlement of Myrtos-Pyrgos on the south coast of Crete, beside the Libyan Sea to the west of Ierapetra. It will highlight several ways in which Pyrgos contributes to current discussions about the Cretan Bronze Age. Four themes recur during the now five periods identified of the prehistoric settlement: burial practices at a long-used house tomb sited on the edge of the settlement; defence, and destructions of the settlement with fire; provision and planning of buildings, including two central buildings, courtyards, and management of the water supply; regional affiliations (including the issue of the type of connection of Pyrgos with Malia in Protopalatial times) at a place whose allegiances appear to have changed several times over the centuries, probably because it has always been sited on a natural boundary (the Myrtos river valley).

“In the sequence of periods, we note:

“Pyrgos 0 (FN IV [or II] and EM I) — recently recognised as a period: very few sherds add a little to the pattern of new settlements in the area at this time.

“Pyrgos I (EM II) — EM IIA and IIB use of a settlement that would have been larger than Myrtos–Fournou Koryfi; destruction by fire.

“Pyrgos II (EM III/MM IA–MM IB and, probably, MM IIA) — construction of Tomb complex; possible construction of the Courtyard on top of the hill; ceramic links with both central (probably north-central) and east (including east-central) Crete.

“Pyrgos IV (LM I) — after a likely abandonment during MM III, resettlement includes construction of Country House with strong links with Knossos; final use of the Tomb; destruction by fire, apparently by human action.

“We may add: Pyrgos V (Hellenistic), which is relevant here for the construction of a likely frontier-shrine of Ierapytna to Hermes and Aphrodite over the ruins of the Country House.”