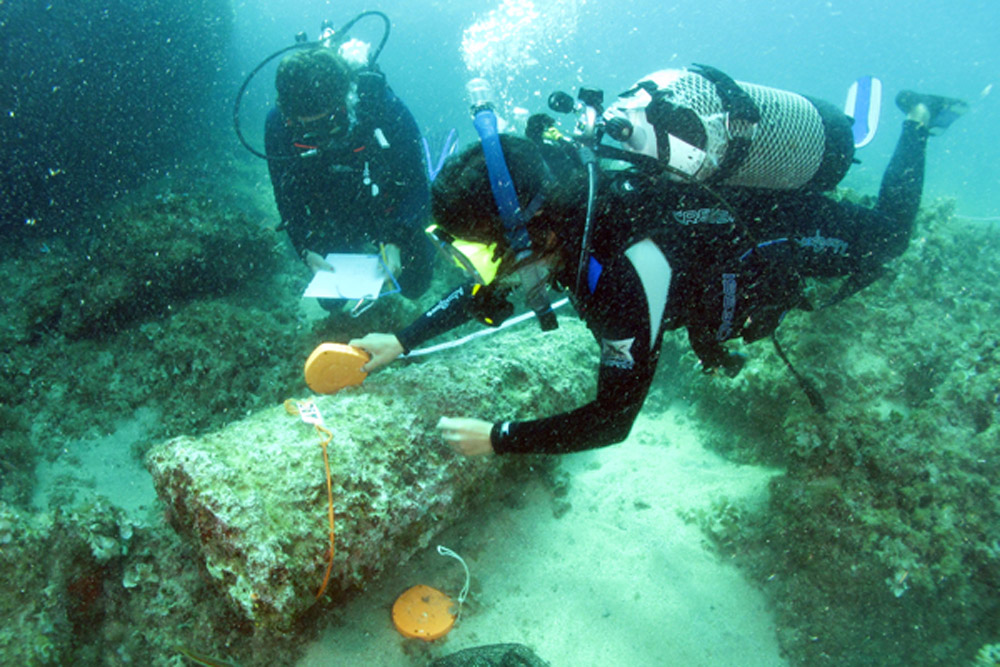 The Roman Empire In Depth

An assistant professor of classics, Leidwanger is a maritime archeologist. His research entails what it sounds like it would – exploring artifacts that lie beneath the sea.

A scholar with interests in the Roman and early Byzantine eras, Leidwanger has conducted thousands of dives – mostly to explore shipwrecks of the Eastern Mediterranean region. His students, too, don snorkels or scuba gear and work underwater.

“There is a lot of theoretical work on the maritime economy of the Roman Empire, but I am interested in the close details of sea travel and how archeological finds can shed light on the history of consumption and connectivity around the Mediterranean,” said Leidwanger.

The social networks established by sea travel, Leidwanger says, were the basis of commerce during the Roman Empire, and in the shipwrecks and harbors he is able to see evidence of “who was interacting with whom and how and when these objects were being transported and for what reason.”

Leidwanger’s aim is to bring together the theoretical models of ancient economics and socioeconomic connectivity with hard data from his underwater fieldwork.

“The Roman Empire was the most complex state structure at the time with a lot of movement of goods and people through the landscape,” Leidwanger said. “I am interested in how these structures and social networks change over the life of the Roman Empire.”

He is currently engaged in two projects, the Marzamemi Maritime Heritage Project in Sicily and the Burgaz Harbors Project in Turkey.

“Sicily was a nexus of communication and commerce between the eastern and western Roman Mediterranean. In the shipwrecks there, we are finding evidence of the changing patterns of commerce when the capital moved from Rome to Constantinople in the 4thcentury A.D.,” Leidwanger notes.

In Turkey, archeologists are currently excavating four shallow-water harbors to get a picture of what the harbor structures were like. In the 4th century B.C., during the late Classical period, Burgaz became a regional and international economic center for the export of agricultural goods.

“We are finding evidence of how these integral structures changed over time,” Leidwanger says.

Uncovering history in the Mare Nostrum

The location of Leidwanger’s current research is key to uncovering archeological data about the importance of the Mediterranean Sea for the Romans.

“The Mediterranean Sea has been described as an ‘inverted continent,’ a zone of human culture and relationships centered on the sea rather than land, a product of geography that led me to focus on the maritime,” Leidwanger said.

To undertake his research, Leidwanger maps and excavates marine sites to understand what was being transported and when.

At sites in Sicily or Turkey, where he travels each summer with Stanford students, Leidwanger excavates harbors and shipwrecks that often contain well-preserved artifacts that he can analyze in the lab.

“The great thing about shipwrecks is that I often find intact pottery jars, which are very helpful, as you can then determine their capacity, what they transported and how they were used.”

These artifacts, he says, often provide glances into their history.

“They sometimes have inscriptions on them, one scratched over another, so I can establish a life history of those objects, which can then quantifiably fit into a larger history on the movement of objects and the nature of consumption in maritime antiquity,” Leidwanger said.

“In Sicily, I have raised artifacts from half a mile off the coast of Marzamemi, where there are a dozen shipwrecks, including vessels carrying massive granite columns and prefabricated marble architectural elements, probably to be used in an early Byzantine church during the 6th century,” he said.

Leidwanger’s work is an international operation. In his two current projects in Sicily and Turkey, Leidwanger has collaborators from Canada, Italy, Turkey and Israel. Stanford students also play a fundamental role on the field trips.

“Our students get a lot of field experience in different parts of the world. This summer, I’ll be taking a number of undergraduates and graduates with me to both Turkey and Sicily. It is a cultural experience, and one in which the students’ input is vital,” Leidwanger said.

Megan Daniels, a graduate student in classics, works with Leidwanger on the site in Turkey, assisting with pottery analysis.

“We perform visual and scientific analyses on the ceramics to better understand local and long-distance trade routes and the long-term dynamics of the maritime economy. Working with the raw materials of trade to contribute to a broader picture of the ancient economy is very exciting,” Daniels said.

Technology plays a key role in the equipment- and cost-intensive world of marine archeology. Sonar and other remote sensing technologies help to find and contextualize sites, while innovative computer applications allow archaeologists to create 3-D maps of the seabed.

“It is important to choose the right tools for the right occasion, and you need to have the right research questions. What goods were moving, and why? How did this change over time? These are the questions that motivate me,” Leidwanger said.

Marissa Ferrante, an undergraduate majoring in archeology, traveled to Sicily as part of the team last summer.

According to Ferrante, who is currently creating a 3-D topographic map of the site and the seabed, “Excavating underwater sites and collecting data in the field has allowed me to relate classroom discussions of theories and archaeological best practices to real-world applications.”

Leidwanger and his team use technological tools to map the site and then set up a conservation lab to begin analysis.

“Underwater artifacts tend to soak up salt, so they need long-term treatment. Wood, pottery, stone and metal all need different treatment processes. At our colleagues’ lab in Turkey, for example, they are still conserving and mending pottery that was excavated in the 1980s and 1990s.”

After the artifacts are extracted and restored, they are often exhibited in museums and used to highlight heritage issues and establish marine preserves.

Leidwanger, who teaches a class on archeological ethics, is passionate about the process of sustainable archeology.

“Legal jurisdictions, particularly underwater, aren’t always well defined, and heritage and preservation therefore become key issues. The sovereignty over sites and excavated materials can be unclear and there are some opportunists around.”

Leidwanger makes an effort to situate his research within a broader dialogue on natural and cultural heritage practices. In Sicily, for example, he said he is “helping to implement state-of-the-art site management alongside local initiatives for environmentally sustainable tourism and economic development.”

For Leidwanger, archeology is more than just looking at artifacts and excavation sites:

“For me, it is about establishing and maintaining cultural heritage so that we can better understand history. It is about social networks and human relationships with objects and places, relationships that are as important today as they were in the past.”