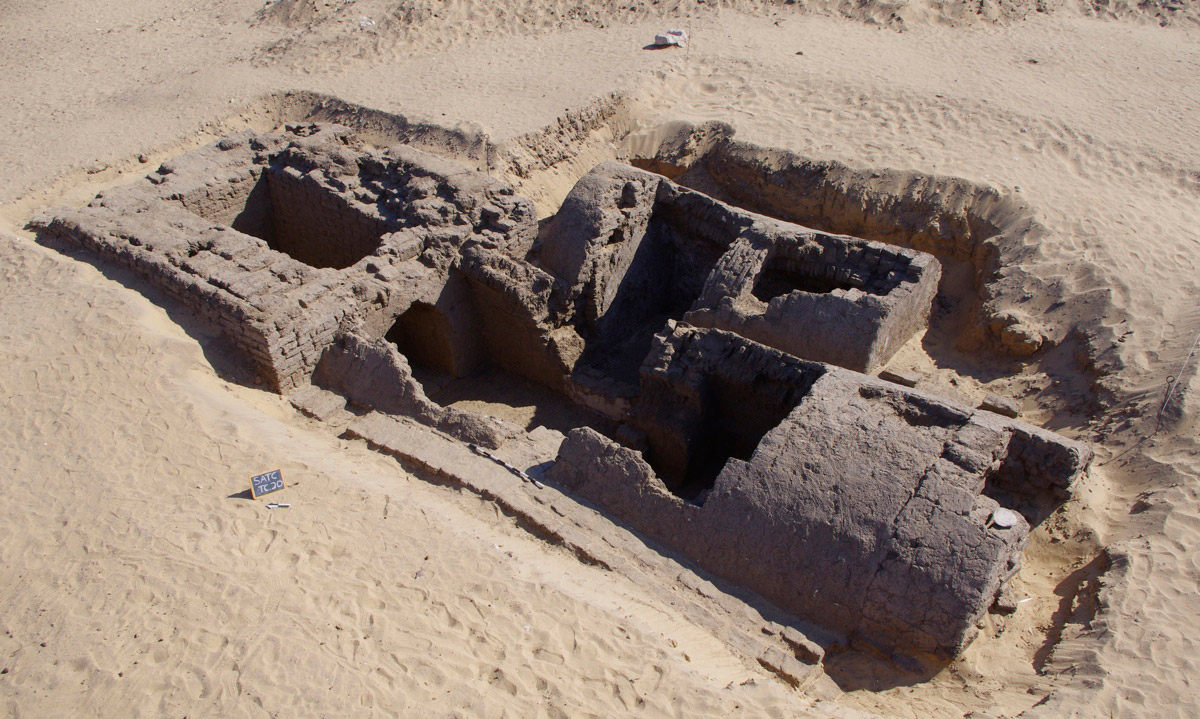 The tomb, with walls built of mud-bricks, dates back around 3,300 years. Its layout demostrates a series of chambers, most of which boast a vaulted ceiling, while its entrance would be topped by a pyramid ( of which only the walls of the tomb entranceway that would have formed its base survive) which would reach 7 m. in height. The tomb’s plan indicates that the whole set of chambers was to remain below ground, let alone the pyramid, which would be the complex’ only visible element.

A sandstone sarcophagus was found within the main vaulted burial chamber.  The sarcophagus has images of several Egyptian gods on it and hieroglyphic inscriptions recording spells from the Book of the Dead that helped one enter the afterlife. According to inscriptions, it was commissioned for a scribe named Horemheb.  A secondary burial chamber was found empty of a sarcophagus. However, it contained shabti figurines (destined to work on behalf of the deceased in the afterlife) inscribed for the “Overseer of the Stable, Ramessu.”

Although the sarcophagus itself was found empty, the tomb was not poor in human remains. Bones ascribed to three or four men, ten to twelve women and at least two children have been discovered -probably pointing to the deceased’ s family members. Is the discovery hinting that polygamy was practiced among non-royals? Or the tomb was used for multiple generations? Radiocarbon tests, which can provide a date range for the bones, may be done in the future to help solve the mystery.

The finds in relation to the two known tenants of the tomb, however, are much more interesting from the aspect of culture. According to Mr. Cahail, the family of the scribe Horemheb had military ties that allowed them to afford such an elaborate tomb. Also, the title of Ramessu, “Overseer of the Stable”, is a military one. Most importantly though, both men bear names of commoners who went to become Pharaoh. Horemheb, a top military official married to a noblewoman with ties to the Amarna royal family ( probably Nefertiti’s sister) succeeded Tutankhamun’s successor Ay. As he was childless, he passed his throne to his then vizier, (Pa)Ramessu, who succeeded hime creating a new Dynasty, the 19th.

But why the two tomb’s tenants (probably brothers) bear the names of these two Pharaohs, who were contemporary to them?”They could actually be emulating their names on these very powerful individuals that eventually became pharaoh, or they could have just been names that were common at the time,” Cahail said, hinting a less well documented aspect of Egyptian culture of the time. Still, even if Hopremheb and Ramessu had no connection with the Horemheb and the Ramessu, and even if the names were just common during that time, they were surely emulating the pharaohs regarding burials in style.

The findings from the tomb will be presented during this year’s ARCE meeting, to be held in Portland, Oregon (USA), from April 4-6.