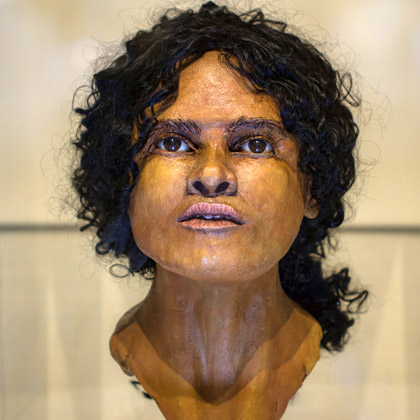 Research on Roman date skeleton points to an African lady

The skeleton of a woman presumably found in a Saxon cemetery in Eastbourne, Sussex, UK, and whose face had been recently reconstructed, has been revealed to belong to a lady of Sub-Saharan origins.

As happened with the rest of the human remains found during excavations in Eastbourne, the skeleton was kept in the basement of the city’s town hall, separated in two boxes,stamped with “English Heritage” label and each bearing the inscription “Beachy Head”.  There is next to no information on the exact dig that revealed the bones or the exact location she was discovered. Anthropologists engaged in a project to research on the human remains held in the town hall stumbled upon the boxes and investigated their content. The small skeleton they found inside was estimated to belong to a fairly young woman, sort of 5/1, 5ft high and missing her wisdom teeth.

The facial reconstruction was done by Caroline Wilkinson from Dundee University, one of Britain’s foremost reconstructors. It was Wilkinson who first spotted the woman actually had “foreign looks” by studying the skull -two more experts followed to confirm her. ‘You realise you’ve got a sub-Saharan African here?’, Wilkinson stated. The lady’s African origins came out in the features of her face.

Radiocarbon dating on the bones gave a firm Roman date – around 200 or 250 AD, while isotope analysis indicated she resided in South East England. It’s not without precedent to find Roman Africans in Britain, such as the famous African bangle lady in York. Still, she’s not North African, (part of the Roman Empire), but she came to Britain from beyond the Roman Empire, to the south, to spend the rest of her life there.

Being an exciting finding by itself, there is little more to be said as there are no records from the burial or its excavation.

“Looking through 19th century reports of skeletons being dug up in the area, there is one intriguing one from 1891 which talks about three skeletons being excavated from a Roman cemetery. It said it was on the west side of Beachy Head, in the village of East Dean. We think we’ve identified exactly where that excavation was.It mentions that one of the skeletons was found with a number of bangles on their arms. In Roman times that would mean a woman.It doesn’t say anything about the skeleton, it just says the bangles were kept by the museum. But that museum was then bombed by the Germans in the Second World War and the bangles were lost.”, says Heritage Officer Jo Seaman.

“If she is from there, which is possible, it could be the lady with the bangles, in which case she is probably of higher status and there’s gonna be an unknown Roman building nearby”, Seaman continues.

The reconstructed head is on display at the current Eastbourne Ancestors exhibition, Redoubt Fortress (open till November 16 2014).