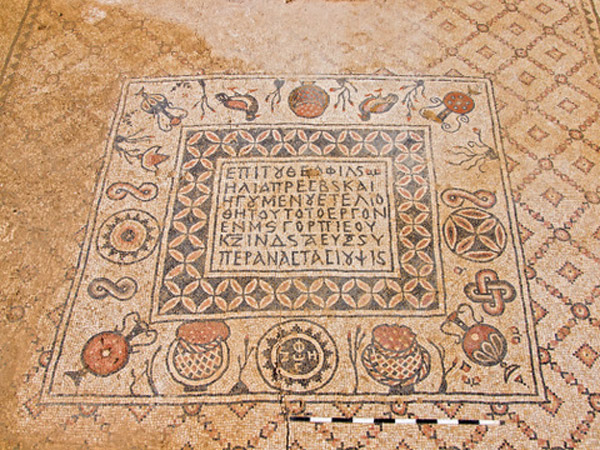 Mosaics In The Desert

Israel Antiquities Authority archaeologists digging at the site of Hura, Negev desert in the framework of salvage excavations,  discovered the impressive remains of an Early Christan monastery, where mosaics were found in a good state of preservation.

The team led by Daniel Varga, the monastic complex dates from the second half of the 6th c. AD. The space covered by architectural remains measures overall 20 × 35 metres and was divided into halls. Two of these halls, identified with the prayer room and dining room respectively, were paved with mosaic “carpets”, bearing elaborate designs and four dedicatory inscriptions mentioning the names of the monastery’s abbots (Eliyahu, Nonus, Solomon and Ilrion), and the dates when the pavements were constructed in the different halls. Of the four inscriptions, three are written exclusively in Greek and one is bilingual, in Greek and Syriac.

Archaeologists were able to locate the complex’s entrance to the West, where a wing divided into four service rooms was developed. The wing also had a mosaic, much of which was found destroyed due to the building’s collapse at the end of the Byzantine period.

Of the portable finds from the excavation, archaeologists point on pottery sherds from large storage vessels (amphorae, jars), cooking pots, kraters and bowls. Remains of glass vessels as well as coins suggest that the monastery was an important centre of material culture.

According to Past Horizons, “the Israel Antiquities Authority, together with the Netivei Israel Company, Hura municipality and Wadi ‘Attir Association, plan on relocating the monastery, including its mosaics, to the Wadi ‘Attir agricultural/tourism project adjacent to Hura”.