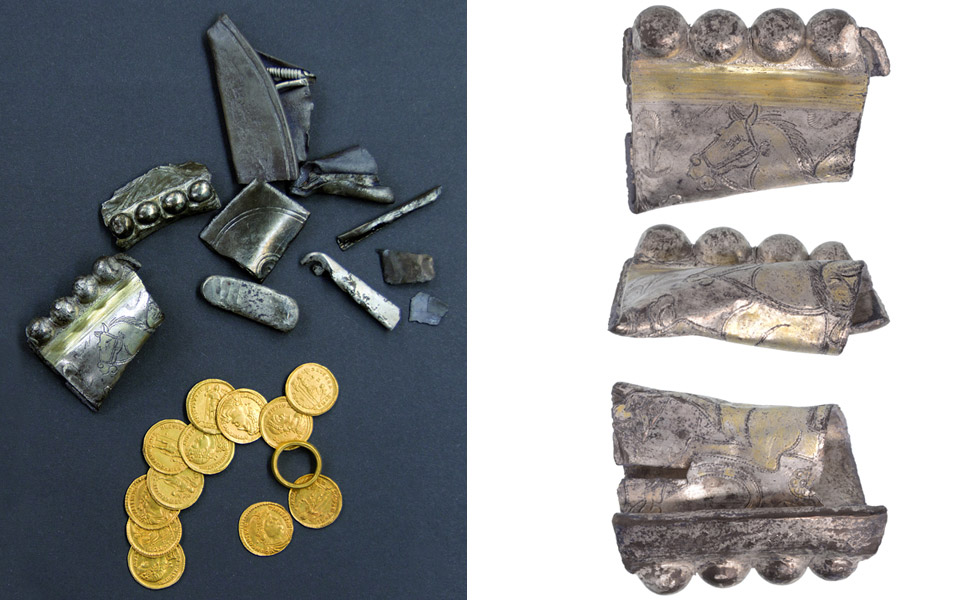 The Echt Hoard: a Late Roman treasure from the edge of the Empire

Shown at a press conference on Friday, April 25 in Limburg Museum (Venlo)

It was made of silver and gold and consisted of coins, jewellery and tableware to be used by a 5th c. chieftain, loyal to the Romans, who led an area on the egde of the Roman Empire (modern day Netherlands). It seems to have been buried deliberately and for religious purposes in a time of crisis. With some of its pieces located by a farmer using a metal detector in 1990, archaeologists brought it to light completely, alongside the pit it was originally placed, at the start of 2014. This is a short story of the Echt hoard, a unique source of info on life and dominion in the egde of the Empire during its final years.

The group of precious artefacts was located near Echt (Netherlands) and consists of 1 gold ring, 1 silver ingot, 9 cut and bent silver fragments representing various pieces of tableware 12 gold coins – the latest struck by Constantine III (407-411). Accodring to a report from VU University of Amsterdam, reproduced by Past Horizons, “the hacksilver comes from various pieces of tableware. One fragment contains an engraving of a gold plated horse and the rider holds a spear in his right hand. The rearing horse appears to be trampling a lion and this would be part of a much larger plate depicting hunting scenes. Based on the edge curve of this platter it would have measured over 70 cm in diameter and have a weight of 2.25kg”.

Tableware represented a status symbol for the Romans and it was often given by the Roman State as a diplomatic gift to authorities of conquered lands (Roman dignitaries, tribal leaders, client kings) to secure their loyalty. Many groups of tableware have come to light in distant parts of the Empire, such as Germany and Scotland, with the Rheinland area itself having a good record of such groups: with only coins (Obbicht, Blerick, Venlo), with a combination of coins and neck rings (Beilen, Velp-1), with only gold neck rings (Olst, Rhenen, Velp-2), with coins and a helmet (Kessel).

Apparently, the bribing game was no good for the Romans. The need for bribery drained the Empire’s coffers leading to the need to use hacklilver instead of pure silver, at least from teh beginning of the 5th century.

In that framework, the Echt hoard can be associated with a Germanic officer in Roman service being active in the area during a time of monetary crisis for the Empire. But in what historical conditions?

The presence of Constantine III coinage in the group certainly gives a limit to the chronological horizon of the story surrounding it. According to a much questioned report by the Byzantine historian Zosimus, Constantine III tried to re-secure the entire Roman Rhine frontier against Germanic invaders. But while the record of forts built in the area around that time is poor to suggest the Emperor acted so through reinforcing fortifications, written sources (Zosimus but also Orosius) suggests that he had actually bought the military support of local Germanic tribes by a liberal use of the Empire’s money bag. Therefore, Constantine III could well have used the treasure to buy the local tribesman’s loyalty. The hoard’s burying shortly after, can be connected with the defeat and execution of Constantine by his successor Constantius in 411.

The Echt hoard was lately presented during a press conference in April 25 in Limburg Museum (Venlo), the Netherlands.