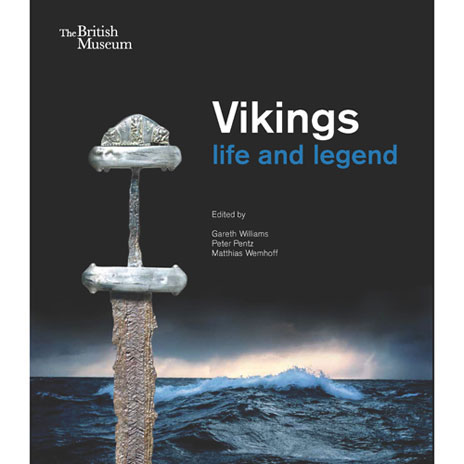 A rich and vivid account of the impact of the Vikings throughout the world, published to accompany the exhibition Vikings: life and legend, 6 March – 22 June.

This title and exhibition presents the ever-popular subject in a new way, viewing the Vikings in a global context (rather than focusing on northern Europe) and examining the extent of cultural, religious and economic influences as a result of these contacts.

Beautifully illustrated with an extraordinary range of objects from international collections and featuring new discoveries by archaeologists and metal-detectorists, the cultural connections between Europe, Byzantium and the Middle East are examined here in absorbing detail.

From stunning jewellery to ferocious-looking swords, and from beautiful amulets and charms to the longest Viking ship to be found to date – this book highlights the remarkable diversity of peoples and cultures that the Vikings encountered.

A lively and accessible read for the general reader and experts alike.

Gareth Williams is Curator of Early Medieval Coins at the British Museum.

Peter Pentz is a Curator of Danish Prehistory at the National Museum of Denmark, Copenhagen.

Matthias Wemhoff is Director of the Museum of Prehistory and Early History, Berlin.