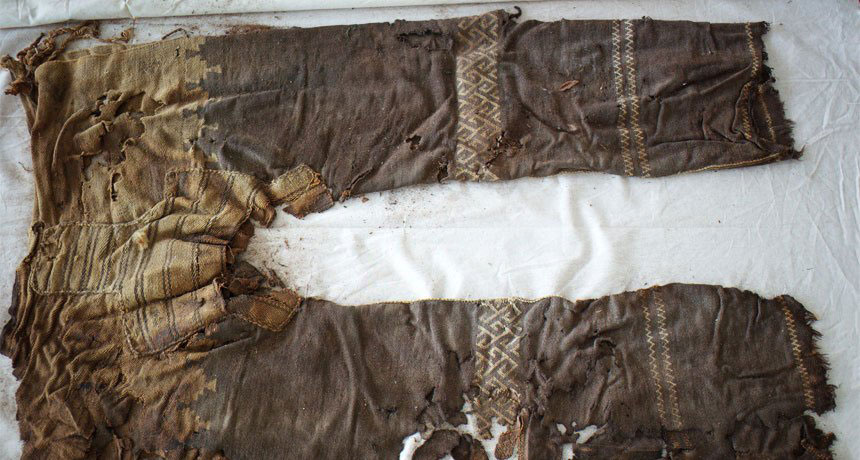 A ground-breaking achievement in the history of cloth making

The earliest pair of trousers was found in western China. With straight-fitting legs and a wide crotch, the ancient wool trousers resemble modern riding pants.

A new research was conducted by archaeologists Ulrike Beck and Mayke Wagner of the German Archaeological Institute in Berlin. The discoveries support previous work suggesting that nomadic herders in Central Asia invented pants to provide bodily protection and freedom of movement for horseback journeys and mounted warfare.

Scientists presented “the first report on the design and manufacturing process of trousers excavated at Yanghai cemetery near the Turfan oasis, western China. In tombs M21 and M157 fragments of woollen trousers were discovered which have been radiocarbon dated to the time interval between the 13th and the 10th century BC. Their age corresponds to the spread of mobile pastoralism in eastern Central Asia and predates the widely known Scythian finds.

“Using methods of fashion design, the cut of both trousers was studied in detail. The trousers were made of three independently woven pieces of fabric, one nearly rectangular for each side spanning the whole length from waistband to hemline at the ankle and one stepped cross-shaped crotch-piece which bridged the gap between the two side-pieces. The tailoring process did not involve cutting the cloth: instead the parts were shaped on the loom, and they were shaped in the correct size to fit a specific person. The yarns of the three fabrics and threads for final sewing match in color and quality, which implies that the weaver and the tailor was the same person or that both cooperated in a highly coordinated way. The design of the trousers from Yanghai with straight-fitting legs and a wide crotch-piece seems to be a predecessor of modern riding trousers”. (Quaternary International, May 22, 2014)

The new epoch of horseback riding

Together with horse gear and weapons as grave goods in both tombs the archaeologists’ results “specify former assumptions that the invention of bifurcated lower body garments is related to the new epoch of horseback riding, mounted warfare and greater mobility. Trousers are essential part of the tool kit with which humans improve their physical qualities”, the scientists write.

“This new paper definitely supports the idea that trousers were invented for horse riding by mobile pastoralists, and that trousers were brought to the Tarim Basin by horse-riding peoples,” remarks linguist and China authority Victor Mair of the University of Pennsylvania. Previously, Europeans and Asians wore gowns, robes, tunics, togas or a three-piece combination of loincloth and individual leggings — as observed on the 5,300-year-old body of Ötzi the Iceman.

A dry climate and hot summers helped preserve human corpses, clothing and other organic material in the Tarim Basin. More than 500 tombs have been excavated there since the early 1970s.

Burgundy trousers probably made of wool were found on a 2,600-year-old individual known as Cherchen Man during earlier research by Mair on mummies from several Tarim Basin sites, while trousers of Scythian nomads from West Asia date to roughly 2,500 years ago.

According to Mair horse riding might have began about 3,400 years ago and trouser-making came shortly thereafter in wetter regions to the north and west of the Tarim Basin. However ancient trousers from those areas are not likely to have been preserved, Mair says.

Horse riding’s origins are uncertain and could date to at least 4,000 years ago, comments archaeologist Margarita Gleba of University College London. If so, she says, “I would not be surprised if trousers appeared at least that far back.”

The two trouser-wearing men entombed at Yanghai were roughly 40 years old and had probably been warriors as well as herders, the investigators say. One man was buried with a decorated leather bridle, a wooden horse bit, a battle-ax and a leather bracer for arm protection. Among objects placed with the other body were a whip, a decorated horse tail, a bow sheath and a bow.

Beck and Wagner’s team calls the ancient invention of trousers “a ground-breaking achievement in the history of cloth making.” That’s not too shabby for herders who probably thought the Gap was just a place to ride their horses through.