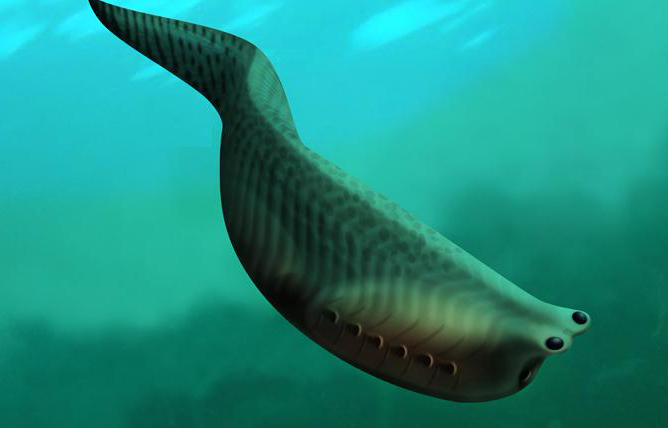 “Once the jaws have developed, the whole world opens”

New fossil find pinpoints the origin of jaws in vertebrates

A major fossil discovery in Canada sheds new light on the development of the earliest vertebrates, including the origin of jaws, the first time this feature has been seen so early in the fossil record.

The fossilised fish specimens, dating from the Cambrian period (around 505 million years old), were discovered in the Canadian Rockies. The fish, known as Metaspriggina, shows pairs of exceptionally well-preserved arches near the front of its body. The first of these pairs, closest to the head, eventually led to the evolution of jaws in vertebrates.

Fish fossils from the Cambrian period are very rare and usually poorly preserved. This new discovery shows in unprecedented detail how some of the earliest vertebrates developed – the starting point of a story which led to animals such as later fish species, but also dinosaurs and mammals such as horses and even ourselves. The findings are published in the 11 June edition of the journal Nature.

Fossils of Metaspriggina were recovered from several locations including the Burgess Shale site in Canada’s Rocky Mountains, one of the richest Cambrian fossil deposits in the world. These fossils shed new light on the Cambrian ‘explosion’, a period of rapid evolution starting around 540 million years ago, when most major animal phyla originated.

Previously, only two incomplete specimens of Metaspriggina had been identified. During expeditions conducted by the Royal Ontario Museum in 2012, 44 new Burgess Shale fossils were collected near Marble Canyon in Kootenay National Park in British Columbia, which provide the basis for this study. Researchers from the University of Cambridge and the Royal Ontario Museum/University of Toronto used these fossils, along with several more specimens from the eastern United States, to reclassify Metaspriggina as one of the first vertebrates.

The fossils, which date from 505 million years ago, also show clearly for the first time how a series of rod-like structures, known as the gill or branchial arches, were arranged in the earliest vertebrates. These arches have long been known to have played a key role in the evolution of vertebrates, including the origin of jaws, and some of the tiny bones in the ear which transmit sound in mammals. Until now, however, a lack of quality fossils has meant that the arrangement of these arches in the first vertebrates had been hypothetical.

Vertebrates first appear in the fossil record slightly earlier than these finds, but pinpointing exactly how they developed is difficult. This is because fossils of such animals are rare, incomplete and open to varying interpretations, as they show soft tissues which are difficult to identify with complete certainty.

“Once the jaws have developed, the whole world opens”

The new fossils of Metaspriggina are remarkably well-preserved. The arrangement of the muscles shows these fish were active swimmers, not unlike a trout, and the animals saw the world through a pair of large eyes and sensed their surrounding environment with nasal structures.

“The detail in this Metaspriggina fossil is stunning,” said lead author Professor Simon Conway Morris of Cambridge’s Department of Earth Sciences. “Even the eyes are beautifully preserved and clearly evident.”

But it is the branchial arches which makes this discovery so important. Previously, they were thought to exist as a series of single arches, but Metaspriggina now shows that they in fact existed in pairs. The anteriormost pair of arches is also slightly thicker than the remainder, and this subtle distinction may be the very first step in an evolutionary transformation that in due course led to the appearance of the jaw. “Once the jaws have developed, the whole world opens,” said Professor Conway Morris. “Having a hypothetical model swim into the fossil record like this is incredibly gratifying.”

“Obviously jawed fish came later, but this is like a starting post – everything is there and ready to go,” said the paper’s co-author Dr Jean-Bernard Caron, Curator of Invertebrate Palaeontology at the Royal Ontario Museum and and associate professor in the Departments of Earth Sciences and Ecology & Evolutionary Biology at the University of Toronto. “Not only is this a major new discovery, one that will play a key role in understanding our own origins, but Marble Canyon, the new Burgess Shale locality itself has fantastic potential for revealing key insights into the early evolution of many other animal groups during this crucial time in the history of life.”

David Wilks, Member of Canadian Parliament for Kootenay-Columbia, noted, “The Government of Canada is excited about this incredible fossil find. As an international leader in conservation and steward of the Burgess Shale, Parks Canada is pleased to provide its research partners with access to the fossils. Their remarkable discoveries inform the work we do to share this rich natural history through our popular guided hikes, and to protect this important Canadian heritage in a national park and UNESCO World Heritage Site.”