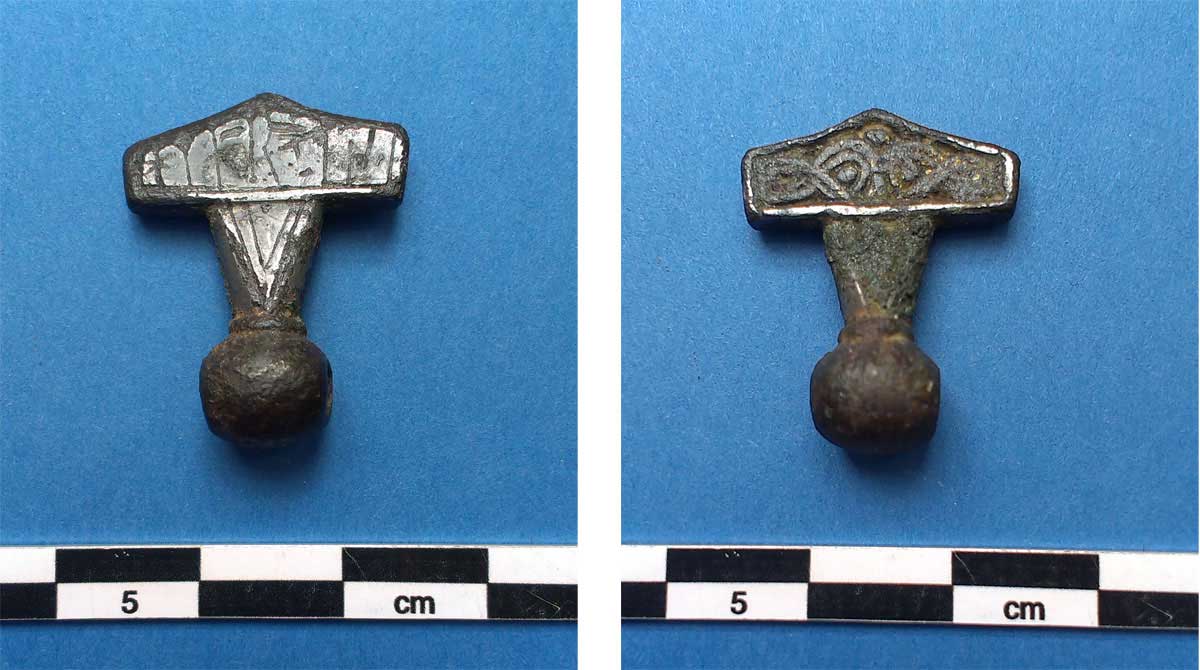 The only one with a runic inscription

A small 10th-century hammer amulet was found recently on the Danish Island of Lolland. Over 1000 similar amulets have been found in across Scandinavia, the British Isles, Russia and the Baltic. The Lolland pendant however is unique, as it is the only one with a runic inscription.

This particular torshammere (Thor’s Hammer Amulet) was found at Købelev and reported to the Museum Lolland-Falster archaeologist Anders Rasmussen by detectorist Torben Christjansen.

The Vikings often wore Thor’s hammer for protection. “It was the amulet’s protective power that counted, and often we see torshammere and Christian crosses appearing together, providing double protection”, said Peter Pentz, an archaeologist at the National Museum of Denmark.

This object is cast in bronze and has traces of silver or tin plating as well as gold plating, and is the first ever to be found with runes inscribed. It was thanks to the runes that archaeologists could confirm that these amulets actually do depict Thor’s hammer.

Over the years there had been doubt cast on whether these small amulets indeed represent a hammer. Some said the shaft is too short, while others believe that the hammer would not have had a symmetrical head such as this one. The Lolland amulet might place this particular debate to rest, as the runic inscription clearly reads: “Hmar x is” (“This is a Hammer”).

However, the person who inscribed these runes was not a skilled writer, as the proper spelling should have been Hamar. Also the S-rune was reversed.

Another reason why it took some time to comprehend the inscription was that the runes are very small; they range in height from 3 to 7 mm.

The Lolland find is also interesting, because Viking age written culture is dominated by the approximately 260 rune stones found throughout Denmark and southern Sweden. Other inscribed items although quite rare can give a different impression of the writing culture than the often rather formally bound runic texts found on monuments.

The runes of the small Thor’s hammer from Købelev translate into modern English as ‘Hammer is‘ where the x indicates the separator between the two words. This translates more properly into ‘This is a hammer‘.  This could indicate that the inscriber was absolutely literate, but nevertheless still managed to make an inscription fit into a tiny space.

The find points to a society where written literacy was respected. In this sense, the creator of the amulet would have extra status due to the fact that he was able to write at all.

Fragments of silver needles and a mould for making brooches found apart from the torshammere indicate that there may have been a jewellery workshop in the area, so the hammer might have been made by a local craftsperson.

Museum Lolland-Falster has no plans to excavate the Viking site at Købelev, but instead are working with the finder to continue detailed detector surveys on site.