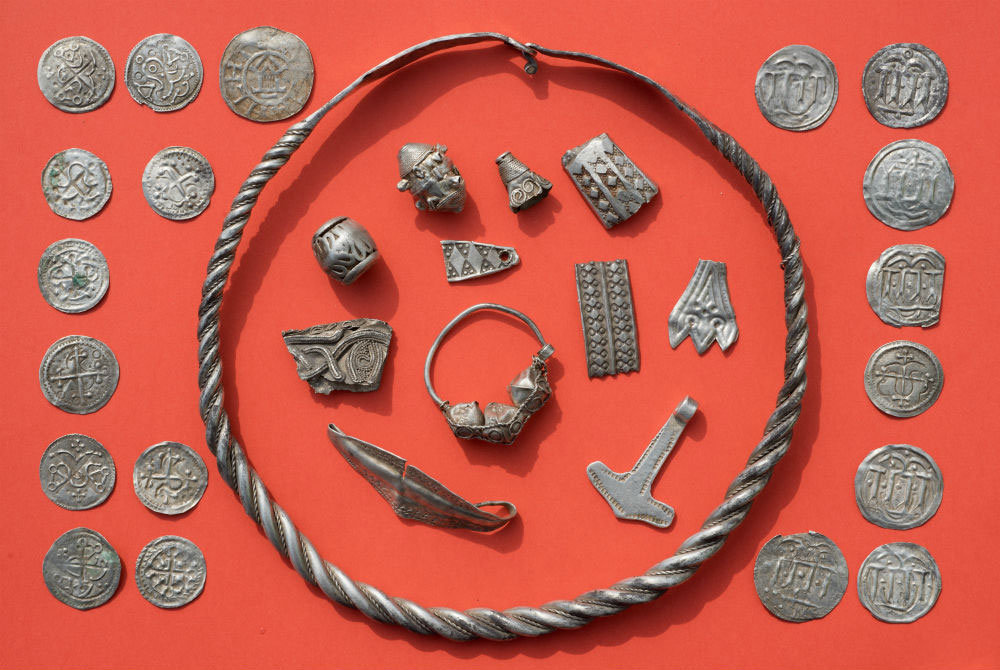 By a 13-year-old and an amateur archaeologist

A 13-year-old boy and an amateur archaeologist found a “unique” treasure on the German island of Rügen, that may have belonged to King Harald Bluetooth who brought Christianity to Denmark.

The treasure consists of hundreds of coins, pearls, a Thor’s hammer, broken rings and brooches as announced by the German News Agency (DPA) mentioning the amateur archaeologist Rene Schön and the regional archaeological bureau.

In January, Schön and high school student Luca Malaschnitschenko located a coin with the help of a metal detector in a field near the village of Schaprode on the Baltic Sea island of Rügen. On April 14 and 15, the local authorities went ahead with uncovering the treasure.

Around 100 coins appear to date from the era of the kingdom of Harald the 1st (910-987), a king who rejected Viking beliefs, united Denmark and introduced Christianity. Also found were many earlier coins originating from very distant lands, such as a dirham from Damascus made into a piece of jewellery and dating from 714.

The most recent coins date from 980, which make scholars believe that this treasure could have been hidden by the immediate circle of Harald 1st who, having lost a battle against his own son, fled to Pomerania where he died a year later according to 10th century literature.

“Here we have a rare case, where a discovery looks like it is linked to historical sources”, says Detlef Janssen, head archaeologist of the small German state of Mecklenburg-West Pomerania, “the Schaprode treasure is a unique discovery of its kind”.

Jewellery dating from the same era had already been discovered not far from there, on the island of Hinensee, at the end of the 19th century. Historians of the region argue that these precious artefacts could also have been hidden during the king’s escape.

Harald Bluetooth was an important historical figure in Scandinavia. Bluetooth, the wireless communication technology was named after him.

Moreover, the Bluetooth symbol is a combination of two letters from the runic alphabet that stand for king Harald’s initials.