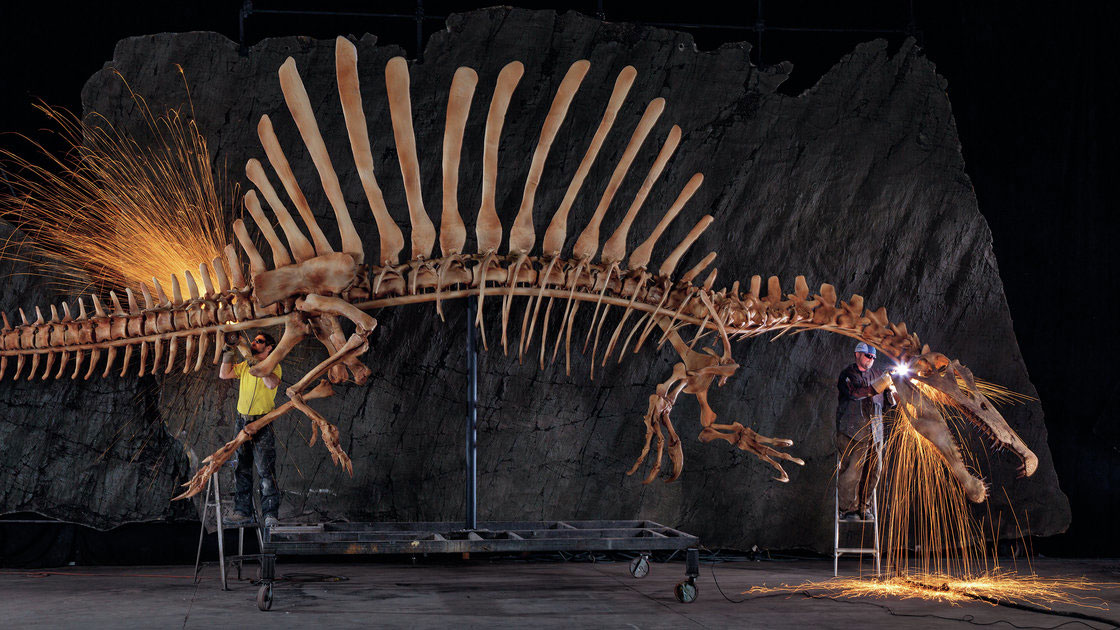 Scientists unveiled what appears to be the first truly semiaquatic dinosaur, Spinosaurus aegyptiacus. New fossils of the massive Cretaceous-era predator reveal it adapted to life in the water some 95 million years ago, providing the most compelling evidence to date of a dinosaur able to live and hunt in an aquatic environment. The fossils also indicate that Spinosaurus was the largest known predatory dinosaur to roam the Earth, measuring more than 9 feet longer than the world’s largest Tyrannosaurus rex specimen. These findings, published in the journal Science, are also featured in the October National Geographic magazine cover story available online Sept. 11. In addition, Spinosaurus will be the subject of a new exhibition at the National Geographic Museum, opening Sept. 12, as well as a National Geographic/NOVA special airing on PBS Nov. 5 at 9 p.m.

An international research team — including paleontologists Nizar Ibrahim and Paul Sereno from the University of Chicago; Cristiano Dal Sasso and Simone Maganuco from the Natural History Museum in Milan, Italy; and Samir Zouhri from the Université Hassan II Casablanca in Morocco — found that Spinosaurus developed a variety of previously unknown aquatic adaptations. The researchers came to their conclusions after analyzing new fossils uncovered in the Moroccan Sahara and a partial Spinosaurus skull and other remains housed in museum collections around the world as well as historical records and images from the first reported Spinosaurus discovery in Egypt more than 100 years ago. According to lead author Ibrahim, a 2014 National Geographic Emerging Explorer, “Working on this animal was like studying an alien from outer space; it’s unlike any other dinosaur I have ever seen.”

The aquatic adaptations of Spinosaurus differ significantly from earlier members of the spinosaurid family that lived on land but were known to eat fish. These adaptations include:

– Small nostrils located in the middle of the skull. The small size and placement of the nostrils farther back on the skull allowed Spinosaurus to breathe when part of its head was in water.

– Neurovascular openings at the end of the snout. Similar openings on crocodile and alligator snouts contain pressure receptors that enable them to sense movement in water. It’s likely these openings served a comparable function in Spinosaurus.

– Giant, slanted teeth that interlocked at the front of the snout. The conical shape and location of the teeth were well-suited for catching fish.

– A long neck and trunk that shifted the dinosaur’s center of mass forward. This made walking on two legs on land nearly impossible, but facilitated movement in water.

– Powerful forelimbs with curved, blade-like claws. These claws were ideal for hooking or slicing slippery prey.

– A small pelvis and short hind legs with muscular thighs. As in the earliest whales, these adaptations were for paddling in water and differ markedly from other predatory dinosaurs that used two legs to move on land.

– Strong, long-boned feet and long, flat claws. Unlike other predators, Spinosaurus had feet similar to some shorebirds that stand on or move across soft surfaces rather than perch. In fact, Spinosaurus may have had webbed feet for walking on soft mud or paddling.

– Loosely connected bones in the dinosaur’s tail. These bones enabled its tail to bend in a wave-like fashion, similar to tails that help propel some bony fish.

– Enormous dorsal spines covered in skin that created a gigantic “sail” on the dinosaur’s back. The tall, thin, blade-shaped spines were anchored by muscles and composed of dense bone with few blood vessels. This suggests the sail was meant for display and not to trap heat or store fat. The sail would have been visible even when the animal entered the water.

More than a century ago, German paleontologist Ernst Freiherr Stromer von Reichenbach first discovered evidence of Spinosaurus in the Egyptian Sahara. Sadly, all of Stromer’s fossils were destroyed during the April 1944 Allied bombing of Munich, Germany. Ibrahim, however, was able to track down Stromer’s surviving notes, sketches and photos in archives and at the Stromer family castle in Bavaria to supplement Stromer’s surviving publications.

The new Spinosaurus fossils were discovered in the Moroccan Sahara along desert cliffs known as the Kem Kem beds. This area was once a large river system, stretching from present-day Morocco to Egypt. At the time, a variety of aquatic life populated the system, including large sharks, coelacanths, lungfish and crocodile-like creatures, along with giant flying reptiles and predatory dinosaurs.

The most important of the new fossils, a partial skeleton uncovered by a local fossil hunter, was spirited out of the country. As a result, critical information about the context of the find was seemingly lost, and locating the local fossil hunter in Morocco was nearly impossible. Remarked Ibrahim, “It was like searching for a needle in a desert.” After an exhaustive search, Ibrahim finally found the man and confirmed the site of his original discovery.

To unlock the mysteries of Spinosaurus, the team created a digital model of the skeleton with funding provided by the National Geographic Society. The researchers CT scanned all of the new fossils, which will be repatriated to Morocco, complementing them with digital recreations of Stromer’s specimens. Missing bones were modeled based on known elements of related dinosaurs. According to Maganuco, “We relied upon cutting-edge technology to examine, analyze and piece together a variety of fossils. For a project of this complexity, traditional methods wouldn’t have been nearly as accurate.”

The researchers then used the digital model to create an anatomically precise, life-size 3-D replica of the Spinosaurus skeleton. After it was mounted, the researchers measured Spinosaurus from head to tail, confirming their calculation that the new skeleton was longer than the largest documented Tyrannosaurus by more than 9 feet. According to Sereno, head of the University of Chicago’s Fossil Lab, “What surprised us even more than the dinosaur’s size were its unusual proportions. We see limb proportions like this in early whales, not predatory dinosaurs.”