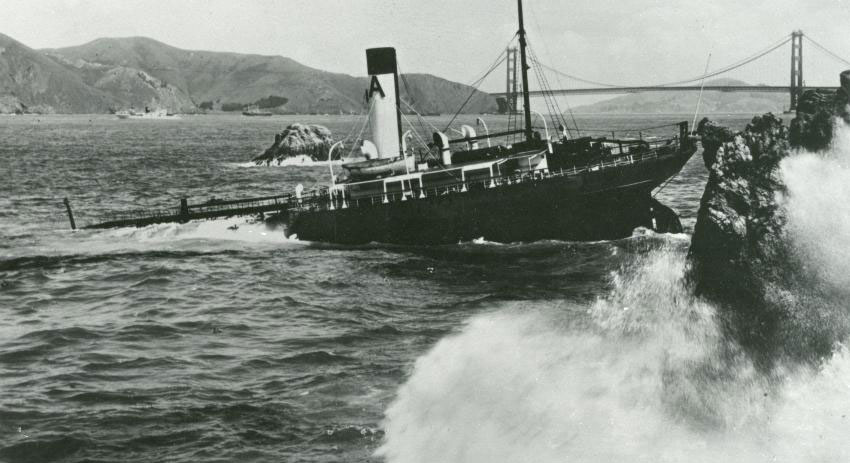 A team of the National Oceanic and Atmospheric Administration (NOAA) researchers confirmed the discovery just outside San Francisco’s Golden Gate strait of the 1910 shipwreck SS Selja and an unidentified early steam tugboat wreck tagged the “mystery wreck.” The researchers also located the 1863 wreck of the clipper ship Noonday, currently obscured by mud and silt on the ocean floor.

These and other shipwreck investigations mark the first mission of a two-year project to locate, identify and better understand some of the estimated 300 wrecks in Gulf of the Farallones National Marine Sanctuary, and the adjacent Golden Gate National Recreation Area.

“The waters of the sanctuary and the park are one of the great undersea museums in the nation,” said James Delgado, director of Maritime Heritage for the Office of National Marine Sanctuaries. “These wrecks tell the powerful story of the people who helped build California and opened America to the Pacific for nearly two centuries. Finding the remains of these ships links the past to the present.”

NOAA’s Office of National Marine Sanctuaries and the U.S. National Park Service, which began researching the wrecks in the 1980s, published the first detailed inventory and history of the submerged heritage of the region in 1990. Since then, Robert Schwemmer, project co-leader and NOAA maritime archaeologist, has conducted new research in archives around the world, and interviewed fishermen and pioneering wreck divers like Bruce and Robert Lanham of San Francisco.

The Lanham brothers have discovered a number of historic Bay-area wrecks. Bruce Lanham joined the recent NOAA expedition, and with his brother led the NOAA team to a widely scattered wreck site they believed was the Selja. In 1910 the steamer Selja sank in a fatal collision, which featured prominently in a legal case that ultimately was argued before the U.S. Supreme Court over a key aspect of maritime law, the “rule of the road.”

“Bruce and Bob were crucial to the success of the mission as was volunteer Gary Fabian, who re-analyzed hours of NOAA sonar data to pinpoint wreck sites,” said Schwemmer.

One of the targets Fabian pointed out was the right size and in the right location to be the clipper ship Noonday, lost in 1863 and part of the fleet of fast-sailing vessels that brought men and supplies to California during and after the Gold Rush. “Noonday Rock,” north of the Farallones, was named for the wreck.

In addition to the newly identified ships, Vitad Pradith, a researcher with NOAA’s Office of Coast Survey Navigation Response Team 6, completed the first-ever sonar survey of the submerged portions of the wrecks of the tankers Frank H. Buck and Lyman Stewart. The engines of both vessels are visible at low tide off San Francisco’s Lands End, inside the waters of Golden Gate National Recreation Area.

“Buck and Stewart are probably the best known wrecks in the park,” said Stephen Haller, park historian, who joined the project team on the just-completed mission. “We now have a better understanding of how the two wrecks lie next to each other, and what has survived beneath the surface.”

The NOAA team used remote controlled cameras and sensing equipment and will continue to analyze data from the recent dives, conduct additional research, and plan for the next phase. Brian Johnson, Gulf of the Farallones sanctuary deputy superintendent, said findings from current and future research expeditions will be shared with the public.

“The shipwrecks off the Golden Gate are places to explore, discover and appreciate our country’s maritime cultural heritage,” Johnson said. “Through the study, protection and promotion of this diverse legacy, Americans can learn more about our shared past.”