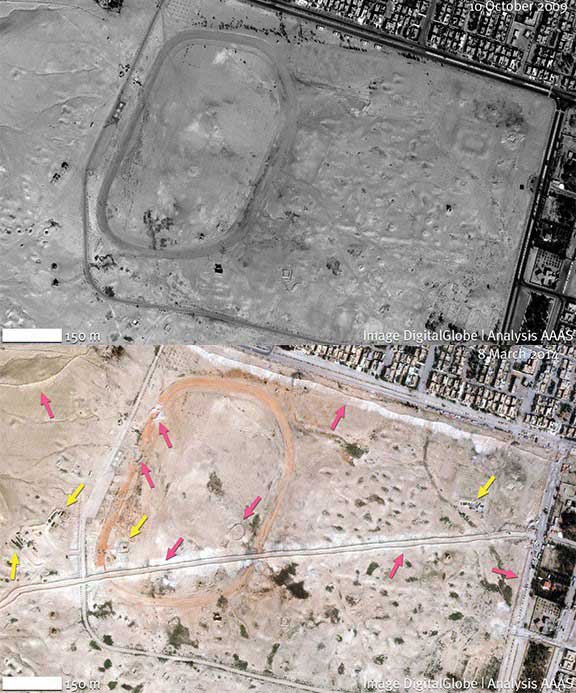 In war-torn Syria, five of six World Heritage sites now “exhibit significant damage” and some structures have been “reduced to rubble,” according to new high-resolution satellite image analysis by the nonprofit, nonpartisan American Association for the Advancement of Science (AAAS).

The AAAS analysis, offering the first comprehensive look at the extent of damage to Syria’s priceless cultural heritage sites, was completed in partnership with the University of Pennsylvania Museum of Archaeology and Anthropology’s Penn Cultural Heritage Center (PennCHC) and the Smithsonian Institution, and in cooperation with the Syrian Heritage Task Force. Funded by the National Science Foundation, the analysis provides authoritative confirmation of previous on-the-ground reports of damage to individual sites.

“Only one of Syria’s six World Heritage sites—the Ancient City of Damascus—appears to remain undamaged in satellite imagery since the onset of civil war in 2011,” said Susan Wolfinbarger, director of the Geospatial Technologies and Human Rights Project at AAAS. Historic structures at the other five sites, including ancient mosques, schools, and civilian as well as government buildings, have all been damaged and, in some cases, destroyed, AAAS reported. Wolfinbarger added, however, that “the Damascus site also could have damage not visible in satellite images.”

AAAS released its analysis on the eve of a Smithsonian Institution meeting recognizing the 1954 Hague Convention for the Protection of Cultural Property in the Event of Armed Conflict.

The AAAS analysis reveals extensive damage in Aleppo, one of the oldest continuously inhabited cities in the world, dating to the 2nd millennium B.C.: “In satellite imagery, massive destruction is obvious throughout the city, and especially at the World Heritage site of the Ancient City,” Wolfinbarger said. Destroyed structures include historic mosques and madrasas (Koranic schools), the Great Mosque of Aleppo, the Suq al-Madina, the Grand Serail of Aleppo, the Hammam Yalbougha an-Nasry, the Khusruwiye Mosque, the Carlton Citadel Hotel, and the Khan Qurt Bey caravanserai, as well as other historic buildings south and north of the citadel.

Images captured in 2011 and 2014 revealed particularly severe damage to the Great Mosque, the nearby Suq al-Madina, and the surrounding area. AAAS and its partners documented roof damage and a destroyed minaret as well as two craters on the eastern wall of the mosque. While the heaviest damage was seen just south of the citadel, destruction was also evident to the north—an area with buildings from the late Mamluk to Ottoman periods (13th-19th centuries).

Across Syria’s other World Heritage sites —the Ancient City of Bosra; the Ancient Site of Palmyra; the Ancient Villages of Northern Syria; and two castles, Crac des Chevaliers and Qal’at Salah El-Din— damage ranged from mortar impacts near an ancient Roman theater in Bosra, to military compounds in previously pristine archaeological sites, and new roads and earthen berms cut through the center of the Northern Roman Necropolis in Palmyra. UNESCO has said that Palmyra, located in the desert northeast of Damascus, “contains the monumental ruins of a great city that was one of the most important cultural centers of the ancient world,” marrying Graeco-Roman art with Persian influences.

At the Crac des Chevaliers castle, one of the best-known examples of Crusader fortification architecture, images captured in 2010 and 2014 showed “moderate structural damage” such as a 6-meter gash to its southeast tower and cratering of the grounds, AAAS found. In the Jebel Barisha Ancient Village Park, one of Northern Syria’s ancient villages, images captured before and after the onset of war revealed three new military compounds, two of which were within park boundaries.

“From our contacts and sources in Syria, we knew that there was damage to World Heritage sites,” said Brian I. Daniels, Director of Research and Programs, Penn Cultural Heritage Center, University of Pennsylvania Museum, “but this report surprised us by revealing just how extensive the destruction actually is.”

Corine Wegener, cultural heritage preservation officer for the Smithsonian Institution, said that organizing an international research community to study the primary causes of damage to cultural heritage in times of conflict will be critical to intervention efforts in Syria—a goal to be discussed at the September 19 meeting. “There is hope, and it lies with our Syrian colleagues because they are the stewards and caretakers of these sites, and they see the value in preserving and protecting them for future generations,” Wegener said. “What they need from their international colleagues is some help to do that—training, materials, and other support in the international arena for the notion that it is possible to mitigate and prevent damage to cultural heritage, even in the midst of conflicts.”

Continued AAAS research will further examine damage to Syria’s World Heritage sites, as well as to many other sites of cultural significance, Wolfinbarger said. In 2013, all six of the sites were placed on the “List of World Heritage in Danger,” maintained by UNESCO’s World Heritage Center. The United Nations has estimated that the Syrian crisis has claimed 100,000 lives, and millions have been displaced.

Along with Wolfinbarger, Daniels, and Wegener, the research team included Richard M. Leventhal of the University of Pennsylvania; and Jonathan Drake, Eric Ashcroft, and Katharyn Hanson of AAAS. Images from the WorldView-1 and WorldView-2 satellites were provided by DigitalGlobe.

The AAAS Geospatial Technologies and Human Rights Project, part of the association’s Scientific Responsibility, Human Rights and Law Program, had previously released reports on the conflict in Aleppo, which included an analysis of damage to the world heritage area there.