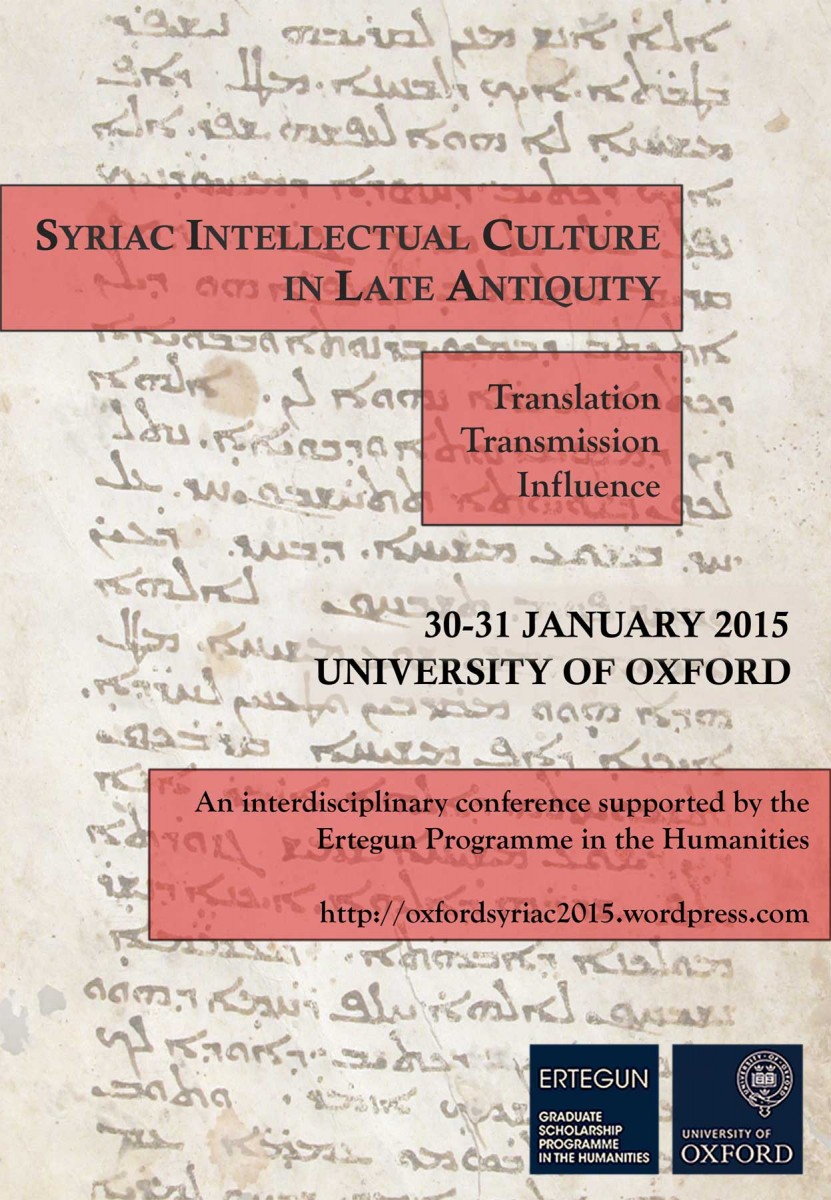 This conference explores the intellectual cultures of Syriac-language literary and scholarly communities of the late antique (c. 3rd-9th century) Near and Middle East. It will also provide an opportunity for postgraduate and emerging scholars in the fields of biblical studies, theology and religion, late antique and Byzantine studies, near eastern studies, and rabbinics to present their work on Syriac literature within the University of Oxford’s vibrant late antique studies community.

Keynote papers will be given by Jack Tannous (Princeton University) and Timothy Michael Law (University of St Andrews). Publication of selected conference papers is anticipated.

The conference welcomes proposals for papers on the following and related topics:

1. The reception and revision of Syriac biblical translations, especially works such as the Harklean and Syrohexaplaric versions and Jacob of Edessa’s Old Testament revision. How did Syriac authors navigate the diversity of translation options available to them? How were later translations and revisions received in both exegetical and liturgical contexts? Which textual variants were employed by exegetes, and in what contexts?

2. What role do translations of Greek patristic literature, such as the works of Gregory Nazianzen and Theodore of Mopsuestia, play in the context of Syriac literature? How ismaterial from Greek historiography, such as the ecclesiastical histories of Eusebius, Socrates, and Theodoret, translated and transmitted by Syriac chroniclers?

3. What factors played a part in the development of literary canons and exegetical traditions in Syriac? How did different communities determine which texts to elevate to canonical status? When and why were authors from rival communities read and utilized? How did Greek-language authors, such as Severus of Antioch, undergo a process of ‘Syriacization’? Which authors survived the decline of spoken Syriac and were translated into Christian Arabic, and how?

4. What forms did Syriac intellectual life take over the course of the period, in monastic, scholarly, and church communities? How did Syriac culture react to and interact with influences such as Aristotelian and neo-Platonist thought, rabbinic scholarship, and other vernacular literatures? What role did Syriac scholars play in the early development of Arabic-language intellectual culture, and how did this role affect or change their own traditions?

Those wishing to present a twenty-minute paper may submit a brief abstract (250 words or less) and academic biography to [email protected]. The deadline for submissions is Monday, 17 November 2014.