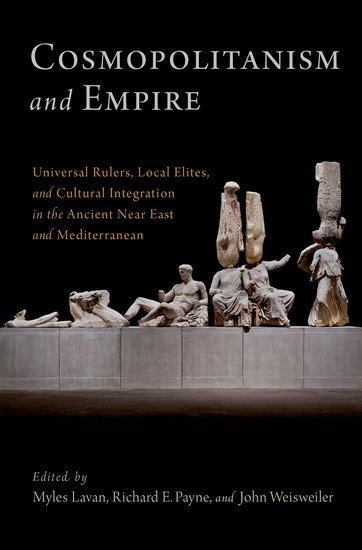 Richard Payne, Neubauer Family Assistant Professor, has co-edited with Myles Lavan and John Weisweiler a new book on Cosmopolitanism and Empire: Universal Rulers, Local Elites, and Cultural Integration in the Ancient Near East and Mediterranean. The book has appeared in the Oxford Studies in Early Empires series.

The empires of the ancient Near East and Mediterranean invented cosmopolitan politics. In the first millennia BCE and CE, a succession of territorially extensive states incorporated populations of unprecedented cultural diversity. Cosmopolitanism and Empire traces the development of cultural techniques through which empires managed difference in order to establish effective, enduring regimes of domination. It focuses on the relations of imperial elites with culturally distinct local elites, offering a comparative perspective on the varying depth and modalities of elite integration in five empires of the ancient Near East and Mediterranean. If cosmopolitanism has normally been studied apart from the imperial context, the essays gathered here show that theories and practices that enabled ruling elites to transcend cultural particularities were indispensable for the establishment and maintenance of trans-regional and trans-cultural political orders. As the first cosmopolitans, imperial elites regarded ruling over culturally disparate populations as their vocation, and their capacity to establish normative frameworks across cultural boundaries played a vital role in the consolidation of their power.

Together with an introductory chapter which offers a theory and history of the relationship between empire and cosmopolitanism, the volume includes case studies of Assyrian, Seleukid, Ptolemaic, Roman, and Iranian empires that analyze encounters between ruling classes and their subordinates in the domains of language and literature, religion, and the social imaginary. The contributions combine to illustrate the dilemmas of difference that imperial elites confronted as well as their strategies for resolving the cultural contradictions that their regimes precipitated.”