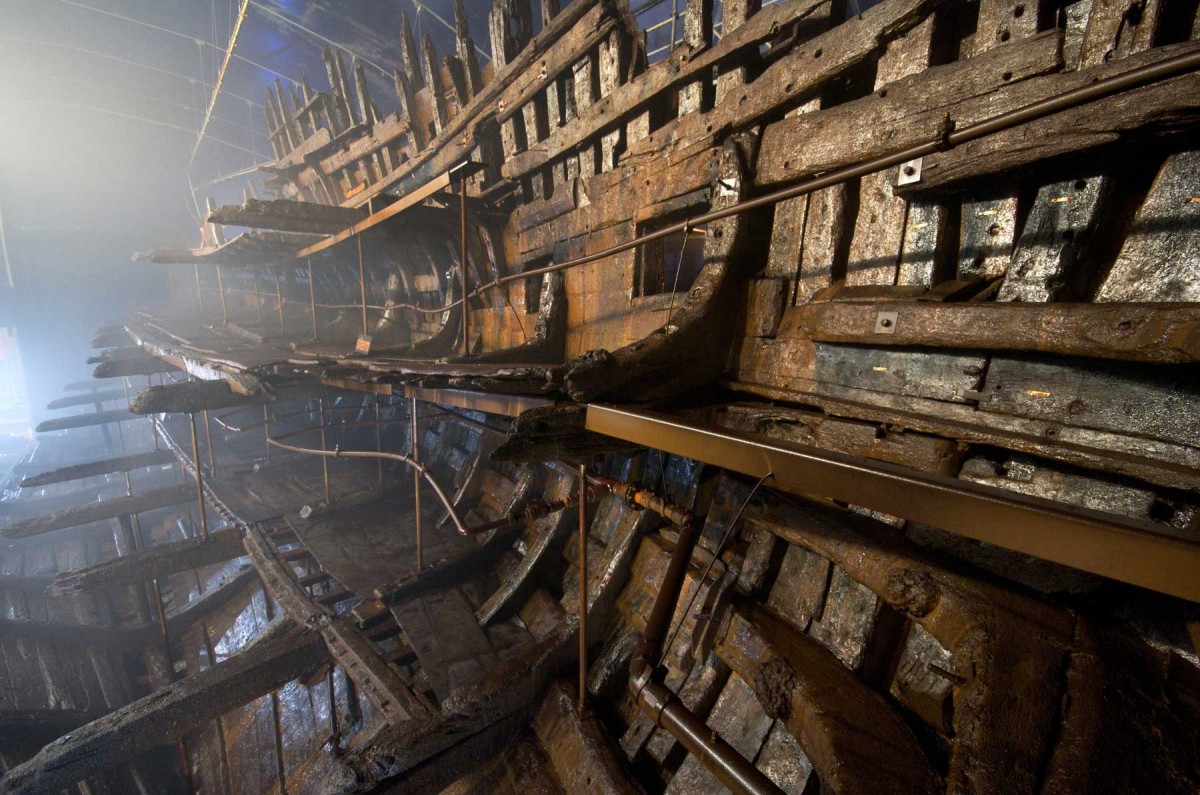 A safer, greener material for conserving waterlogged wooden artefacts, such as those recovered from Henry VIII’s ship Mary Rose, could preserve important pieces of our history for generations to come.

A team of researchers, led by the University of Cambridge in collaboration with the Mary Rose Trust, have designed a new, more effective, method for preserving waterlogged historical wooden artefacts. The natural polymer-based system appears to protect against all three primary causes of degradation in waterlogged wood, the first time this has been possible in a single treatment.

Initial tests of the material, carried out on wooden artefacts recovered from Henry VIII’s warship Mary Rose, have shown that it effectively protects waterlogged wood against the main causes of collapse, and is a safer, greener alternative to current methods. Details have been published yesterday (November 10, 2014) in the journal Proceedings of the National Academy of Sciences.

The material, which can adapt to the artefact it is treating and can be removed from the wood if necessary, uses barrel-shaped molecular ‘handcuffs’ called cucurbiturils to link separate polymer chains with different functionalities together into a single consolidant.

“A lack of new preservation methods could be putting the future survival of many important artefacts in jeopardy,” said Dr Zarah Walsh, the paper’s lead author, who performed the research while a post-doctoral researcher in the Department of Chemistry’s Melville Laboratory of Polymer Synthesis, which is led by Dr Oren Scherman.

A number of factors can contribute to the degradation of wooden artefacts once they are removed from the sea. Warping or cracking as the wood dries out, damage from bacteria, and the formation of acid due to the corrosion of iron fastenings and bolts can all cause cellulose and hemi-cellulose – significant components of the wood cell wall – to break down.

Currently, polyethylene glycol (PEG) is the primary treatment for reinforcing the wood cells in these types of artefacts. While PEG is easily applied, non-toxic and cheap, it has several disadvantages. Since it needs to be applied continuously over a period of approximately 20 years, the overall cost of application is high. Additionally, PEG does not protect wood against the acid produced in the wood from iron and sulphur compounds, which are often saturated into the wood while underwater. Iron acts as a catalyst in these artefacts: in the presence of oxygen and humidity, the iron can generate acid, which ‘eats’ through the cellulose and hemi-celluloses that remain.

A technique to remove the iron through continuous washing with an iron-binding compound was introduced many years ago, but has limited applicability due to the fact that it can weaken then structural stability of the wood and is limited to small artefacts. If the iron can be trapped and neutralised, however, it could actually make the wood stronger and more stable, as it becomes part of the wood’s structure.

The new material uses chitosan and guar, two naturally-sourced polymers, which are then functionalised to build a molecular cage around the iron ions, a process known as chelation. Chelation stabilises the iron, preventing it from acting as a catalyst and generating acid in the timbers, so that it does not pose a risk to the wood’s structure.

Using pieces of previously untreated waterlogged oak from the Mary Rose, the Cambridge researchers, working with Professor Mark Jones of the Mary Rose Trust and colleagues from the USA and Europe, showed that the consolidant can trap iron ions while enhancing structural stability. In addition, the material has antibacterial properties which protect against biological damage, aided by a functionalisation strategy developed by Emma-Rose Janeček, a co-author on the paper.

This new treatment is a two-tier interlocking system linked by the cucurbiturils: the underlying basic layer maintains structural integrity and hinders biological activity, while the second cross-linked layer chelates the iron. It can adapt to the artefact it is treating, and can be removed from the artefact if necessary.

However, even if there is no iron in the wood, the consolidant will still work. “The polymer gets stronger relative to the amount of iron that’s there – in that way it’s quite responsive to its environment,” said Dr Walsh.

The material has been designed to permeate into the wood and act as a structural support, but since liquids take so long to penetrate into wood, the initial tests were performed to test its suitability as a surface coating. Longer-term tests on larger objects will investigate how well it supports the wood from the inside.

“We don’t know yet how it will behave in a larger piece of wood – we still need to perform tests on larger artefacts and give the material time to fully penetrate the wood,” said Dr Walsh.