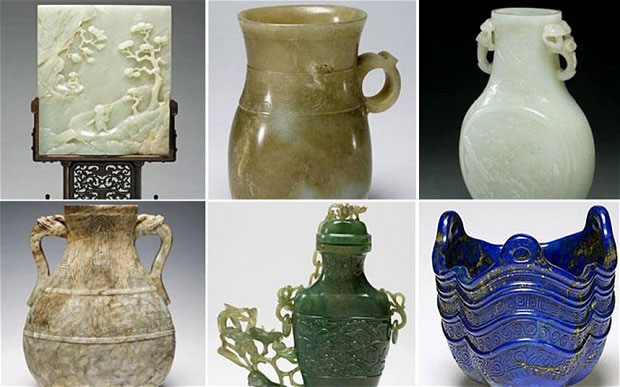 For the second time in two weeks

The Fitzwilliam Museum theft saw the loss of eighteen items including a Ming jade cup from the 14th century, eight pieces from the Qing dynasty, a 17th century jade elephant, and many other precious, and irreplaceable, items.

“The eighteen items stolen are mostly jade and are part of the museum’s permanent collection,” said Detective Chief Superintendent Karen Daber, who is leading the investigation. “The items stolen are very valuable and are of great cultural significance so we are absolutely committed to recovering them and bringing those who stole them to justice. This is an exceptional crime that we are taking very seriously.”

The earlier heist at Durham University’s Oriental Museum saw the loss of two Chinese artifacts, both from the Qing Dynasty. The Qing Dynasty was the last of China’s Imperial Dynasties and is an important part of Chinese history and culture. Because of the select nature of the thefts, and the fact the items were not on display together but stored in two separate cabinets, has led police to believe that they were stolen to order for a wealthy collector who is willing to bypass the legal system to get the artifacts they’re interested in.

Thefts of this kind, sometimes described as “laundry list” crimes or “stolen to order” thefts, are rare but not unheard of particularly when it comes to ancient antiquities. The items stolen from museums are, usually, to well-known and unique to be sold on the black market. Thieves with enough skill to bypass the sometimes strict security at large museums can’t be bothered to steal items that cannot be easily sold. But with stolen to order crimes these thieves are sent to steal a specific item or range of items with a buyer already lined up. They can be among the hardest treasures to recover.

The Durham University theft alone saw the loss of items totaling more than three million dollars. Cambridge University has not yet released the value of the eighteen items they lost in Friday night’s theft. The Fine Art and Antiques division of the Metropolitan Police are assisting in the investigation. Anyone with information that could help recover the stolen artifacts are asked to come forward and tell police.

The theft and looting of Chinese antiquities has long been a problem. Upon the death of famed fashion designer Yves Saint Laurent it was discovered that his art collection had unknowingly included several Chinese artifacts that had been stolen from Imperial Summer Palace by British and French troops a hundred and fifty years previously. Last year agents at the Newark Liberty International Airport recovered several stolen Chinese artifacts.