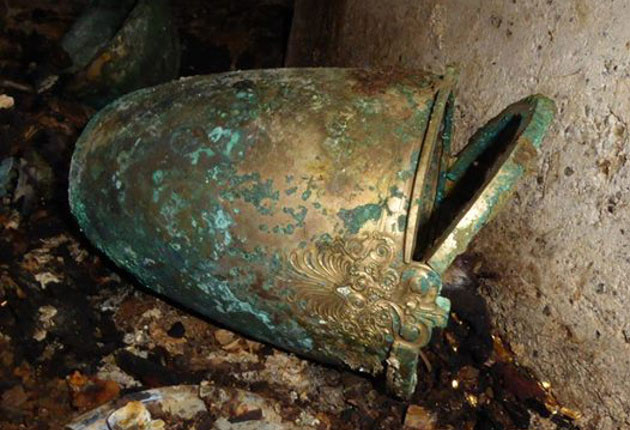 Another Macedonian tomb has been located at Aigai

According to head of excavations, the tomb is unlooted

Another tomb was unearthed this week in the cemetery of the tumuli at Aigai, northern Greece. According to head of the excavations, Angeliki Kottaridi, the tomb is unlooted.

The announcement of the find was made by the excavator herself, in a Facebook post. The photos posted were of a metal strainer vase (a symposium vessel, in which wine was mixed with water) in situ, thus on the tomb’s floor. The bronze vessel’s decoration shows “the exceptional level of Macedonian metallurgy”, as Mrs. Kottaridi stresses in her post.

The announcement text reads: “In the cemetery of the tumuli at Aigai a built (cist and not naos-shaped, which means Macedonian) grave of considerable dimensions was found, unlooted, a pleasant exception, since the Aigai necropolis had been brutally plundered by Gallic mercenaries of Pyrros in 276 BC and we rarely get the chance to find undisturbed burials. The deceased is a man who died during the time of Alexander the Great (336-323 BC). There is an interesting group of grave goods which -hopefully- will be exhibited in the first big exhibition for the inauguration of the new Aigai Museum. In order that you get an idea of what we saw today, here’s a photograph with the strainer vase (a symposium vessel in which they used to mix wine with water) where it was found, laying on the tomb’s floor… The scattered ”garbage” around it are remains of organic materials connected to the couch of the deceased… And a detail of the vessel’s decoration, so you can marvel the exceptional level of Macedonian metallurgy”.