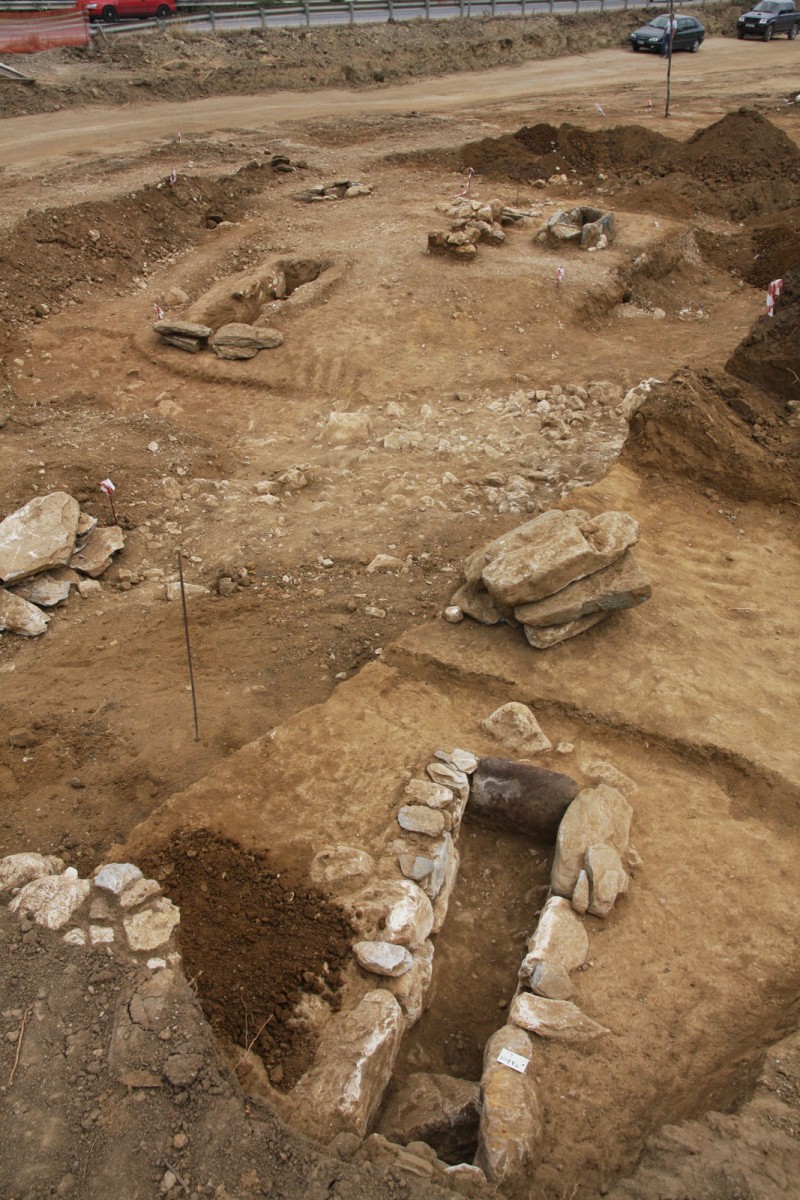 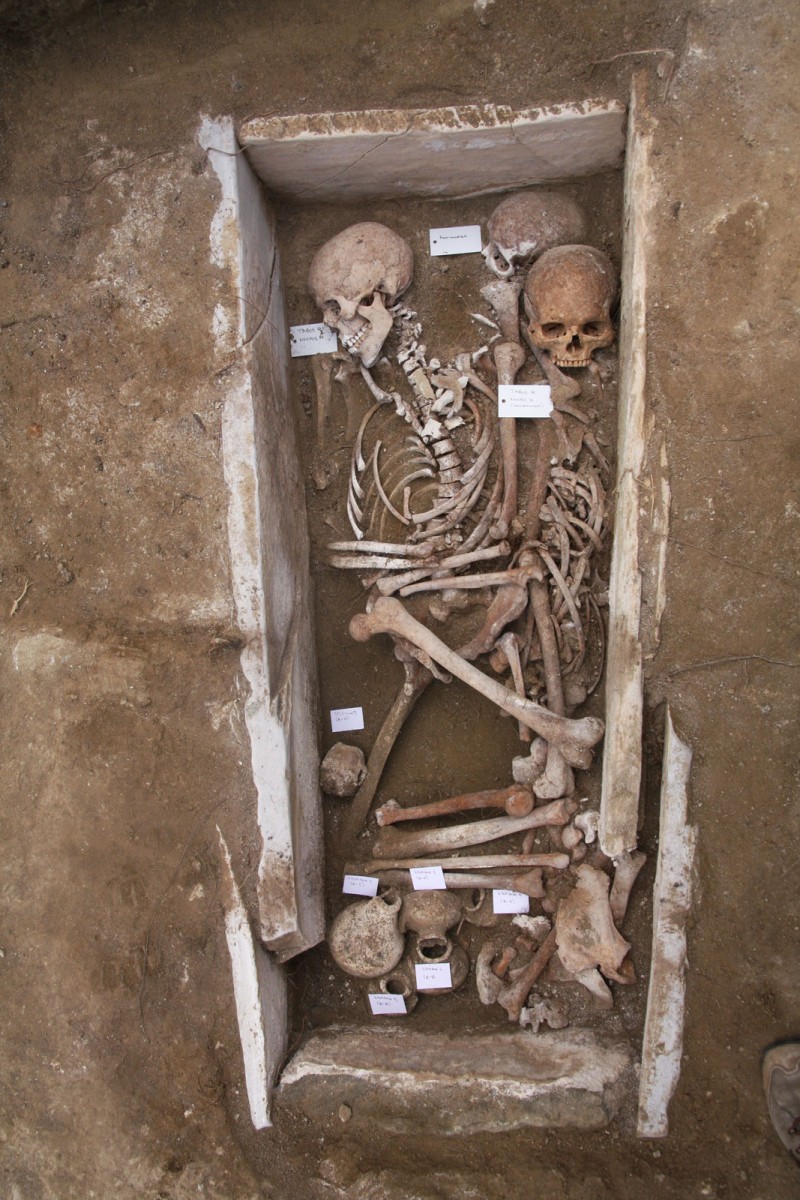 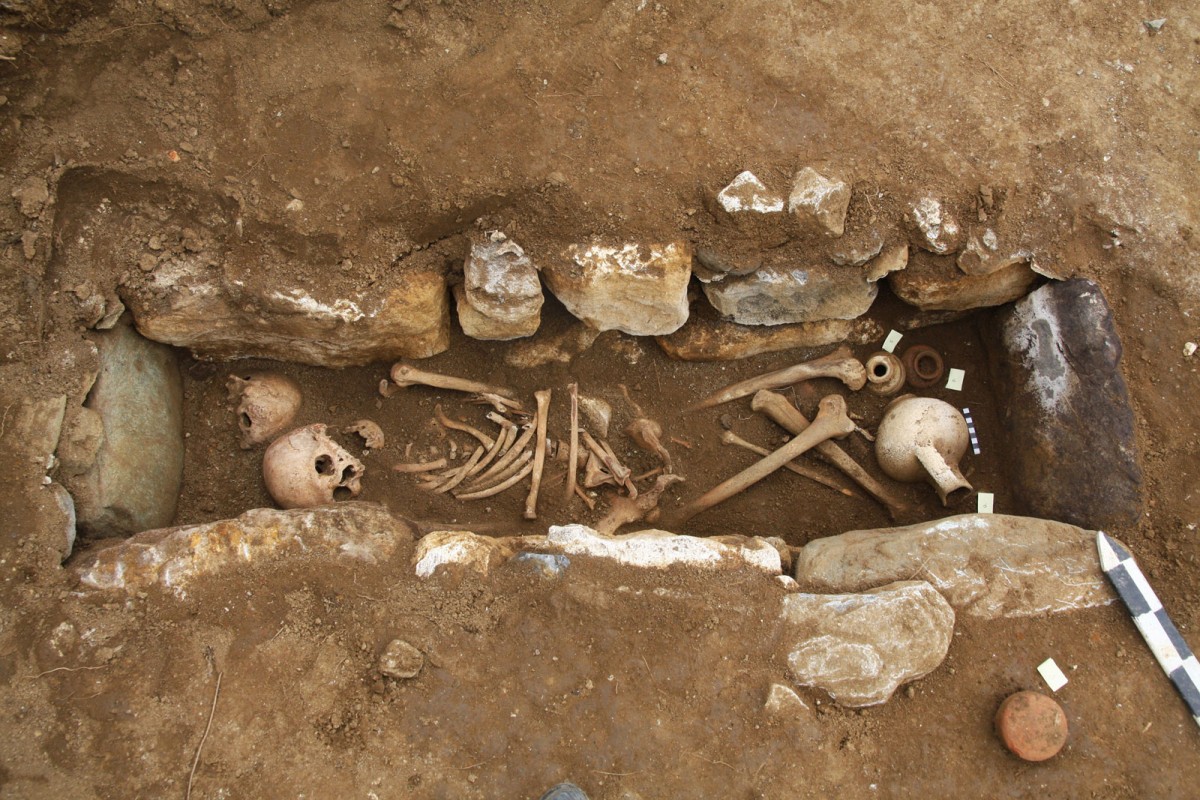 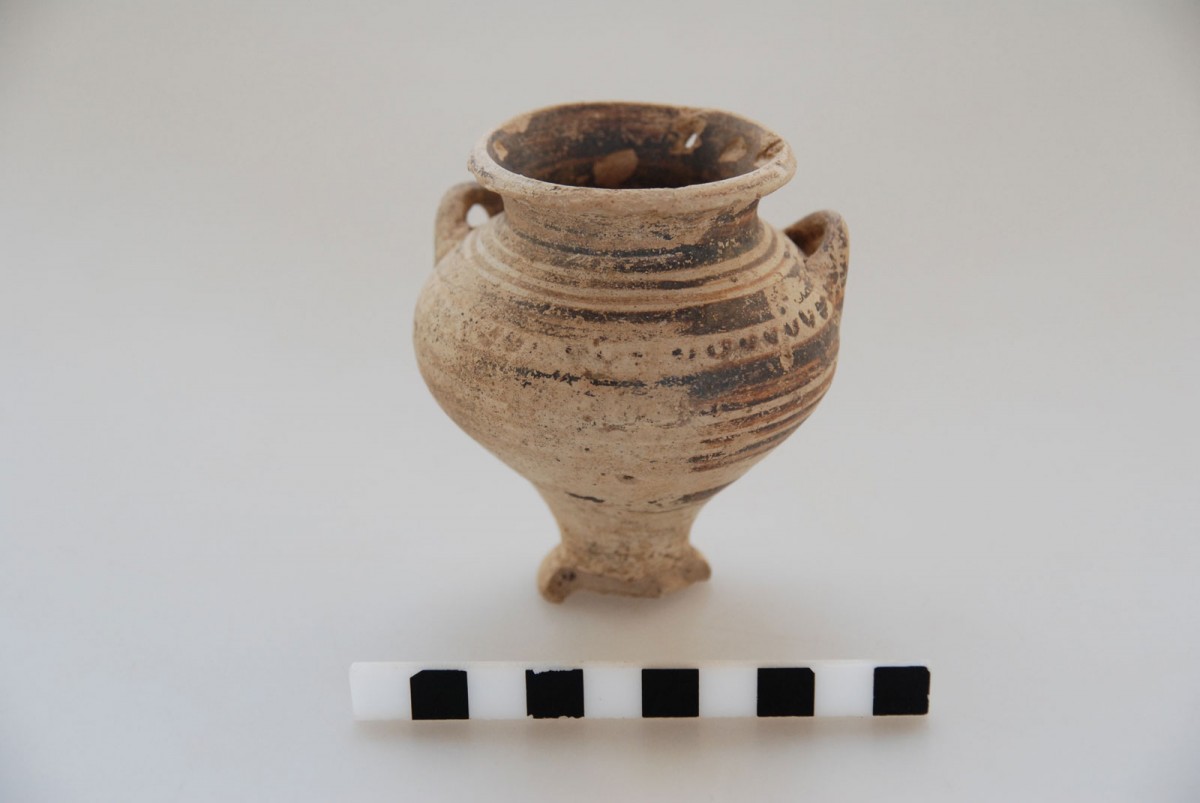 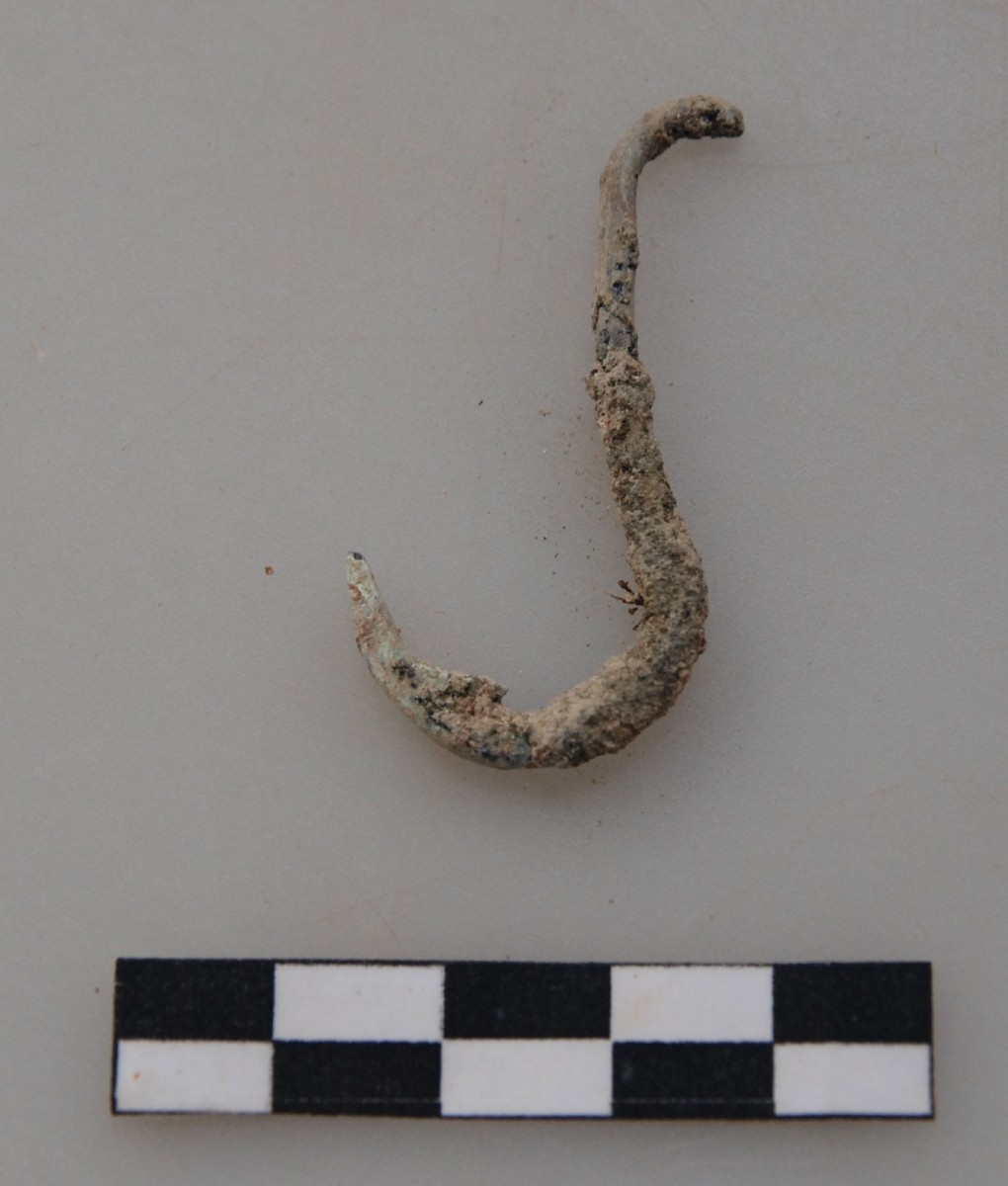 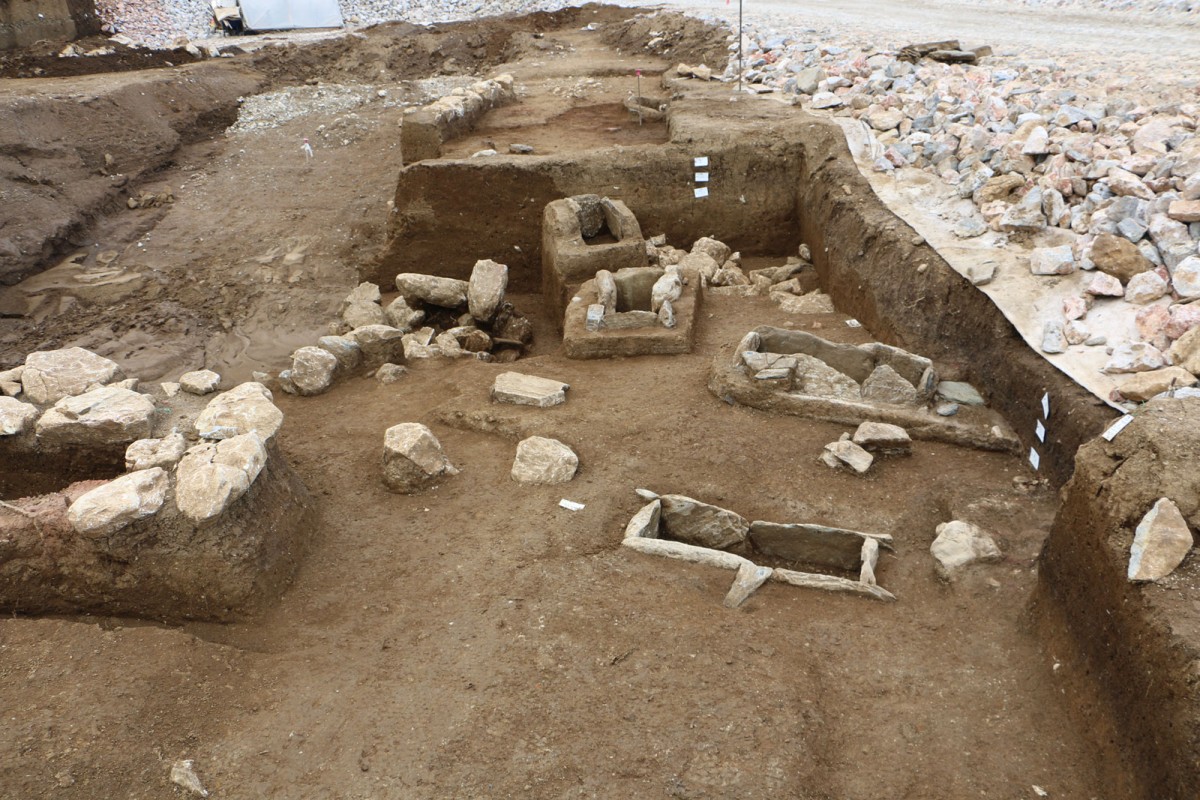 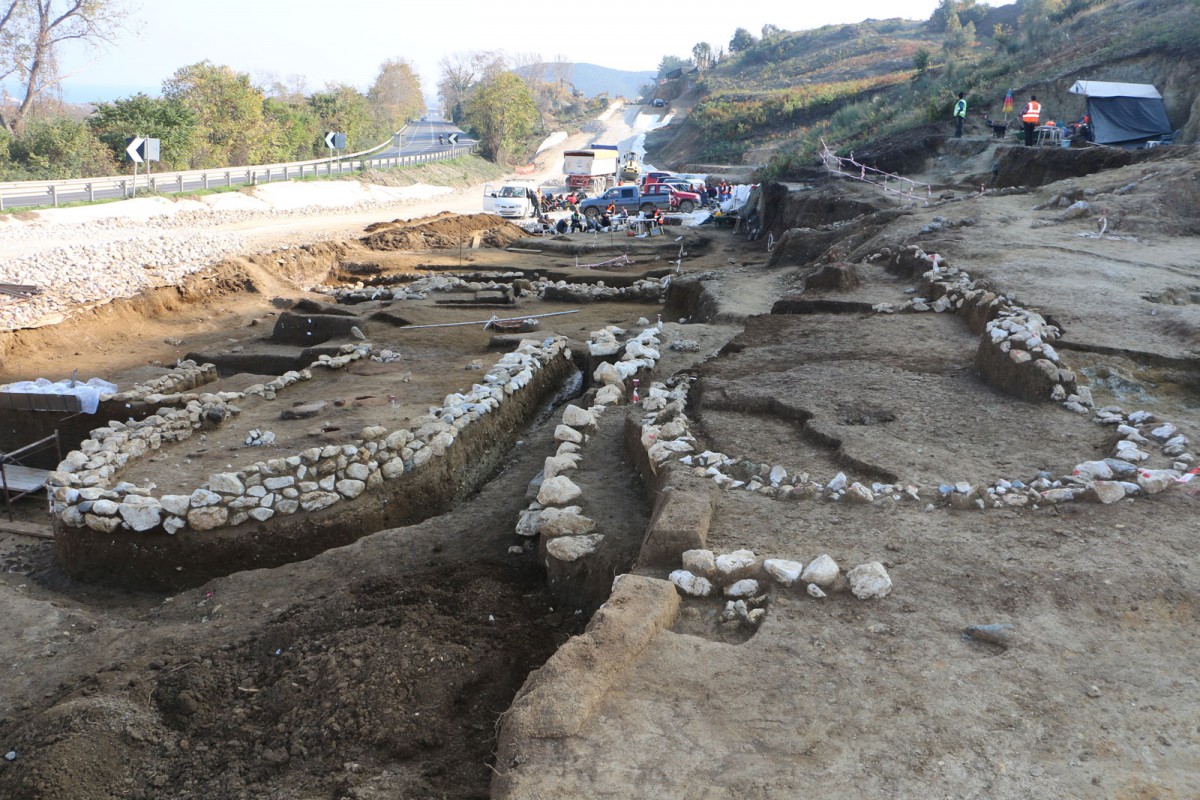 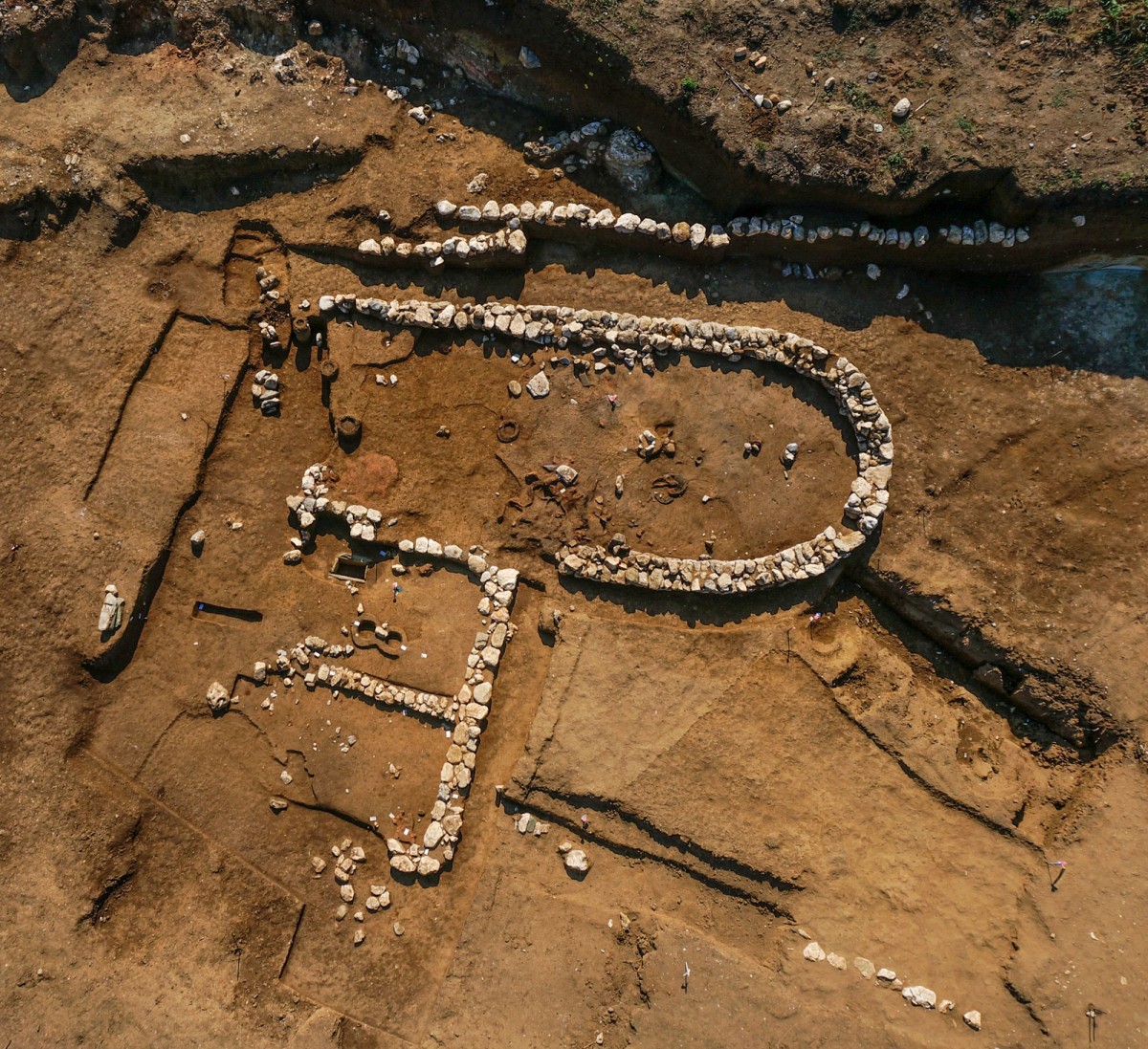 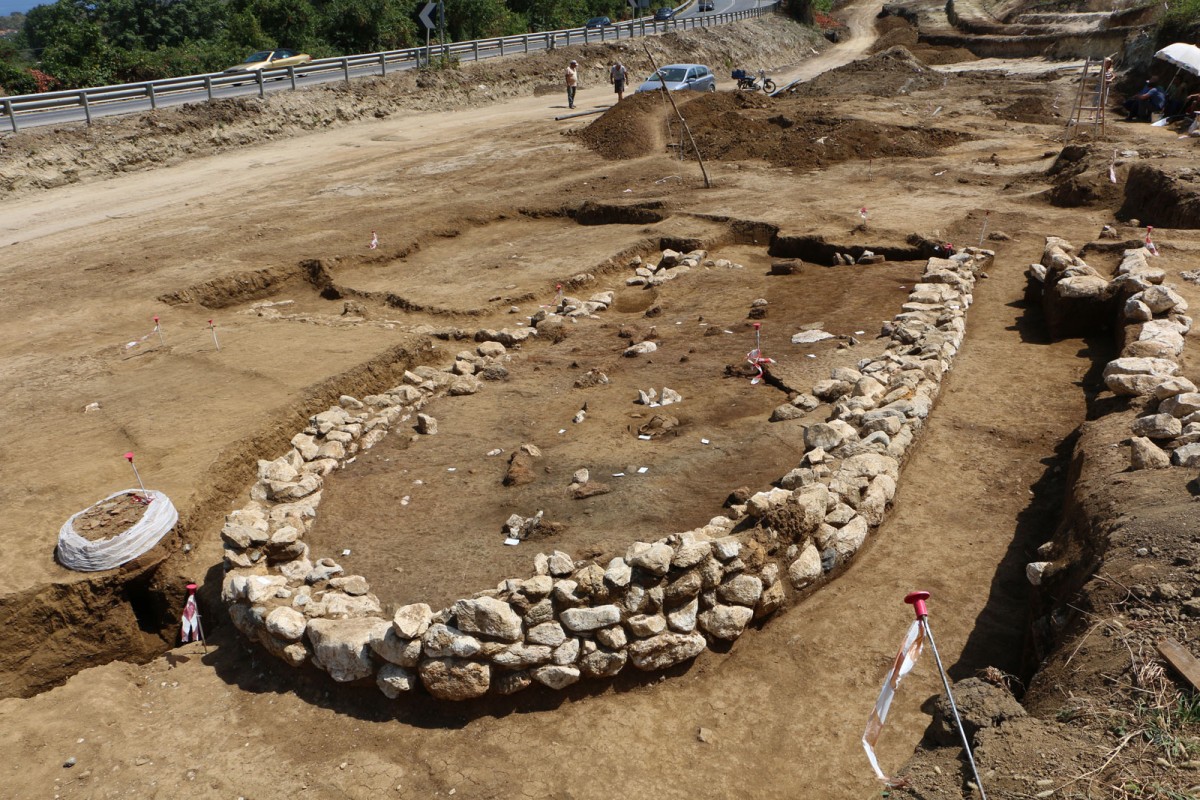 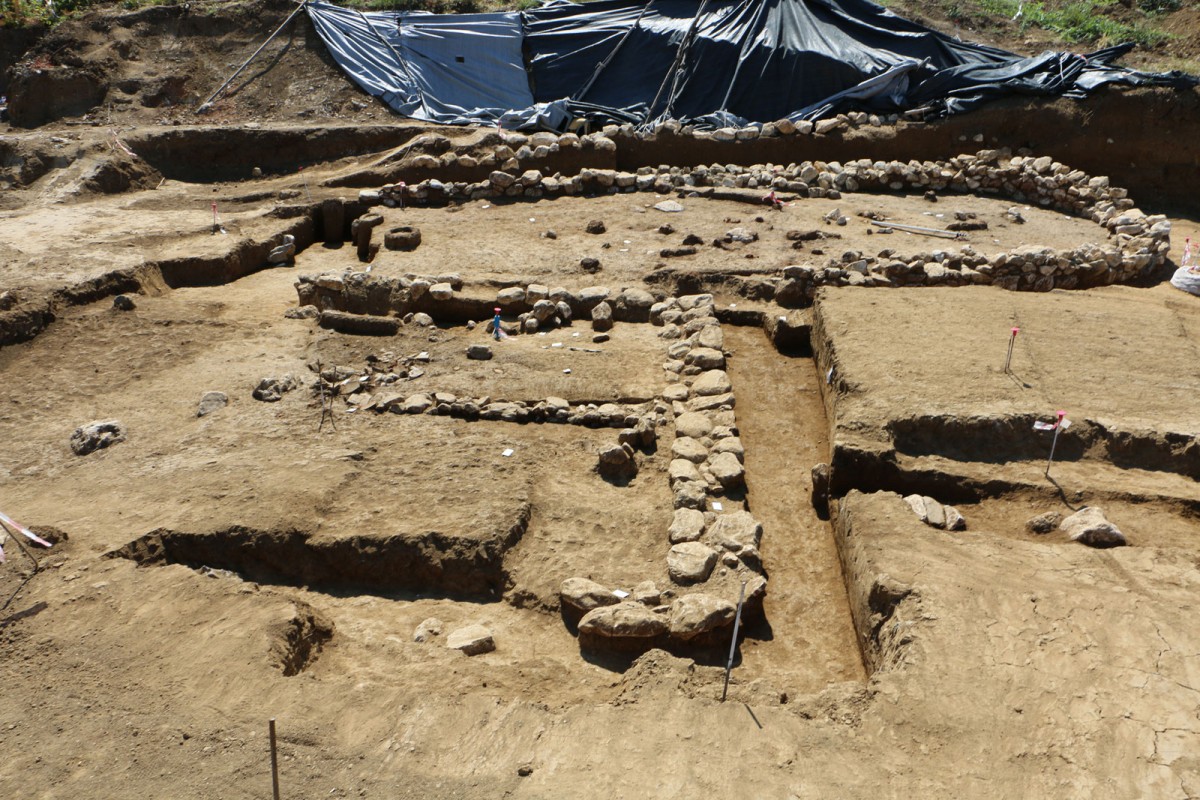 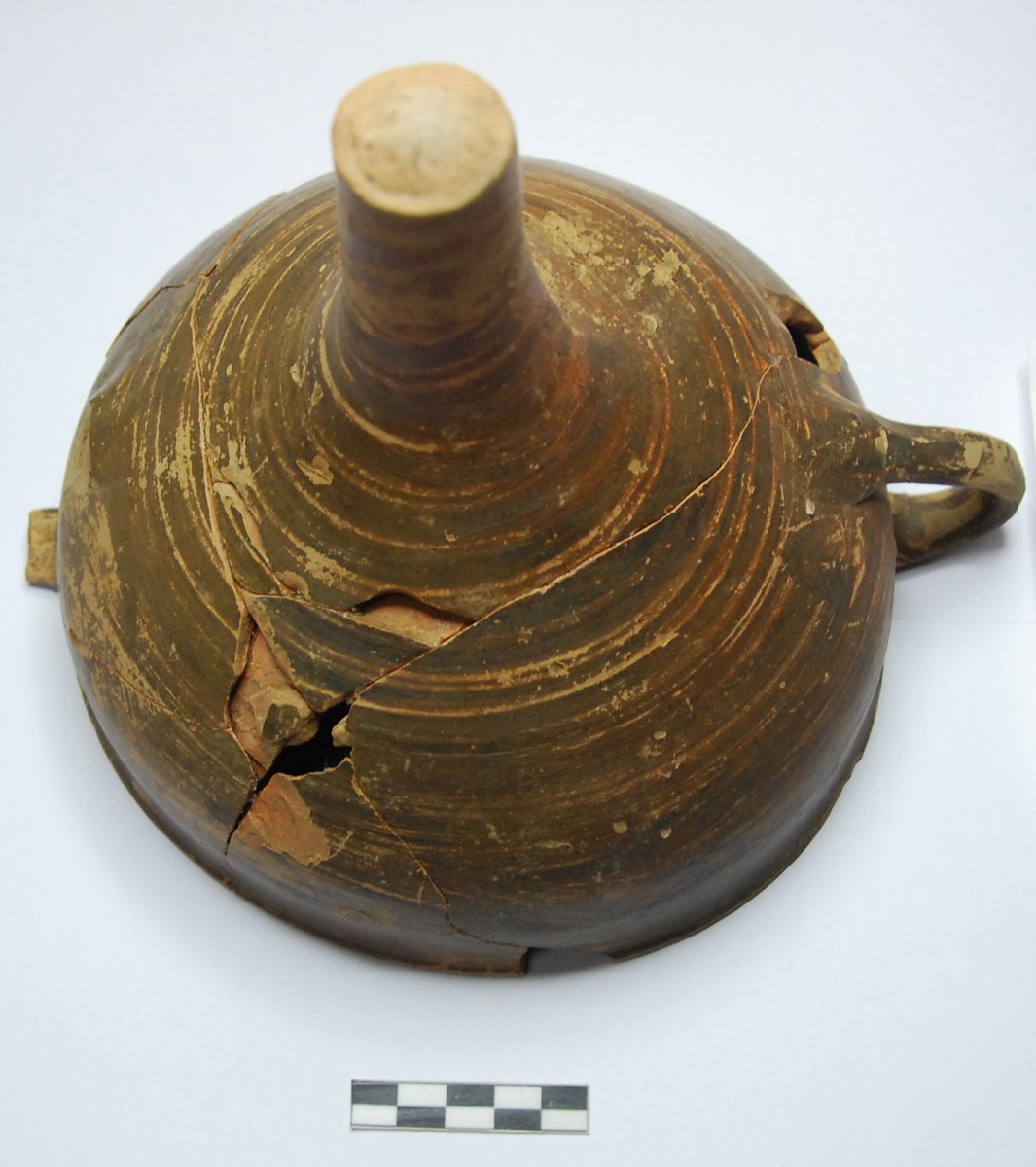 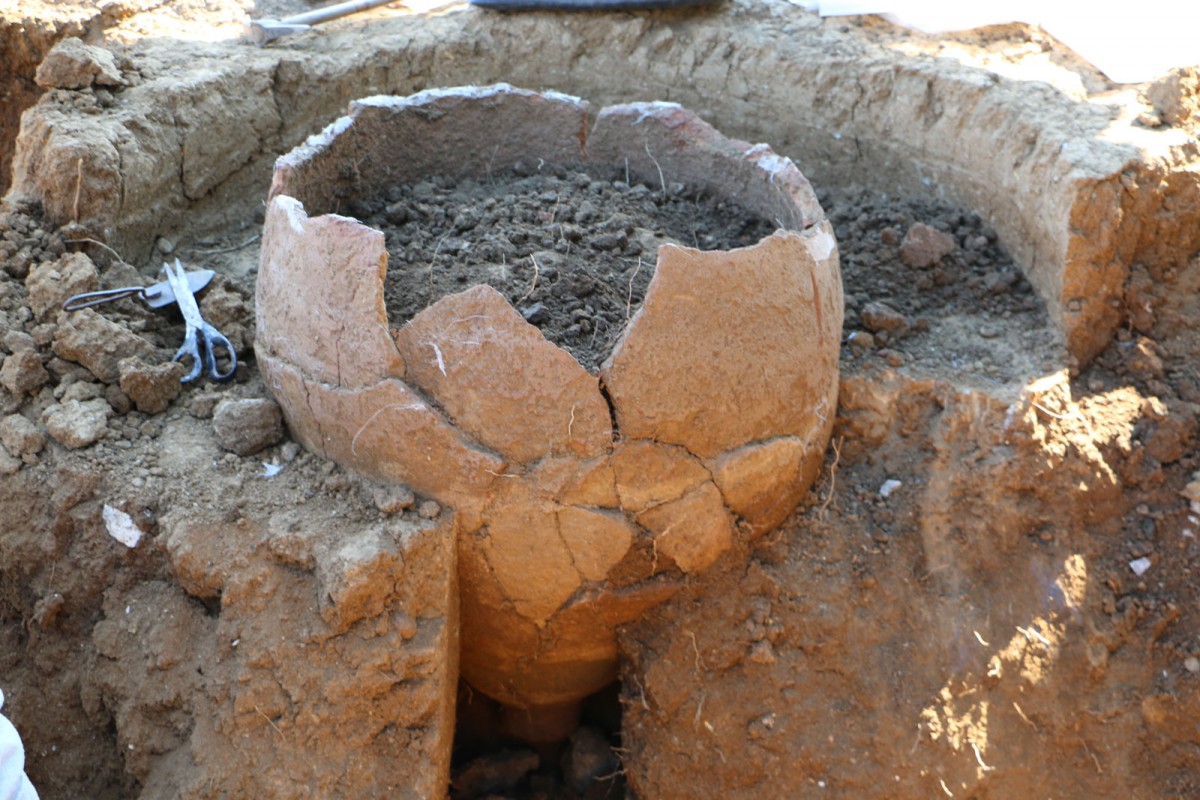 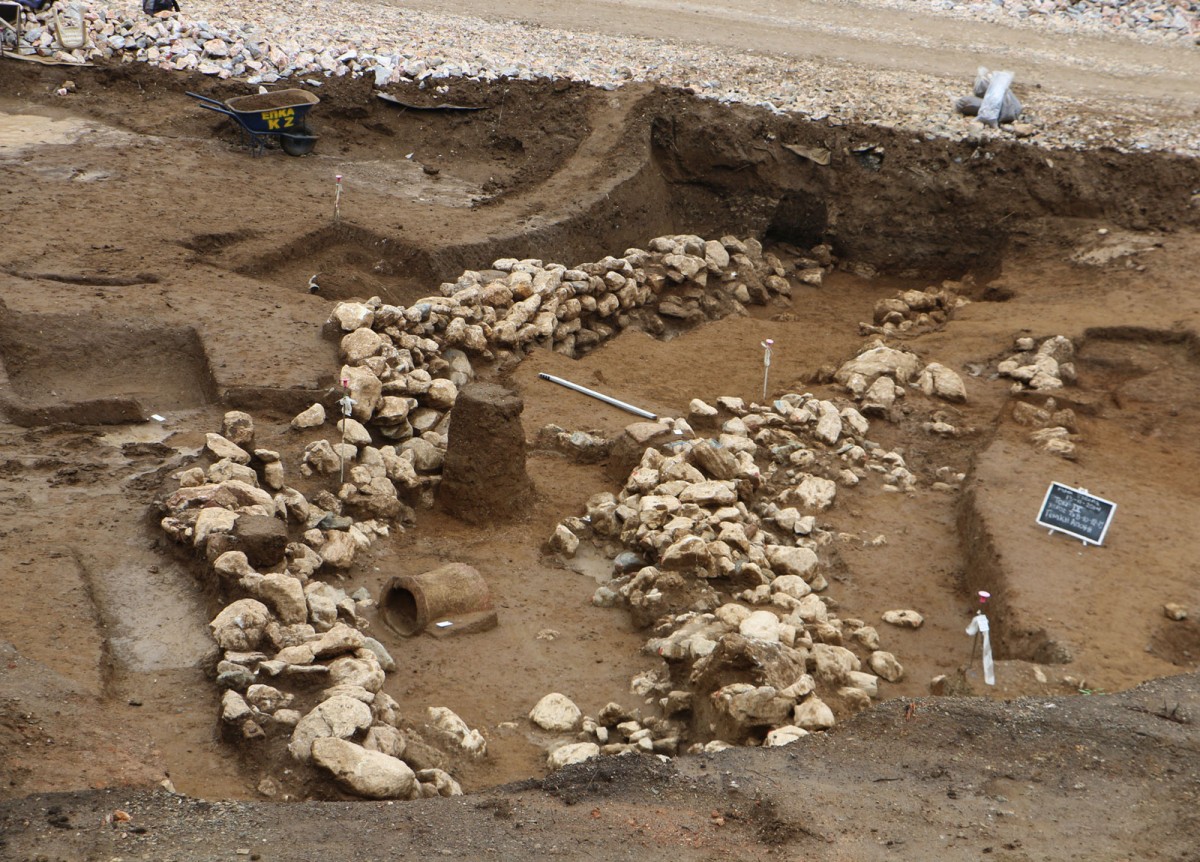 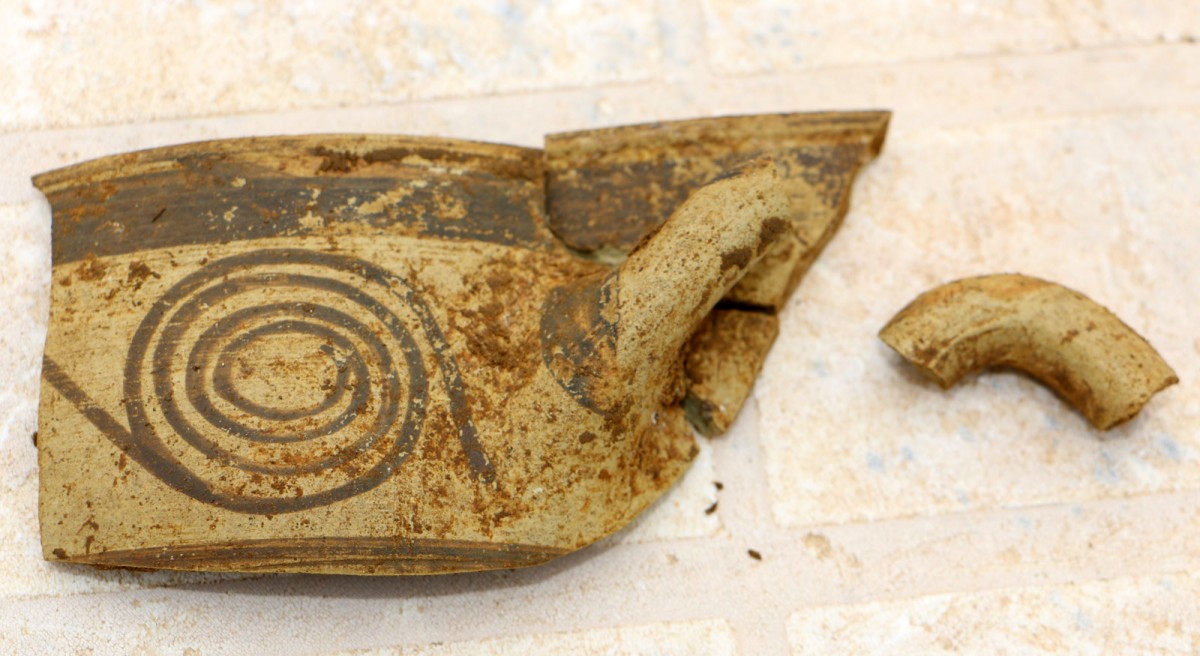 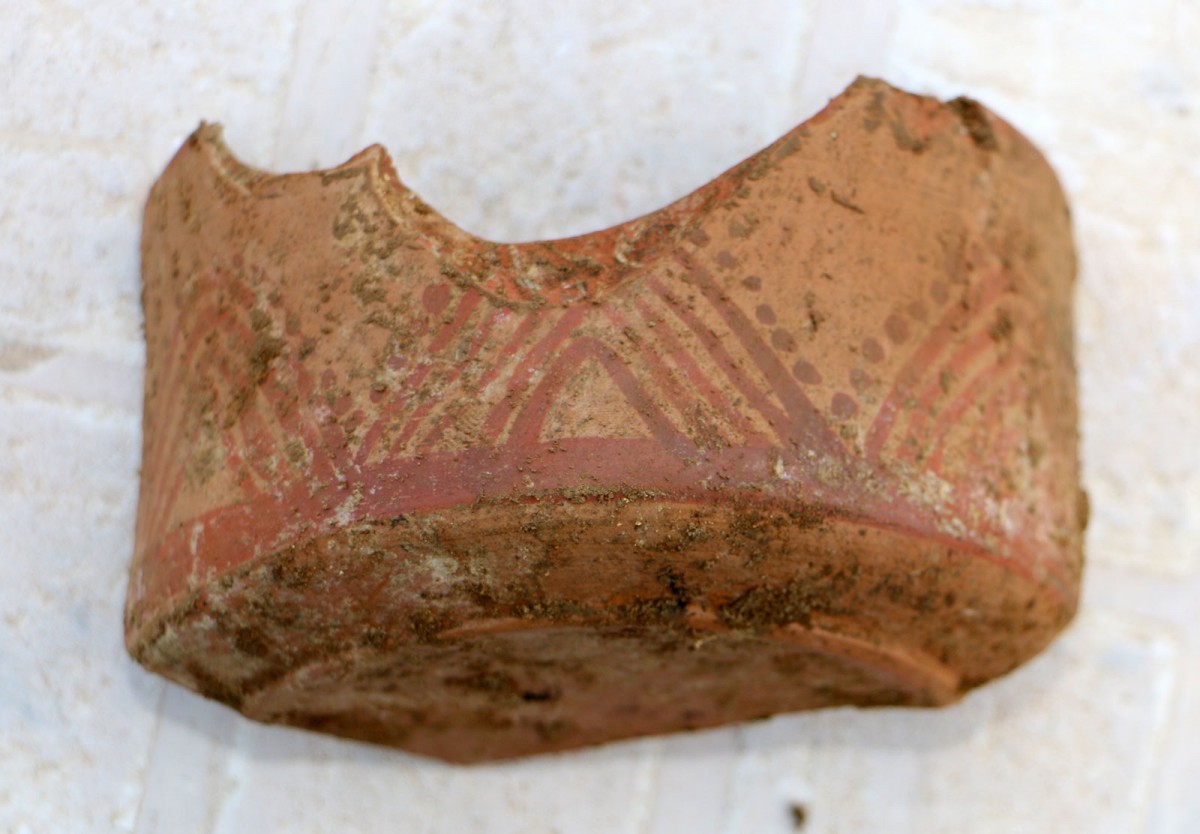 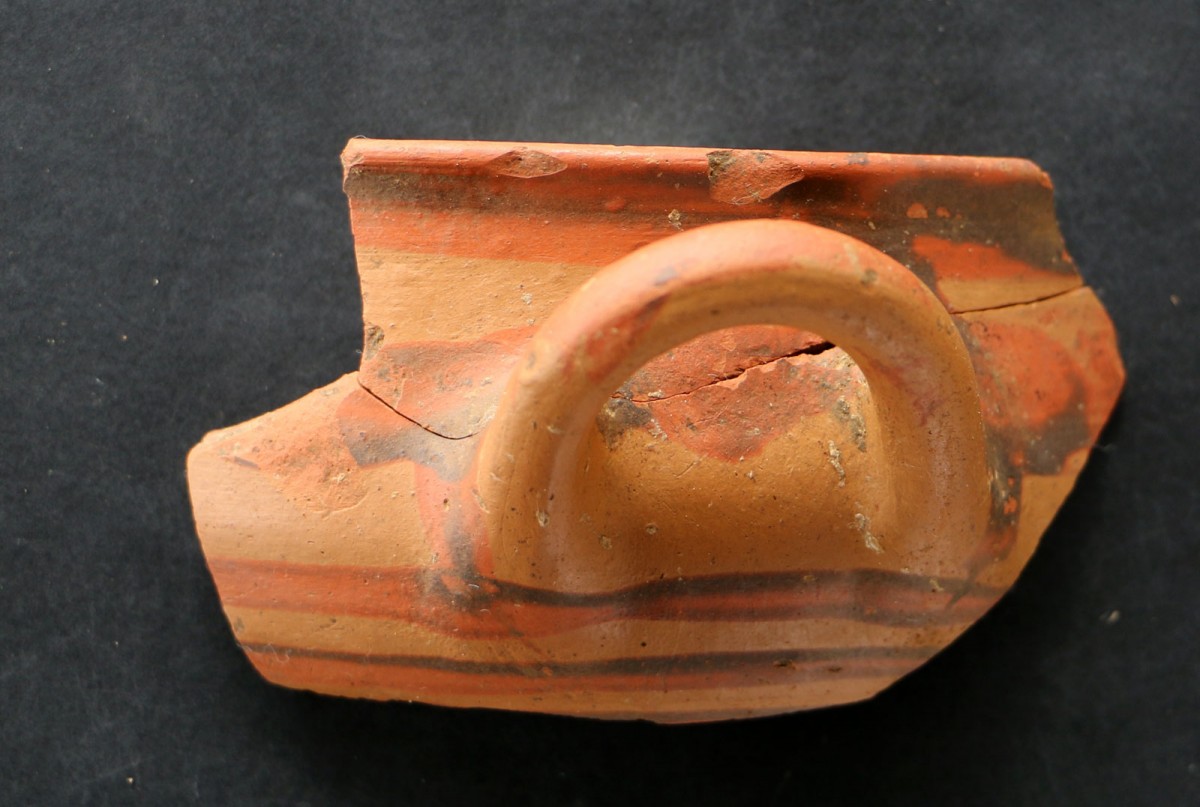 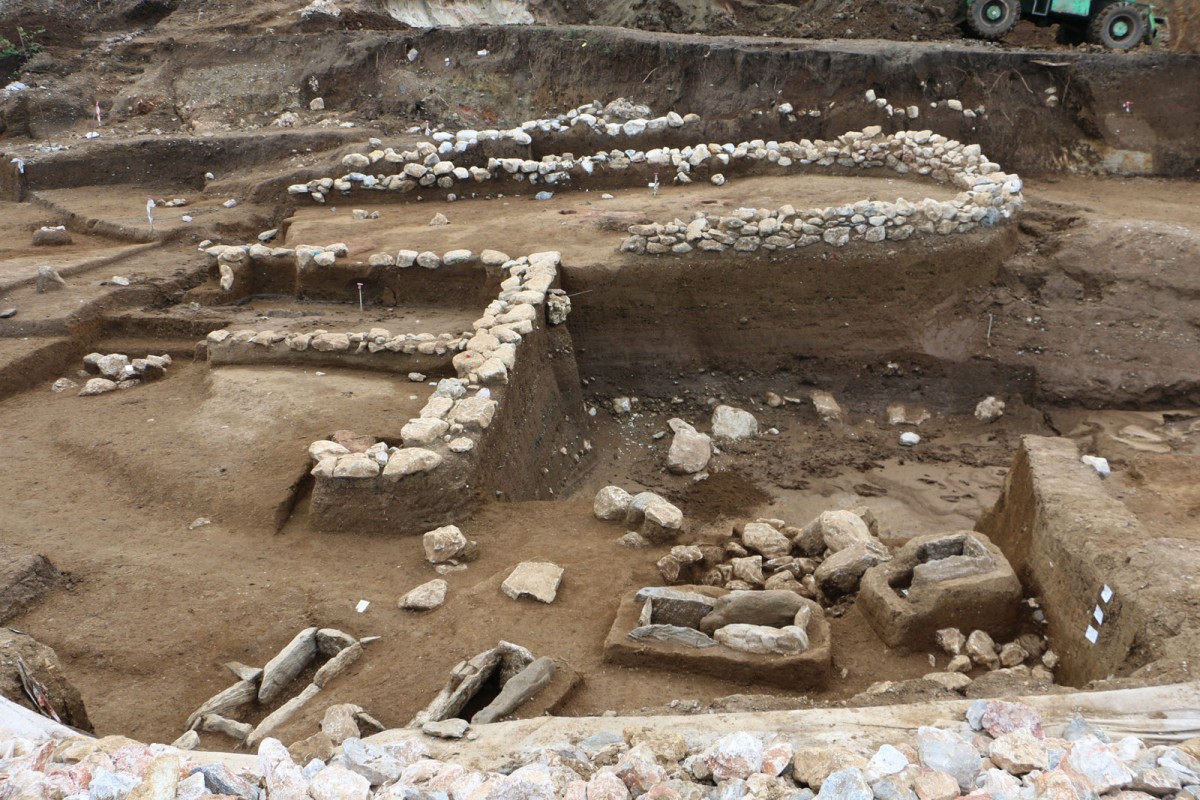 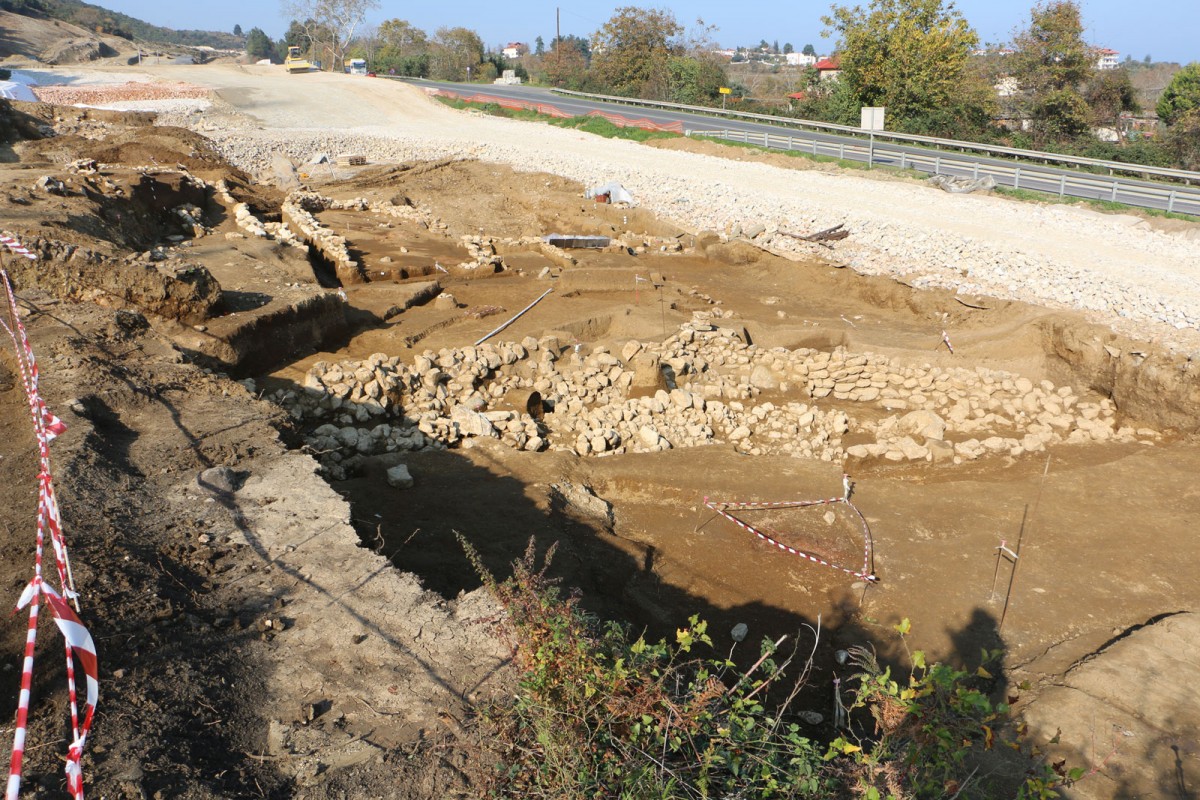 Cemetery and settlement with apsidal buildings

The rescue excavation conducted by the Ephorate of Antiquities of Pieria at the site “Rema Xydias”, in Platamonas (Pieria), in the framework of a new national road construction has recently brought to light a Late Bronze Age cemetery and a settlement.

As explained in the announcement by Sofia Koulidou, archaeologist at the Ephorate of Antiquities of Pierie: The site had been initially used as a cemetery, where until now 19 cist graves have been revealed (fig. 1-3). Several of them contained rich grave goods, such as vessels (handmade and wheel-made, of Mycenaean style), bronze rings, bone beads, clay spindle whorls and loom weights, bronze knives, a seal stone etc. (fig. 4-5). Some of the graves were small, and probably contained child burials (fig. 6).

After its use as a burial ground, perhaps even parallel to it, structures were raised at the same site, which now are being revealed by archaeologists: two apsidal buildings (fig. 7a) and monumental walls (precincts?) which probably marked off the settlement (fig. 7b). Regarding the first apsidal building its stone foundations are preserved. It is 10m long (fig. 8-9). Its superstructure must have been made of mud-bricks, traces of which were preserved in its destruction layer. While being in use, the apsidal building was expanded by another structure of rectangular groundplan with a partition (fig. 10). In the interior of the buildings the postholes of the posts supporting the roof were found. Also, traces of clay constructions, a plethora of Mycenaean style handmade and wheel-made vessels, stone and clay artefacts were revealed (fig. 11). In the surrounding area two pithoi were found in situ (fig. 12). A second apsidal building was revealed next to the first one. It is also preserved to the level of its foundations.

South of these buildings, at a distance of just a few meters, two monumental walls, or precincts, came to light. The use of these structures remains unidentified. The walls are connected to an abundance of fine wheel-made, Mycenaean style pottery (figs. 13-17) and fragments of pithoi.

The apsidal type of building (house?) dates to the Middle Bronze Age (beginning of the 2nd millennium BC) and hasn’t been located until now in the area of Mount Olympus in Macedonia. The building in Xydias probably represents a local survival of the type until the Late Bronze Age, a time when in the known settlements of mainland Greece the rectangular oblong building (“mansion”) dominates.

The two buildings at Xydias are rare examples of settlement architecture in an area where Late Bronze Age settlement remains are scarce. In addition to that, their correlation with an abundance of Mycenaean style pottery confirms once more the integration of the area in the Thessalian-Euboian cultural context. The findings reveal information about life and death of the Late Bronze Age in the area.

The new discoveries offer a great opportunity for the study of social structures during a period (beginning of the Late Bronze Age – mid-2nd millennium BC), where settlement architecture reflects the gradual formation of social hierarchy – compared to the Middle Helladic period, where no distinct social differentiation is noticed. Moreover, if the apsidal buildings prove to correlate to the cist graves (fig. 18), archaeologists will be able to draw important conclusions about the burial practices of the mid-2nd millennium BC.

The first apsidal building with its annex will be transferred to the archaeological park of Leibethra.