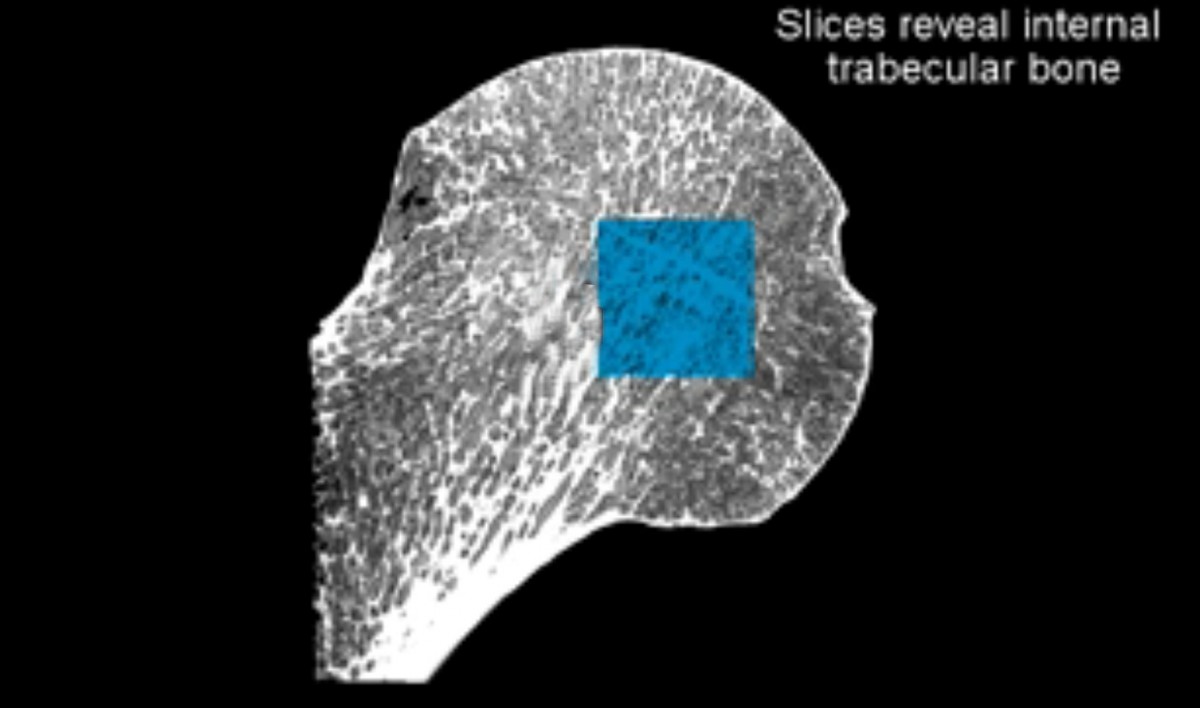 Latest analysis of prehistoric bones show there is no anatomical reason why a person born today could not develop the skeletal strength of a prehistoric forager or a modern orangutan. Findings support the idea that activity throughout life is the key to building bone strength and preventing osteoporosis risk in later years, say researchers.

New research across thousands of years of human evolution shows that our skeletons have become much lighter and more fragile since the invention of agriculture – a result of our increasingly sedentary lifestyles as we shifted from foraging to farming.

The new study, published today in the journal PNAS, shows that, while human hunter-gatherers from around 7,000 years ago had bones comparable in strength to modern orangutans, farmers from the same area over 6,000 years later had significantly lighter and weaker bones that would have been more susceptible to breaking.

Bone mass was around 20% higher in the foragers – the equivalent to what an average person would lose after three months of weightlessness in space.

After ruling out diet differences and changes in body size as possible causes, researchers have concluded that reductions in physical activity are the root cause of degradation in human bone strength across millennia. It is a trend that is reaching dangerous levels, they say, as people do less with their bodies today than ever before.

Researchers believe the findings support the idea that exercise rather than diet is the key to preventing heightened fracture risk and conditions such as osteoporosis in later life: more exercise in early life results in a higher peak of bone strength around the age of 30, meaning the inevitable weakening of bones with age is less detrimental.

There is, in fact, no anatomical reason why a person born today could not achieve the bone strength of an orangutan or early human forager, say researchers; but even the most physically active people alive are unlikely to be loading bones with enough frequent and intense stress to allow for the increased bone strength seen in the ‘peak point’ of traditional hunter-gatherers and non-human primate bones.

“Contemporary humans live in a cultural and technological milieu incompatible with our evolutionary adaptations. There’s seven million years of hominid evolution geared towards action and physical activity for survival, but it’s only in the last say 50 to 100 years that we’ve been so sedentary – dangerously so,” said co-author Dr Colin Shaw from the University of Cambridge’s Phenotypic Adaptability, Variation and Evolution (PAVE) Research Group.

“Sitting in a car or in front of a desk is not what we have evolved to do.”

The researchers x-rayed samples of human femur bones from the archaeological record, along with femora from other primate species, focusing on the inside of the femoral head: the ball at the top of the femur which fits into the pelvis to form the hip joint, one of the most load-bearing bone connections in the body.

Two types of tissue form bone: the cortical or ‘hard’ bone shell coating the outside, and the trabecular or ‘spongy’ bone: the honeycomb-like mesh encased within cortical shell that allows flexibility but is also vulnerable to fracture.

The researchers analysed the trabecular bone from the femoral head of four distinct archaeological human populations representing mobile hunter-gatherers and sedentary agriculturalists, all found in the same area of the US state of Illinois (and likely to be genetically similar as a consequence).

The trabecular structure is very similar in all populations, with one notable exception: within the mesh, hunter-gatherers have a much higher amount of actual bone relative to air.

“Trabecular bone has much greater plasticity than other bone, changing shape and direction depending on the loads imposed on it; it can change structure from being pin or rod-like to much thicker, almost plate-like. In the hunter-gatherer bones, everything was thickened,” said Shaw.

This thickening is the result of constant loading on the bone from physical activity as hunter-gatherers roamed the landscape seeking sustenance. This fierce exertion would result in minor damage that caused the bone mesh to grow back ever stronger and thicker throughout life – building to a ‘peak point’ of bone strength which counter-balanced the deterioration of bones with age.

Shaw believes there are valuable lessons to be learnt from the skeletons of our prehistoric predecessors. “You can absolutely morph even your bones so that they deal with stress and strain more effectively. Hip fractures, for example, don’t have to happen simply because you get older if you build your bone strength up earlier in life, so that as you age it never drops below that level where fractures can easily occur.”

Other theories for humans evolving a lighter, more fragile skeleton include changes in diet or selection for a more efficient, lighter skeleton, which was never reversed.

While the initial switch to farming did cause a dip in human health due to monoculture diets that lacked variety, the populations tested were unaffected by this window in history. “Of course we need a level of calcium to maintain bone heath, but beyond that level excess calcium isn’t necessary,” said Shaw.

The research also counters the theory that, at some point in human evolution, our bones just became lighter – perhaps because there wasn’t enough food to support a denser skeleton. “If that was true, human skeletons would be entirely distinct from other living primates. We’ve shown that hunter-gatherers fall right in line with primates of a similar body size. Modern human skeletons are not systemically fragile; we are not constrained by our anatomy.”

“The fact is, we’re human, we can be as strong as an orangutan – we’re just not, because we are not challenging our bones with enough loading, predisposing us to have weaker bones so that, as we age, situations arise where bones are breaking when, previously, they would not have” Shaw said.

While the 7,000-year-old foragers had vastly stronger bones than the 700-year-old farmers, Shaw says that neither competes with even earlier hominids from around 150,000 years ago. “Something is going on in the distant past to create bone strength that outguns anything in the last 10,000 years.”

The next step for Shaw and colleagues will be to provide insight into the kind of mobility that gave our ancient ancestors such powerful physical strength.