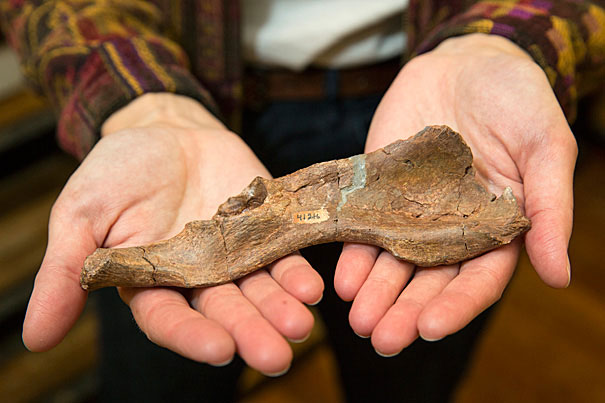 Researchers say after the discovery of a Siva's Ape hip bone

The fossilized, about 6 inches long hip bone of an ape called Sivapithecus is raising a host of new questions about whether the upright body plan of apes may have evolved multiple times.

“What we do know is that the evolution of the orthograde pattern in apes is not a simple story,” noted Michèle Morgan, curator of osteology and paleoanthropology at Harvard’s Peabody Museum of Archaeology and Ethnology and co-author of the paper “A partial hominoid innominate from the Miocene of Pakistan: Description and preliminary analyses”, published in PNAS.

Although scientists have long recognized the upright posture exhibited by chimpanzees, gorillas, and humans as a key feature separating the “great apes” from other primates, several aspects regarding the evolution of that posture hadn’t been answered: particularly how and when it emerged.

Until now scientists believed that the upright posture evolved only once, along with other features as the broad torso and the mobile forelimbs. The recent discovery of a fossilized hipbone belonging to the Siva’s Ape or Sivapithecus questions this belief.

As the researchers explain in their paper “The living apes share a number of important morphological similarities of torso and limbs; torsos are broad and shallow, lumbar regions short, and forelimbs adapted to mobility. For more than a century it was assumed that most of these similarities are homologous, reflecting descent from a common ancestor with these features. As the ape fossil record slowly expands, the story becomes more complicated, particularly in the case of the south Asian Miocene ape Sivapithecus. Sivapithecus has facial features resembling specifically the living orangutan, but no postcranial features resembling orangutans. This newly described hipbone differs from that of all living apes. Either postcranial similarities of apes are not fully homologous or the facial similarities of Sivapithecus and orangutans cannot be homologous.”

“We always thought if we found this body part, that it would show some of the features we find in the living great apes,” Morgan said. “To find something like this was surprising.”

“We initially believed that Sivapithecus, with a narrow torso, was on the orangutan line, but if that is the case, then the great ape body shape would have had to evolve at least twice,” she added. “There are a lot of questions that this fossil raises, and we don’t have good answers for them yet. What we do know is that the evolution of the orthograde body plan in apes is not a simple story.”

What Sivapithecus may ultimately demonstrate, said Flynn, assistant director of the American School of Prehistoric Research at the Peabody Museum, is that evolution doesn’t occur in a straight line, but happens as a mosaic across many species.

“What this speaks to is a rich tree with a lot of branches,” Flynn said. “There are not just one or two branches that reach back into the Miocene (epoch). It’s a very rich and complex tree.

“I think we sometimes take the easy route of trying to understand these fossils based on creatures we find today,” Flynn said. “But what we’re finding out time and again is these 10- or 12- or 15-million-year-old creatures were their own entities. Today is not always a very good model for the past.”