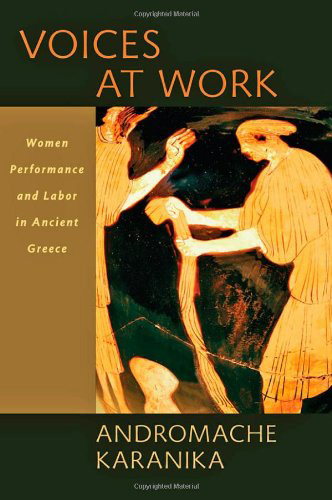 Voices at Work: Women, Performance, and Labor in Ancient Greece

In ancient Greece, women’s daily lives were occupied by various forms of labor. These experiences of work have largely been forgotten. Andromache Karanika has examined Greek poetry for depictions of women working and has discovered evidence of their lamentations and work songs. Voices at Work explores the complex relationships between ancient Greek poetry, the female poetic voice, and the practices and rituals surrounding women’s labor in the ancient world.

The poetic voice is closely tied to women’s domestic and agricultural labor. Weaving, for example, was both a common form of female labor and a practice referred to for understanding the craft of poetry. Textile and agricultural production involved storytelling, singing, and poetry. Everyday labor employed — beyond its socioeconomic function— the power of poetic creation.

Karanika starts with the assumption that there are certain forms of poetic expression and performance in the ancient world which are distinctively female. She considers these to be markers of a female “voice” in ancient Greek poetry and presents a number of case studies: Calypso and Circe sing while they weave; in Odyssey 6 a washing scene captures female performances. Both of these instances are examples of the female voice filtered into the fabric of the epic.

Karanika brings to the surface the words of women who informed the oral tradition from which Greek epic poetry emerged. In other words, she gives a voice to silence.