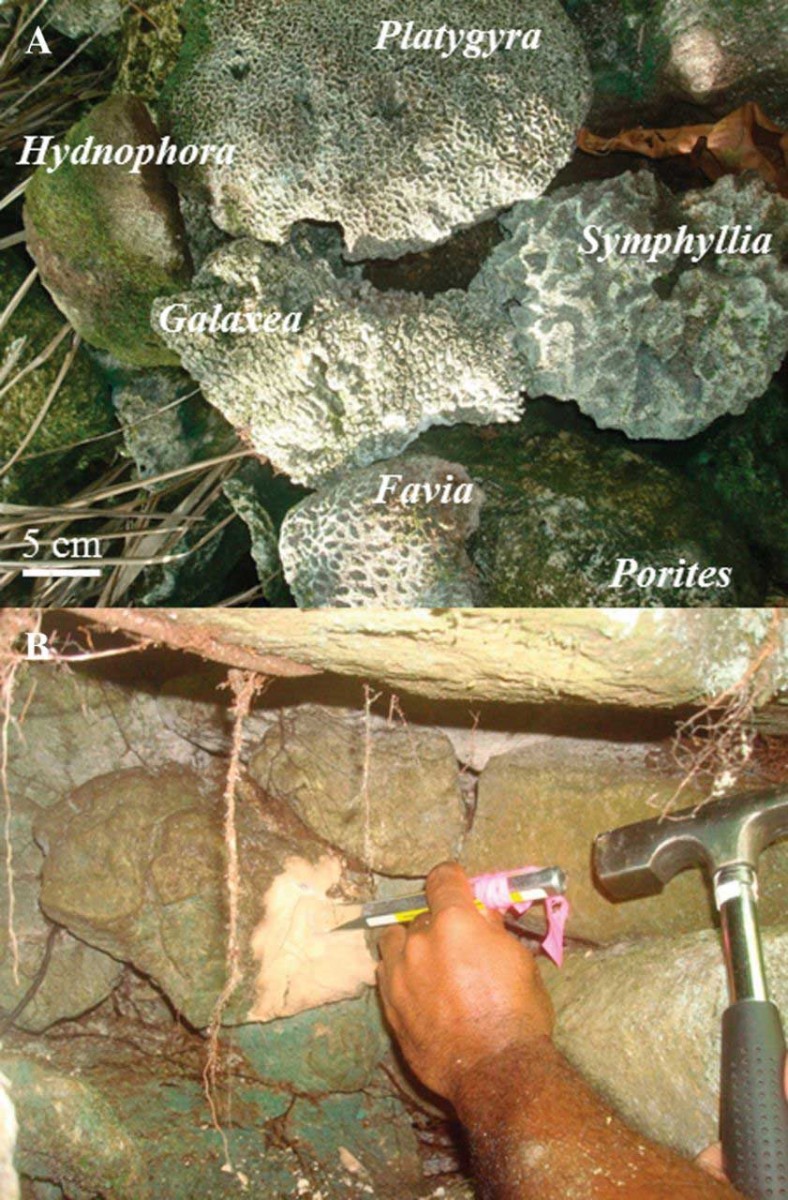 On a prehistoric Micronesian island

Dr Richards and an international team of scientists investigated the ages of corals used in the construction of sacred tombs that interred royalty on the Pacific Island of Kosrae.

“Most ancient tombs are made of hard, non-living components such as limestone, granite or clay, but the ruins of the ancient city of Leluh on Kosrae contain several royal tombs that, uniquely, contain coral in their construction,” Dr Richards said.

“Because coral is a living organism we were able to use high-precision thermal dating techniques to determine the age of the corals we found, and that showed the tombs were built in the 1300s, the first one in about 1310.”

Unlike other, more famous pyramid mortuary structures that have an apex and are permanently sealed, like the ancient pyramids of Giza, the tombs of Leluh are truncated – that is, they contain a rectangular base that rises like a pyramid but don’t have a pointed top, meaning that the central crypt is accessible from above.

Dr Richards said it’s believed the Leluh tombs were used as temporary processing points for dead kings and high-status individuals – it was a place where the corpse, anointed with coconut oil and bound in mats and coloured cords, would have been interred for up to three months. A house would have been erected over the top where senior officials would have made offerings. After this period of mourning, the royal bones were exhumed, cleaned, re-bound and then buried in a deep hole on a nearby reef.

“Determining the age of the coral doesn’t just date the tombs more accurately, it gives us information about what was once a thriving capital city,” she said.

“At its peak, Leluh supported a complex hierarchical society that was home to 1500 people including kings, chiefs and commoners. The extensive use of coral in the tombs, estimated to contain more than 12,000 individual colonies, as well as the wider city would have required a highly structured social order that could organise and demand significant labour and logistical support from the local population.”

Legend has it that the coral was taken from the surrounding shallow reef and that people ‘formed a long chain across the reef and passed pieces of coral from hand to hand’. The ancient city of Leluh fell into disrepair in the 19th century following a devastating typhoon, an increase in foreign ships, pirates and traders, and a rapid population decline due to diseases introduced by foreigners.