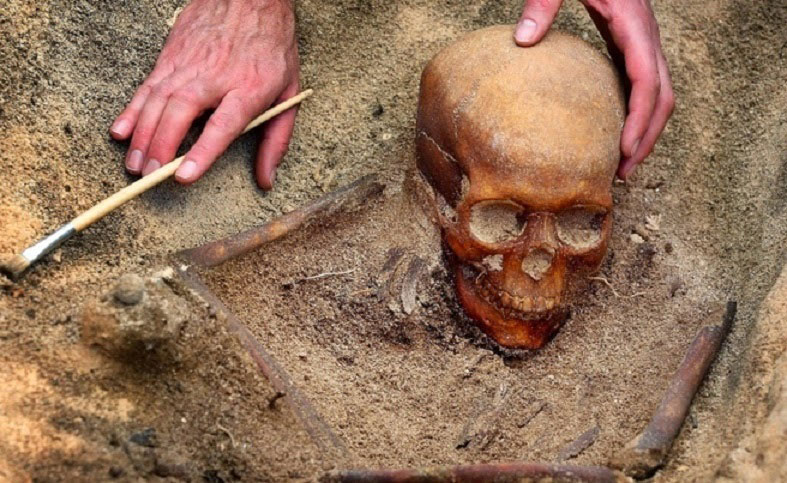 The Shipwrecks of the Roaring Forties project

One burial site containing the remains of an adolescent person was carefully excavated by the team last week. Further investigations of other sites are continuing.

“This is the first human burial to be found undisturbed through archaeological investigations, and represents a unique opportunity to reconstruct events surrounding this individual’s death and internment,” said Dr Daniel Franklin from The UWA Centre for Forensic Science.

WA Museum Head of Maritime Archaeology Jeremy Green said this information is important because it tell us about the life and times of the sailors on board Dutch East India Company ships.

“It is as much about knowing where the people came from, what their diet was, as well as how they died,” Mr Green said.

The Batavia wrecked on Morning Reef near Beacon Island in the Houtman Abrolhos in 1629.

Of about 341 people on board, most made it to nearby islands; 196 people died, most during a mutiny among the survivors, including women and children.

The wreck site was discovered in 1963 and since then, archaeological work on several of the islands has located historic material associated with the wreck, as well as human remains: a mass grave was found at Beacon Island in 1999, with excavation work taking place there in 2001.

Mr Green said there were at least two known burial sites to be studied as part of this expedition.

“Not only are those two sites of interest, but we suspect there are other graves yet to be investigated as well,” he said.

“The team of researchers is studying these areas for two weeks as part of the Australian Research Council funded project called Shipwrecks of the Roaring Forties: a maritime archaeological reassessment of some of Australia’s earliest shipwrecks.“

The WA Museum has been studying grave sites on the island since 1994.

“We are also doing further archival research to find out more about the history of the loss of the Batavia,” Mr Green said.

The Shipwrecks of the Roaring Forties project is led by UWA archaeologist Professor Alistair Paterson, and involves state, national and international partners including the WA Museum, Prospero Productions, Curtin University and Department of Fisheries.

“We are testing new methods to improve our knowledge of archaeological sites using the technical expertise of remote sensing scientists from UWA led by Professors David Lumley and Jeff Shragge,” Professor Paterson said.

Part of the project includes the creation of a virtual reality website that will allow visitors to see Beacon Island as it has stood over time, including the years it was a base for local fishers who built shacks that were only recently demolished.  The website is expected to be online later this year.