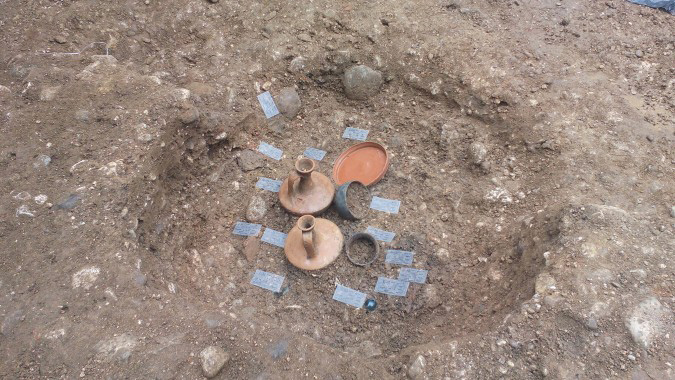 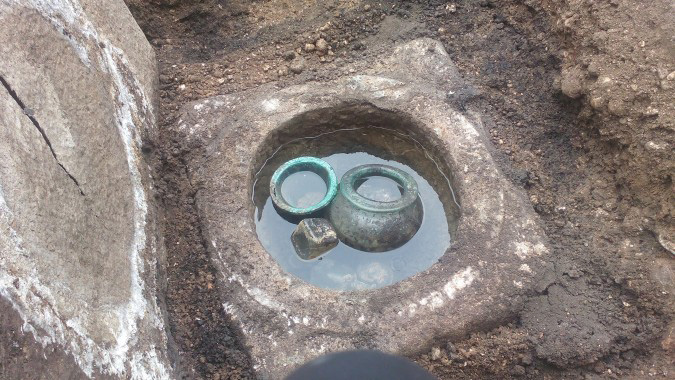 Undisturbed Roman graves in the heart of Ljubljana

They belonged to the inhabitants of Emona

Τhree undisturbed Roman graves belonging to the inhabitants of Emona from 2,000 years ago, as the graves were dated to the early 1st century, were located by archaeologists working on the Slovenska Street in the centre of Ljubljana last week (March 25).

From the three newly discovered graves one really stands out. Preserved in a stone chest, it remained unspoilt for two millennia. The archaeologists carefully opened the grave to find a glass urn containing the remains of the deceased, with glass vessels and bottles stored alongside the urn.

One of the two remaining graves is slightly more modest, containing a ceramic urn, two ceramic beakers and two glass balsamaria. Martin Horvat, head of the excavation from the Museum and Galleries of Ljubljana, explained that “Romans put these goods into the grave to help the deceased on their way to the afterlife. They also added some of the favourite objects of the deceased.”

For the media present at the site Horvat also revealed that five graves were so far found during the excavations on the Slovenska Street, while as many as 50 could be present in the area of the construction site. “Graves have only been preserved in specific spots and we can count ourselves lucky to have found these. Some were certainly destroyed during earlier constructions when people did not value these treasures yet, while some graves could still be waiting to get discovered”, Horvat also added.

The discovered graves will be unearthed and taken to museum facilities for cleaning and further processing.

Emona or Aemona was a Roman castrum, settled by colonists from the northern part of Roman Italy. Emona itself was the region’s easternmost city, although it was assumed formerly that it was part of the Pannonia or Illyricum, but archaeological findings from 2008 proved otherwise. It was located in the area where the navigable Ljubljanica came closest to Castle Hill. The river played an important role as a transport route for the trade between the city and the rest of Roman empire. From the late 4th to the late 6th century, Emona was the seat of a bishopric that had intensive contacts with the ecclesiastical circle of Milan, reflected in the architecture of the early Christian complex along Erjavec Street in present-day Ljubljana.