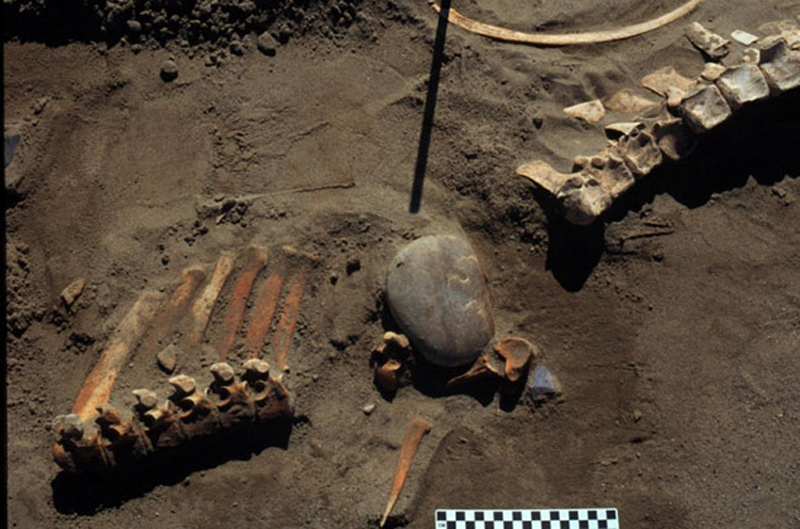 Seven horses and a camel show early hunters in Calgary 13,300 years ago

New research shows that prehistoric Ice-Age people hunted horse and camel 13,300 years ago in North America, much earlier than previously believed, according to a team of researchers led by a Texas A&M University anthropologist.

Mike Waters, who heads the Center for the Study of the First Americans at Texas A&M, and colleagues from the University of Calgary and Aarhus University in Denmark have had their work published in the current issue of PNAS (Proceedings of the National Academy of Sciences).

Waters and the research team examined the skeletal remains of seven horses and one camel found in an area called Wally’s Beach, located about 80 miles south of Calgary in Canada. The rolling prairies of Central Canada were home to numerous types of animals early hunters sought thousands of years ago. These animals were killed in a small area close to a spot where they could ford the river, Waters says.

Radiocarbon dating of the remains shows that they were killed 13,300 years ago, at least 300 years earlier than hunters were previously believed to have been in the region.

“Our study shows that these early hunters were in this area long before Clovis inhabited the region, which were once thought to be the first hunters in this part of the world,” Waters explains.

“This study adds more information about the earliest inhabitants of North America and the role human hunters played in the extinction of large mammals at the end of the last Ice-Age,” Waters says.

The team found only simple core tools and flakes at the site that were used to disarticulate the carcasses. No spear points were associated with the kill sites.