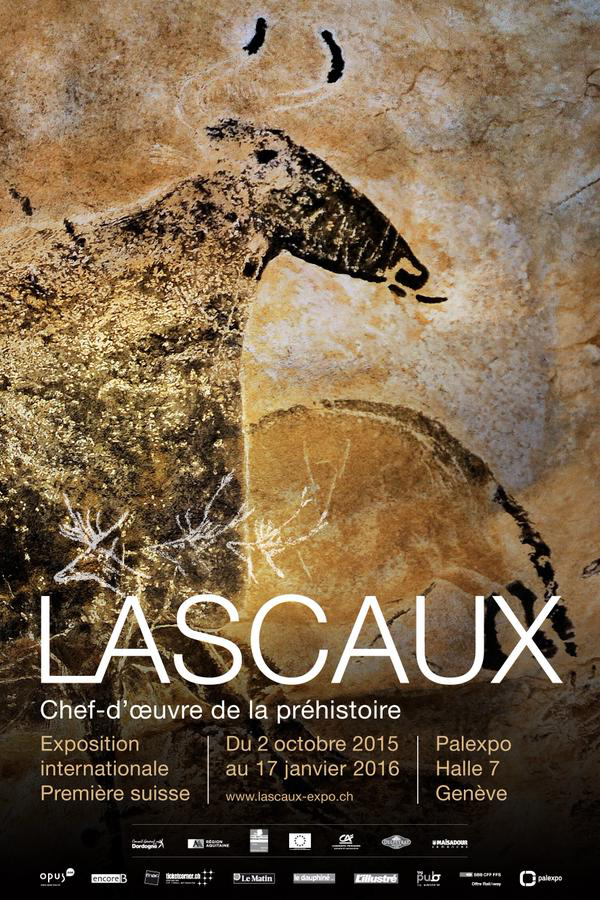 Scenes from the Stone Age

The cave paintings of Lascaux

A major exhibition dedicated to the masterpieces of Lascaux will be held this autumn in Geneva. The diversity and quality of its Palaeolithic artwork have made this cave – now a UNESCO World Heritage site – one of the most important of its kind in the world. The life-size replicas of the frescoes, specially commissioned for the touring exhibition, will allow visitors to grasp the splendour of the Lascaux cave, closed to the public since 1963. For its first installation in Switzerland, the public will be able to discover this interactive exhibition at Palexpo from 2 October 2015 to 17 January 2016. Tickets will be on sale from 26 June 2015 on the Ticketcorner and FNAC networks.

The animals represented on the walls of the cave at Lascaux are famous all over the world. Deer, horses, aurochs, bison… Their colours and mystery fascinate us and question our origins. Discovered in 1940, these wall paintings are considered to be treasures of Palaeolithic art and attracted crowds of visitors. Victim of its own success, the site in the South-West of France was closed to the public in 1963 in order to preserve the frescoes, rendered vulnerable by the passage of hundreds of thousands of visitors. UNESCO included the cave at Lascaux in its list of World Heritage sites in 1979. The General Council of Dordogne, initiators of the project Lascaux – International Exhibition, decided thirty years later to allow one of the world’s most famous decorated caves to leave its site in the Perigord and present it beyond the frontiers of France in a remarkable touring exhibition.

The exhibition will be presented for the first time in Switzerland. Reproduced in their minutest details, the life-size replicas of the paintings from this fabulous cave will reveal the secrets of the masterpieces painted by our CroMagnon ancestors nearly 200 centuries ago.

An interactive history of Lascaux

The exhibition extends over a surface of almost 4000 square meters and tells the story of the cave. It starts with the incredible adventure of the four boys who discovered Lascaux in 1940. A 3D film projected on a giant screen and models of the cave’s various galleries will help visitors to understand the structure of the underground halls. The high point of the visit: the replicas of the paintings in the Nave and the Well Scene.

The rest of the exhibition deals with the mysteries of Lascaux. Tactile screens and a film allow the public to grasp the details of the frescoes and reveal some of its secrets. On an animated wall, worldrenowned specialists, painters, scientists and philosophers, will deliver their testimonies.

The scenes represented in the exhibition are mostly taken from the Nave gallery, the longest decorated part of the cave. It houses the frieze of the ibex, visible when the wall is plunged in darkness, the Swimming Stags Frieze, whose delicate and majestic heads seem to emerge from the water, the celebrated Crossed Bison Panel, and the Black Cow frieze, whose enormous belly hides a herd of horses. The Well scene is also reproduced: it is here that the only human figure represented at Lascaux can be found, grappling with a mortally wounded bull.

All the paintings have been reproduced in their actual size, faithful in every detail to the originals. The painters used natural pigments. Using a patented technique called “stone veil”, the walls on which this amazing bestiary takes form have been reproduced in a manner that allows the recreation of the exact volumes with which humanity’s first artists worked.

The exhibition in Geneva will be further enriched by the contributions of the Natural History Museum and the Musée d’Art et d’Histoire. Visitors will thus be able to discover a Cro-Magnon camp, recreated with astonishing realism, and wonder at the prehistoric discoveries from the Veyrier site.

Voted best “Touring Exhibition of the Year” in 2013, the exhibition dedicated to the marvels of Lascaux has already won over the United States and Canada. It will be stopping in Geneva this autumn before setting out to conquer Asia.

The international exhibition Scenes from the Stone Age: The cave paintings of LASCAUX will be shown at the Palexpo Halle 7, Geneva, from 2 October 2015 to 17 January 2016.