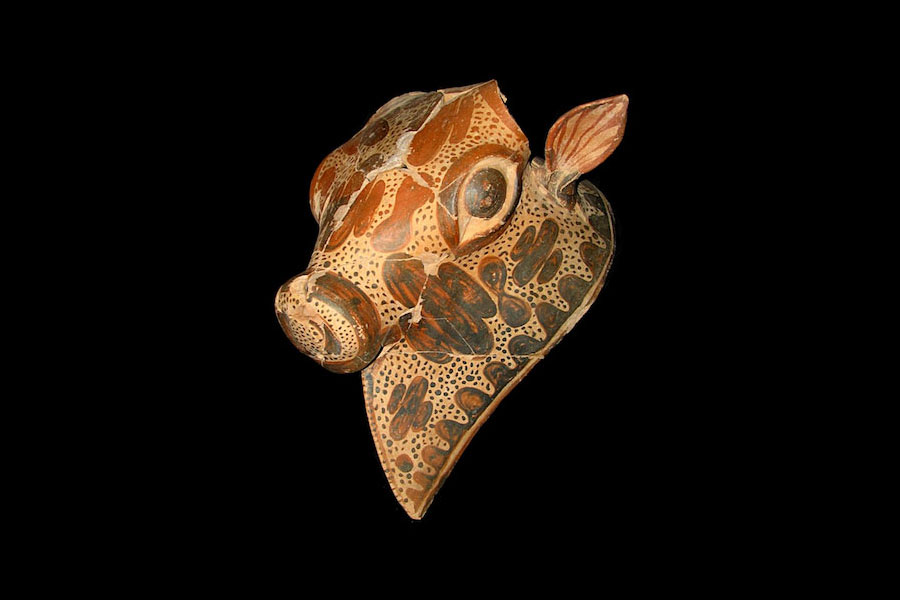 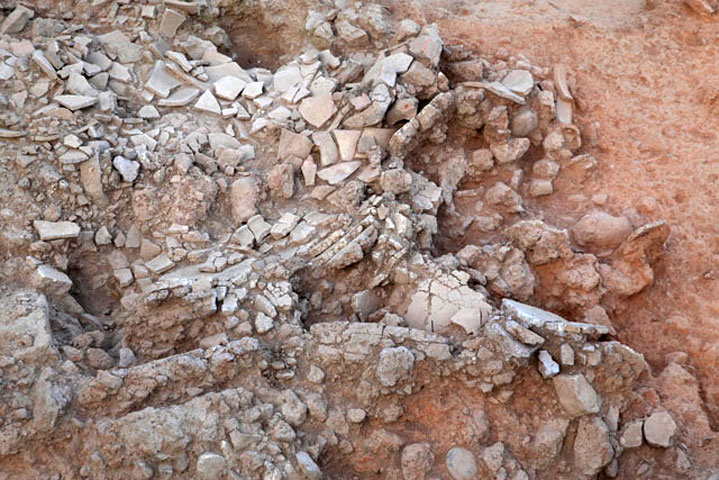 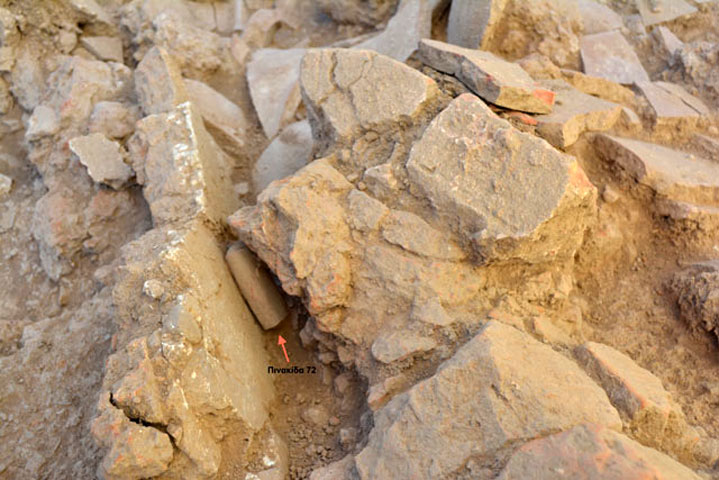 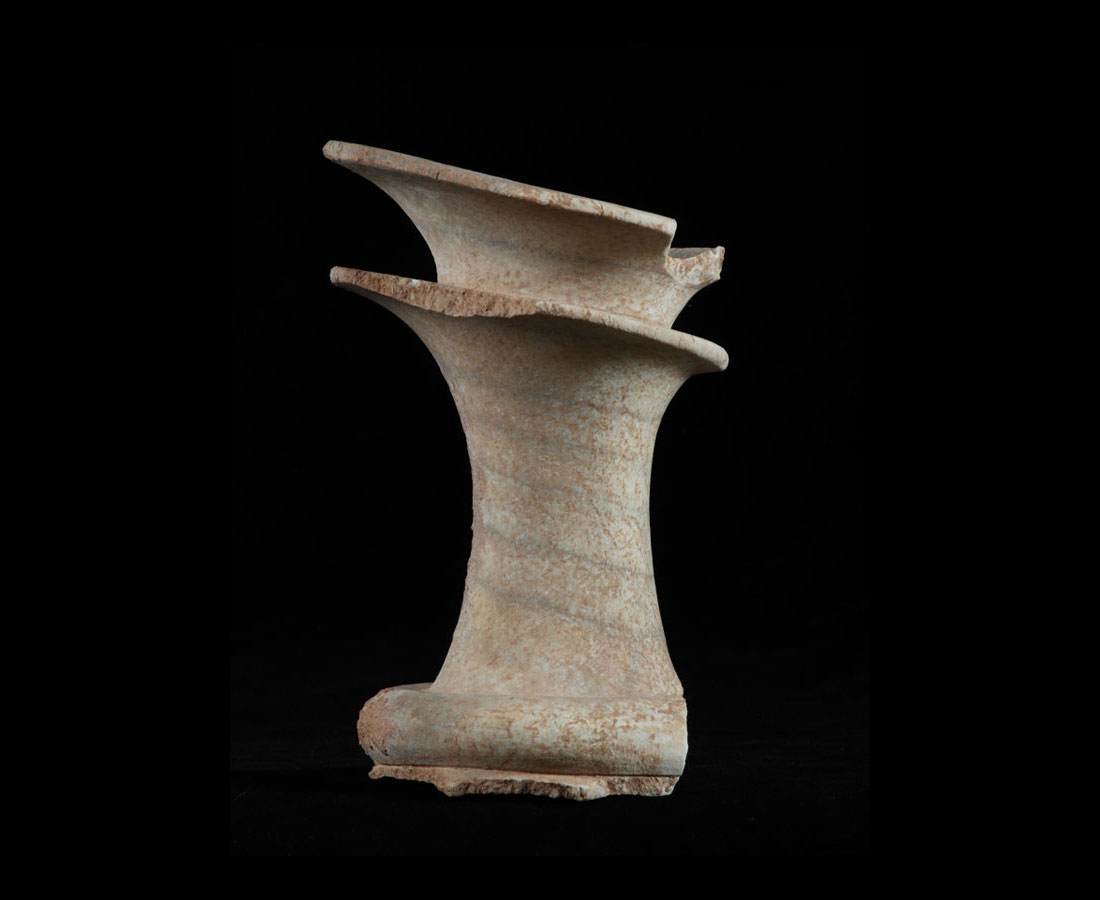 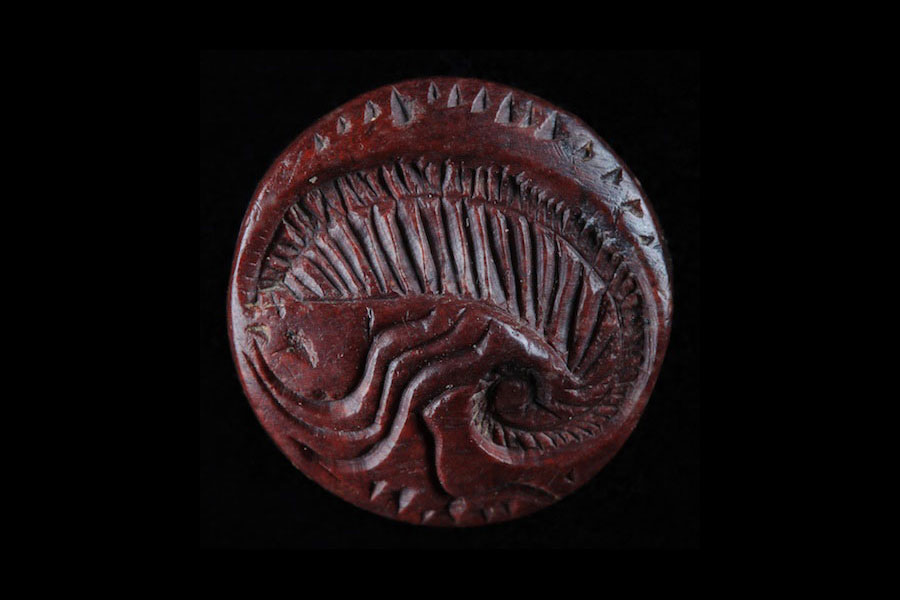 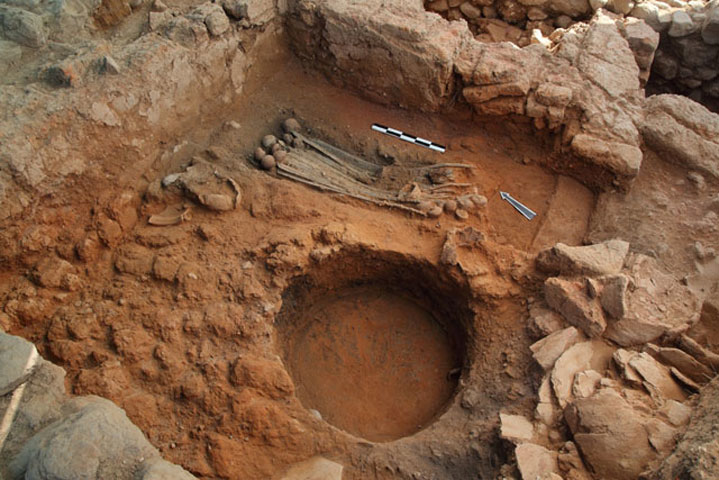 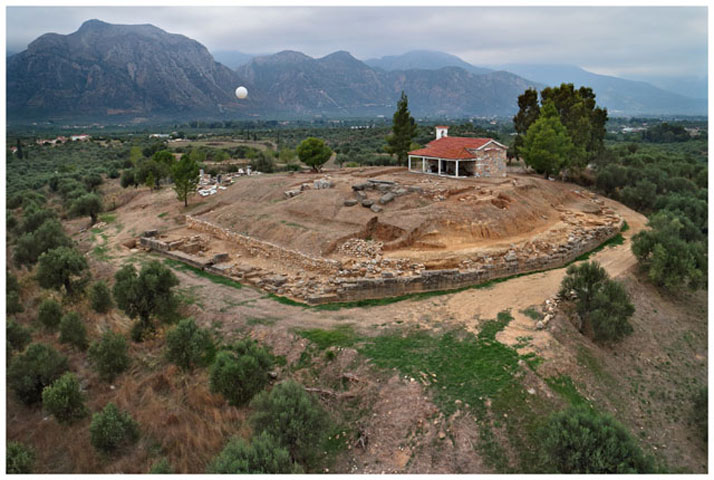 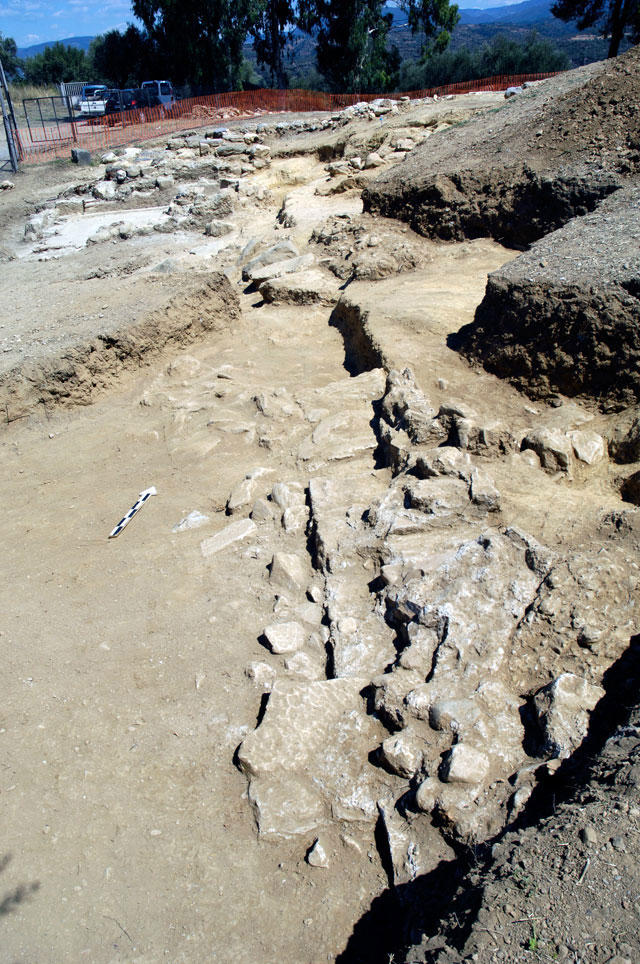 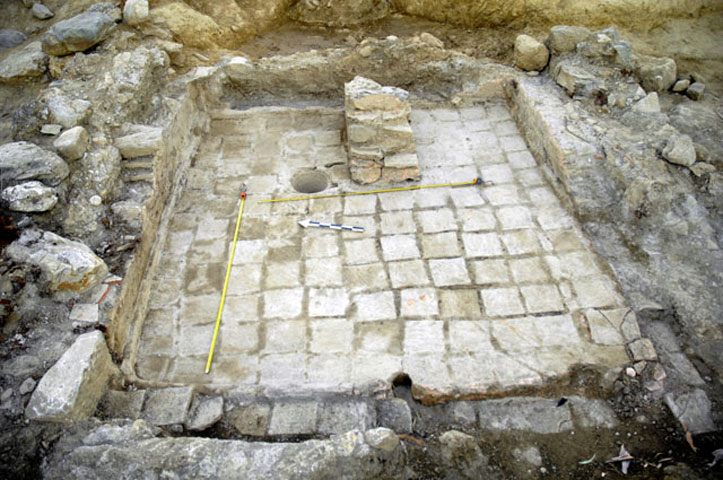 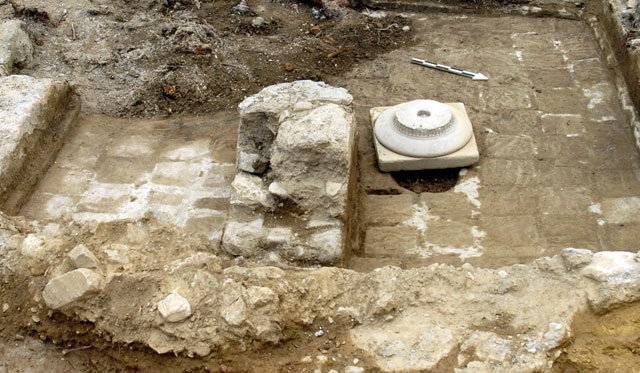 Aghios Vassilios Hill and the Sanctuary of Apollo Amyklaios

A new Mycenaean palace has been found on the Sparta plain during the archaeological surveys which have been going on since 2009 at the Aghios Vassilios Hill near the village of Xirokambi in Laconia. Among the finds were Linear B tablets, a very valuable discovery considering the fact that they come from a Protohistoric period of the Helladic area where written sources are scarce.

The Aghios Vassilios excavations are headed by the Director Emerita of Antiquities, Adamantia Vassilogamvrou and are considered to be among the most important systematic surveys in the Protohistory of the Hellenic world.

Another important ongoing excavation is that of the Sanctuary of Apollo Amyklaios on the Aghia Kyriaki Hill in Amykles of Laconia, headed by Professor Emeritus of the National and Kapodistrian University of Athens Angelos Delivorrias. There one of the most important Greek sanctuaries has been revealed, dating back to the Geometric period. The research team slowly but patiently also tries to shed light on the issue of the Apollo temple (Amyklaion Throne), which has engaged many archaeologists over the years. This survey is being conducted under difficult circumstances, as the Sanctuary has been severely damaged in the past.

The archaeological investigations conducted since 2009 at the Aghios Vassilios Hill near the village of Xirokambi in Laconia revealed a new Mycenaean palace on the Sparta plane.

By using methods of geophysical survey buried building remains have been located at an area covering 3.5 hectares.

Habitation is believed to have started during the transition period from the Middle-Helladic to the Late-Helladic/Mycenaean period (17th-16th c. BC), based on the dating of the cemetery of stone-built cist graves and simple shafts at the top of the hill. The first building phase of the settlement is also dated to the same period. According to the evidence found so far, these buildings were destroyed during the LH IIB-IIIA1 period (late 15th-early 14th c. BC), possibly due to a fire. After this, a new strong and extended palace complex was erected at the site. These buildings were arranged around a big central courtyard, on the south and western sides of which a stoa with a colonnade of pillars has been excavated.

In a room of the Western Stoa storey an archive of the palace was kept. Its excavation hasn’t been completed yet. The unbaked clay tablets carved with Linear B texts were preserved thanks to a fire which has however destroyed the new palaces during the LH IIA period (14th c. BC). The archive contains tablets of all the known types found in other palace complexes, leaf-shaped or page-shaped, labels and clay seals. The texts refer to the supply of goods to a sanctuary (or sanctuaries), male and female names, places and the title άναξ in the genitive case (άνακτος).

One of the excavated buildings on the east side of the courtyard, Building A, is being associated to cult/religious rituals. The fire has “baked” and preserved part of the brickwork and clay mortar of the inner separating walls. Until now 10 rooms have been investigated. They contained many typical cult objects and vessels, such as clay figurines of bovids and an ivory statuette of a male figure holding a young calf or bull, a big clay rhyton of a bull head, a stone double-rimmed jug, two big Tritons etc. Furthermore, many decorative objects, seal stones, Egyptian scarabs etc. have been found. In one room, possibly laid in a box made of organic material, 21 Bronze swords were kept, while underneath the floor of another room a dense layer of animal bones, pottery and valuable miniature objects was found. This layer might be related to the fire remains located in the surrounding area, on the eastern side of the building.

The abundance of wall-painting sherds depicting typical Mycenaean era scenes found in the backfill of a second building (Building B) and in a deposit in an unbuilt area suggest that the palaces were decorated with frescoes.

The Aghios Vassilios palace complex offers a unique opportunity for archaeologists to investigate the creation and development of a Mycenaean palace center and gain a rare insight into the political, administrative, economic and social organization of the area. Also new evidence is expected to come to light about the Mycenaean religion and linguistic and/or palaeographic issues.

The excavations of the Sanctuary of Apollo Amyklaios

The systematic excavation conducted in the framework of the 5-year Amykles Research Programme and completed this month under the direction of the Professor Emeritus of the National and Kapodistrian University of Athens Angelos Delivorrias, Dr. Stavros Vlizos (Ionia University) and the supervision of the Ephorate of Antiquities of Laconia, has revealed the continuation of the precinct on the western side of the Aghia Kyriaki Hill, where the Sanctuary of Apollo Amyklaios is being located, 5 klm south of Sparta.

This important find is completing the more than encouraging results of the excavation works so far. From 2009 until 2013, the whole surface of the Aghia Kyriaki Hill, connected with the function and monuments of the sanctuary, has been thoroughly investigated. Remains of the Early-Helladic/Middle-Helladic settlement were located at the top of the hill and the first monumental phase of the sanctuary was dated back to the Late-Geometric period, based on the discovery of the older precinct. At the same time though, the location of the foundation trench of the so-called Throne of Apollo has offered new evidence about the dimensions of the building. At the northwestern side there is a monumental portico completing the picture of the Archaic sanctuary.

This year’s investigations also changed the view that the precinct had a horse-shoe form, as it runs through the whole western slope of the hill, reaching a length of 50 meters and preserved up to a height of 1.20m. On its whole length the wall rests on the natural porous rock of the hill, which has been carved to create two terraces of 2.50m total width. Questions about its further route towards the south and its connection to the known corner of the monumental precinct remain unanswered. In the biggest part of the wall the subfoundation of big rough stones is being preserved, as well as parts of the inner masonry of big breccia stones, limestones and porous stones. The building of the wall cannot be dated as the layers and movable finds are disturbed. Interventions on its outer side however can be dated to the Late Antiquity and the Early Christian years.

Based on the excavation survey, at the northwestern side of the wall, near the monumental entrance to the sanctuary, a Roman era construction has violated part of it to build a cistern (4x4m). In this building, which is very well preserved, the floor is made of square clay plaques, while the inner wall surfaces are covered with hydraulic plaster. This room contains a unique find: in the centre of the room an intact Doric capital with hypotrachelium was found. Due to this unusual typology it can be attributed to the Apollo Temple, as a similar one (now in the Archaeological Museum of Sparta) had been found during past excavations in the sanctuary.