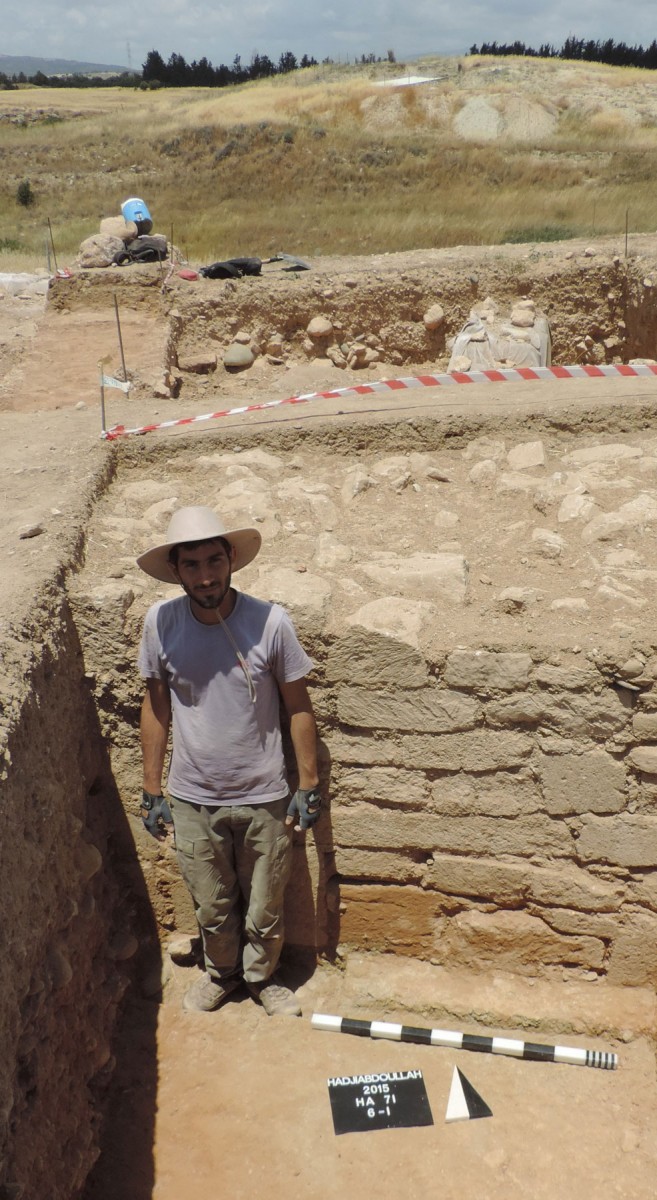 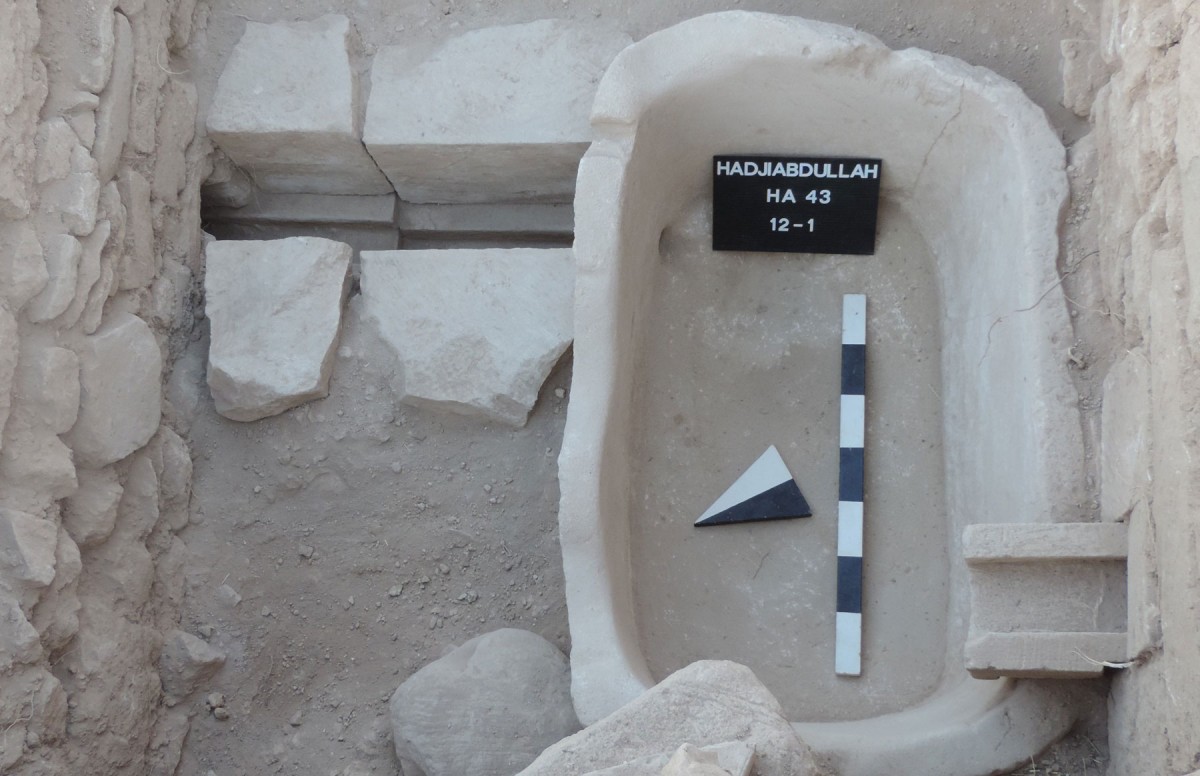 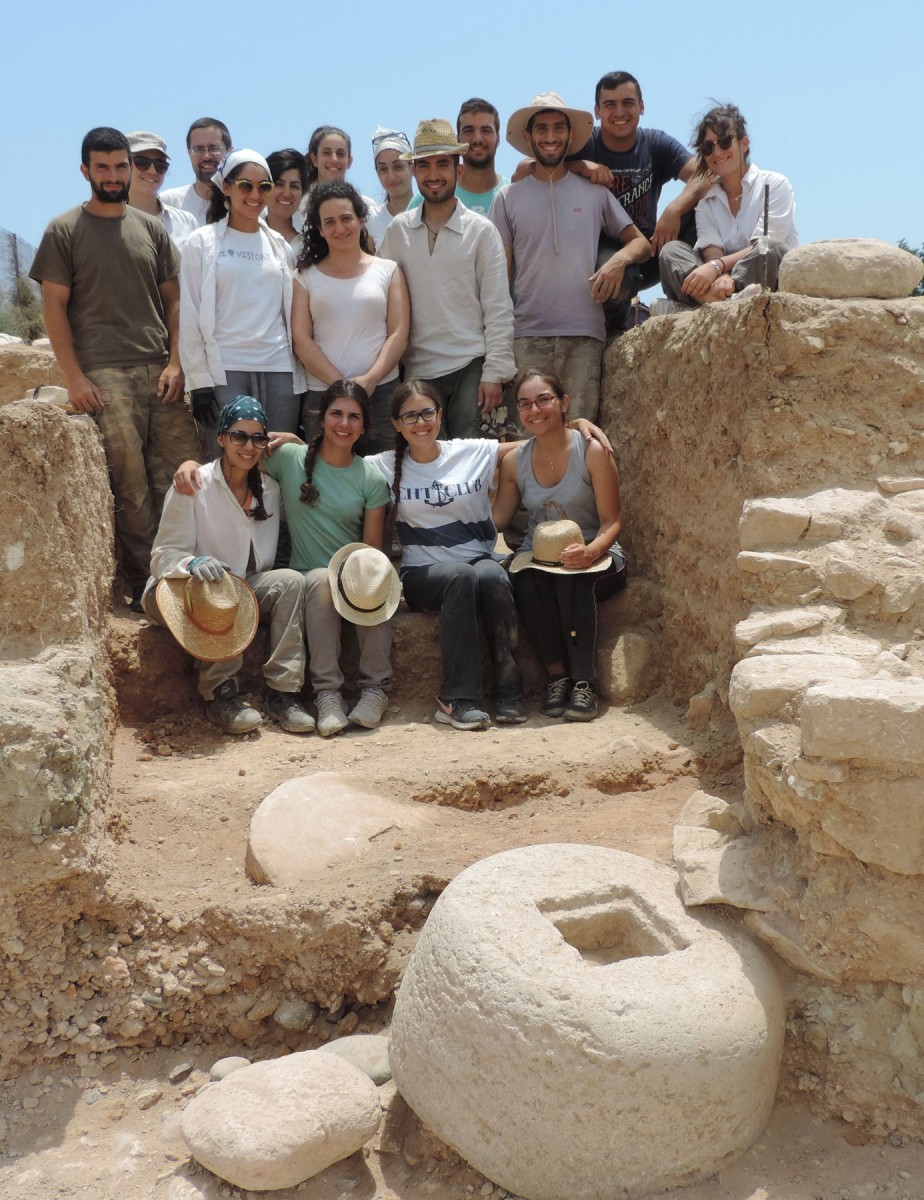 2015 Excavations of the University of Cyprus at the site

Τhe tenth season of field work at Palaipaphos (modern Kouklia), Cyprus, has been completed. This year’s (2015) six week investigations focused on the exploration of a monumental complex, which runs along the north side of a walled citadel on the Hadjiabdoulla plateau. The plateau is situated at a short distance to the east of the sanctuary of the Paphian Aphrodite and was the administrative centre of the royal dynasty that ruled the city-state of ancient Paphos in the 5th and 4th c. BC.

This year’s investigations clarified the complex’s main function and also revealed that it was built according to a specific architectural design, which aimed towards the creation of storage units and industrial installations. The Western complex (there is a second monumental complex to the east, with a different orientation) is comprised of a long citadel wall (3 metres wide) that runs 65 metres along the plateau. 15 metres to the north of the fortification wall there is a curtain wall that also functioned as a buttress built on the edge of the steep slope. A series of cross-walls running parallel to each other connect the fortification wall with the curtain wall and, together with side walls, divide the in-between space into multiple rooms and corridors.

All walls are stone-built and preserved to an impressive height, ranging from 1-1,5 metres (fig. 1). The floors are sealed with the collapsed building material of what once used to be the flat roofs, with a well-preserved white plaster on the outer surface; the inner surface preserves imprints of the reeds that were used for the construction of the roof. Plaster has been found covering the complex’s walls. The roofs collapsed after the complex was abandoned by the city’s authorities, most probably at the end of the 4th c. BC when the Cypriot city-kingdoms were abolished by Ptolemy I.

Large pithoi are found installed in the floors, and a large quantity of broken storage vessels, mainly amphorae, were collected from the fill layers. In at least one case, the amphorae were placed on a built platform and they seem to have contained oil. An olive press installation was identified on the eastern part of the complex. So far, two impressive millstones have been found and a large quantity of olive pips has been collected. A second installation, which remains under investigation (its function is not yet clear), comprises of a stone bathtub placed in a narrow passage between stone channels (fig. 2). In another area, modest quantities of slag were collected, possibly indicating a metalworking installation.

The construction of the Western complex dates to the late Cypro-Archaic period (around the end of the 6th c. BC). However, the storage and industrial quarters continued to be used even after the Paphian dynasty was terminated, perhaps as late as the end of the 2nd c. BC, as indicated by a substantial number of imported amphorae dating to the Hellenistic period (from Knidos, Rhodes, Kos and Chios). Potters’ stamps of the 2nd c. BC have been identified on the handles of two of the amphorae.

The earliest locally produced amphorae found in the complex date to the 6th c BC, whereas during the Cypro-Classical period (5th and 4th c. BC) products were introduced to the royal citadel in amphorae from the Aegean (Chios, Thasos, Mende), the Syro-Palestinian coast and perhaps Egypt. The classification of the amphorae was conducted by Dr. Antigone Marangou, Cypriot professor at the University of Rennes, France, who joined the excavation’s team this year.

Locating and excavating previously unknown monuments of ancient Paphos is the outcome of the application of various innovative methods of landscape analysis, which aim towards identifying the urban structure of the capital city of Ancient Paphos. Maria Iacovou’s research team comprises mainly of young post-doctoral researchers from Cyprus (the University of Cyprus and the Cyprus University of Technology) who cover a wide spectrum of specialisations that are necessary for conducting landscape archaeology.

Undergraduate students, as a rule from the Department of History and Archaeology of the University of Cyprus, are also trained in excavation methods and data recording during the annual field seasons (fig. 3).

Between 2009 and 2015 the University of Cyprus team investigated 800 square metres of the Hadjiabdoulla plateau. Most of the investigated area preserves monumental architectural remains. In order to fully reveal the Western and the Eastern complexes of the royal citadel many more annual field missions need to be conducted (fig. 4).

The research is conducted by the University of Cyprus under the direction of Professor Maria Iacovou since 2006.