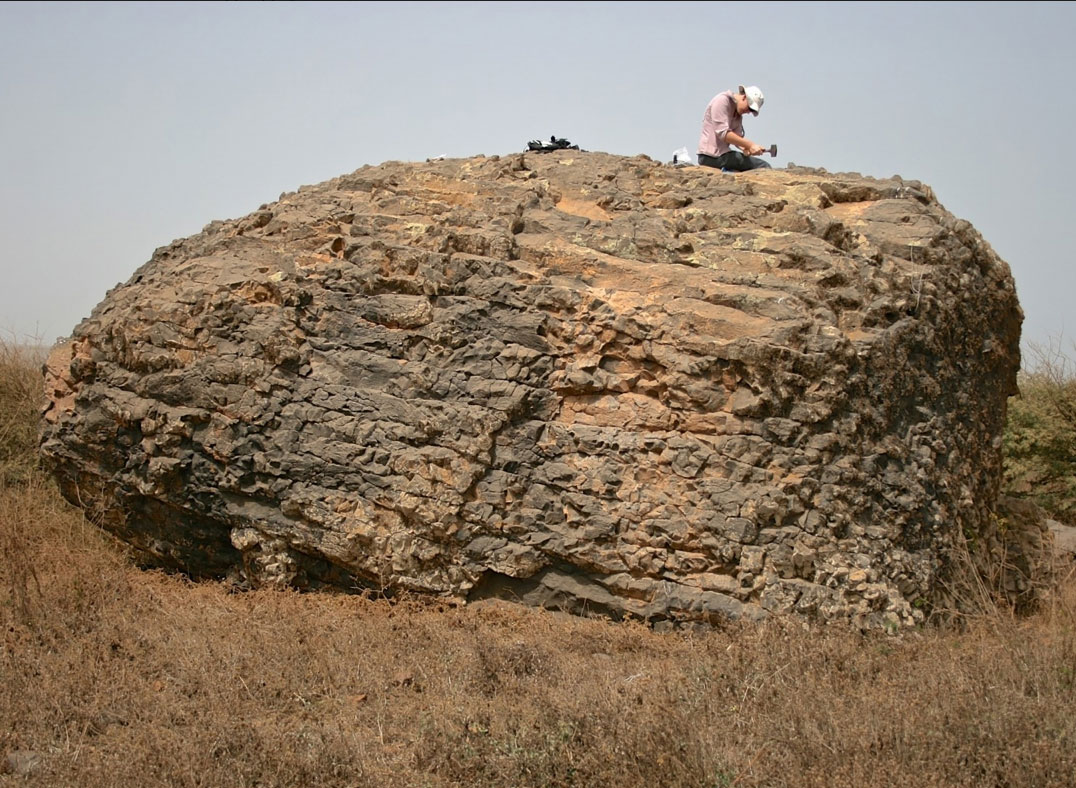 Shows one of the most prominent oceanic volcanoes on Earth, Fogo, in the Cape Verde Islands

A pre-historical sudden collapse of one of the tallest and most active oceanic volcanoes on Earth — Fogo, in the Cape Verde Islands – triggered a mega-tsunami with waves impacting 220 metres (721 feet) above present sea level resulting in catastrophic consequences, according to a new University of Bristol study published on Oct. 2 in Science Advances.

The study, led by Dr Ricardo Ramalho at Bristol’s School of Earth Sciences, provides new evidence from Santiago Island — the largest of the Cape Verde archipelago — to confirm a decades-long debate that volcanic island lateral collapses can happen catastrophically and trigger giant tsunamis.

The team found fields of stranded boulders — as large as camper vans — perched high up in the hills and up to 650 metres inland, as well as marine sediments draped over Santiago’s topography, which is 55 kilometres (34 miles) offshore from the island of Fogo. These observations imply a catastrophic turbulent surge of water, compatible only with a mega-tsunami impact which approached the island from the west, i.e. incoming from Fogo.

Using cutting-edge rock-dating techniques researchers estimated the tsunami happened approximately 73,000 years ago, an age also consistent with collapse at nearby Fogo volcano. Since sea level at the time was about 50 metres (164 feet) lower than today, they also estimate the tsunami hit Santiago with water levels rising to heights of 270 metres (885 feet) or more.

Dr Ricardo Ramalho, lead author of the study and a researcher at Bristol’s School of Earth Sciences, said: “Fogo Island presently towers 2,829 metres above sea level, and erupts about every 20 years, most recently between November 2014 and February this year. The active volcano we see today grew on top of this collapse’s scar, being almost as tall and steep as the old volcano before the collapse. The potential energy for a new collapse therefore exists but what we don’t know if or when this is ever going to happen.”

The study’s findings provides a causal link between the field evidence of marine deposits at Santiago and the steep volcanic collapse at Fogo, indicating this collapse must have happened catastrophically, resulting in the mega-tsunami.

Dr Ramalho added: “We need to be vigilant, these findings stand as a warning that the hazard potential of volcanic island lateral collapses should not be underestimated, and consequently our society needs to do more to improve its resilience to such a threat. To achieve this, we need to improve our understanding of what trigger volcanic collapses, how they operate and cause the generation of giant tsunamis, and how likely they are to reach distant coastlines. We also need to reinforce our volcano monitoring capabilities.”

The study was funded by an EU Marie Curie Fellowship. The rock-dating technique work (geochronology) was carried out at Lamont-Doherty Earth Observatory, Columbia University in the US.