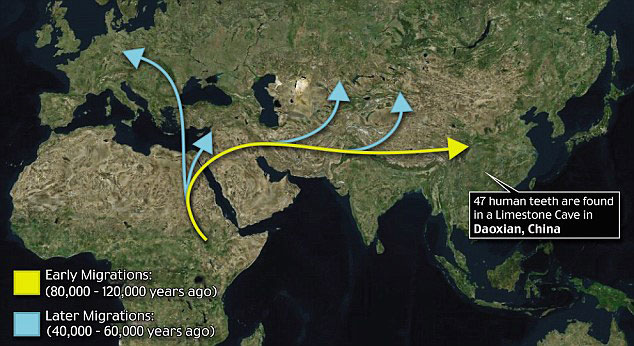 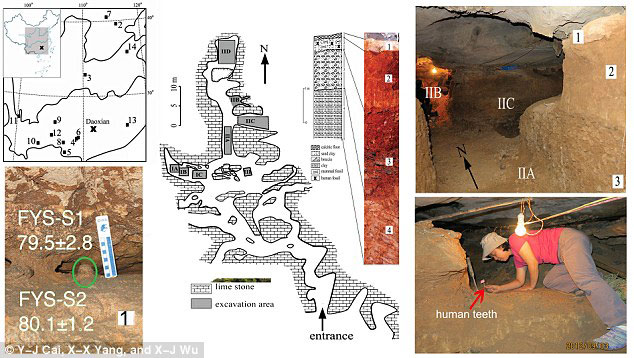 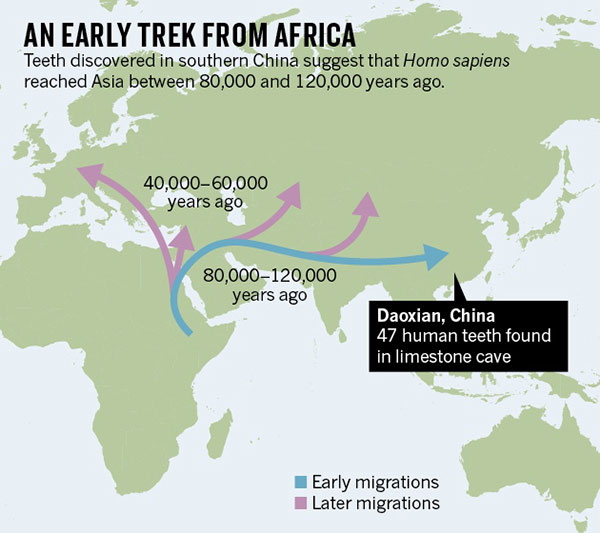 Indicating Homo sapiens was in the area before reaching Europe

A discovery of human teeth in southern China has shaken the facts on the spread of modern humans, as it places Homo sapiens in Asia much earlier than previously thought. So far scientific evidence indicated that humans moved from Africa into Europe and then into eastern Asia, but the new discovery presents evidence of the opposite.

The announcement of 47 fossil human teeth from at least 13 individuals having been found in a cave in southern China, dated between 80,000 and 120,000 years ago, provides evidence of the presence of modern humans in the area about 30,000 to 70,000 years earlier than in the eastern Mediterranean or Europe.

The teeth were found at the Fuyan Cave site in Hunan Province’s Daoxian County, sealed in a calcitic floor. The teeth have to be older than that layer, and the stalagmites above have been dated using uranium series to 80,000 years, so anything below is older than that. Also, animal fossils found with the teeth are typical of the Late Pleistocene, reinforcing the radioactive dating evidence. Therefore, the teeth could be as old as 125,000 years, researchers said.

Ancestors of modern humans are thought to come from migrant waves that crossed the Red Sea via the Bab el Mandeb straits, taking advantage of low water levels. Isolated fossils that seem to have preceded that migration, from the Skhul and Qafzeh caves in Israel, are considered part of a failed early migration. So the new discovery of the fossils in China has come as a surprise, although some researchers have proposed earlier dispersals in the past, according to Dr Maria Martinón-Torres, palaeoanthropologist from University College London. Now scientists need to consider the possibility of more than one Out of Africa migration, she argues.

paleoanthropologist Wu Liu of the Chinese Academy of Sciences’ Institute of Vertebrate Paleontology and Paleoanthropology stated that the discovery will shed light in East Asia as one of the key areas for the study of the origin and evolution of modern humans.

It is not clear why our ancestors might have chosen that particular route, but maybe the harsh cold climate and the presence of numerous Neanderthals in Europe drove them to a warmer and less dangerous place, such as southeast Asia. The new discovery might also shed light on how modern humans and Neanderthals interacted.

The research was published in the journal Nature on 14 October.