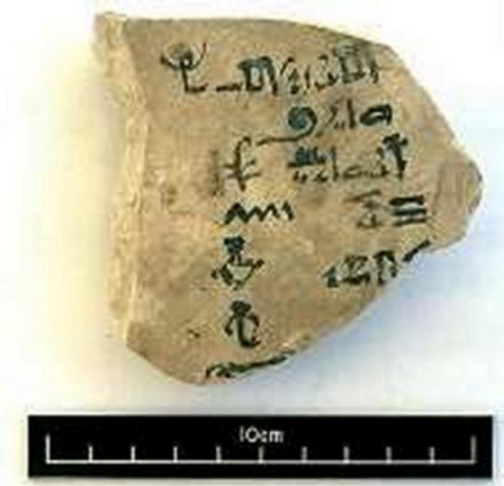 Found over twenty years ago in tomb near Luxor

A flake of limestone (ostracon) inscribed with an ancient Egyptian word list of the fifteenth century BC turns out to be the world’s oldest known abecedary. The words have been arranged according to their initial sounds, and the order followed here is one that is still known today. This discovery by Ben Haring (Leiden University) with funding from Free Competition Humanities has been published in the October issue of the Journal of Near Eastern Studies.The order is not the ABC of modern western alphabets, but Halaḥam (HLḤM), the order known from the Ancient Egyptian, Ancient Arabian and Classical Ethiopian scripts. ABC and HLḤM were both used in Syria in the thirteenth century BC: cuneiform tablets found at site of ancient Ugarit show both sequences. Back then, ABC was still ‘-b-g (‘aleph-beth-gimel). This sequence was favored by the Phoenicians who passed it on to the Greeks, together with the alphabet itself. Thus a-b-g found its way to the later alphabets inspired by the Greek and Latin ones.

The ostracon was found over twenty years ago by the British Egyptologist Nigel Strudwick in an Ancient Egyptian tomb near Luxor. The text has never been understood, however, until it was deciphered by Ben Haring, a Dutch Egyptologist working at Leiden University. Haring made his discovery in the context of a research project on Ancient Egyptian identity marks funded by the Netherlands Organization for Scientific Research (NWO).

The text is an incomplete list of words written in hieratic, the cursive script used in Ancient Egypt for some 3,000 years. To the left is a column of individual signs that appear to be abbreviations of the words. Very possibly they even render the initial consonants of the words, which would make them alphabetic signs.

The hieratic script and the related hieroglyphic script were not alphabetic themselves. Yet the Ancient Egyptian scripts had an important position in the earliest known stages of the alphabet. Inscriptions in the Sinai Desert and in Southern Egypt show signs that are thought to be the earliest known alphabetic characters, and the forms of many of these characters were clearly inspired by Egyptian hieroglyphs. Most of these inscriptions still resist decipherment. Some of their characters also figure in the left column of the word list deciphered by Haring. The list is therefore a key piece for the reconstruction of the earliest history of the alphabet.